(1). Edge-triggered (this type of trigger is discussed in the previous article).

(2). Schmitt Trigger-its details are as under:

These types of waveforms are considered ideal in digital circuits, because they tend to rise sharply and also fall back quickly, i.e. the rise and fall time of which is fast. For example, when a computer is logged on, outputs of its gate built inside, keeps changing very quickly from one state to another or it keeps switching from one state to the other. If these signals are viewed via an oscilloscope, it resembles an ideal rectangular shaped waveform as shown in figure 5.29 (a). When these digital signals transmit and subsequently received, it happens to be in quite a decaying condition due to noise, attenuation and other factors. This has been shown in figure (b). Remember that any sort of unpleasant disruption is called noise. And a decline in intensity of any signal or switching of a signal from its actual state, is called attenuation). If these non-rectangular signals are transmitted on a gate or other digital device, an unreliable and indeterminate operation results. Therefore, in such a scenario, a Schmitt trigger is needed which receives these non-rectangular shaped pulses and generates vertical transitions on their low to high state and high to low state, as has been illustrated vide figure (c). In figure 5.30, a Schmitt trigger (mid-point) has been shown wave shaping (i.e. converting non-rectangular wave to a rectangular waveform). On the right side of this figure, a typical digital signal is also visible, the low to high and high to low edges of which are exactly vertical. It means that rise and fall times of this particular signal are very fast i.e. this waveform rises and falls in a very fast manner. The rise and fall time of waveform on the left side of this Schmitt-triggered inverter’s symbol, is quite slow (that’s this waveform rises very slowly and also falls very slowly). If this waveform is provided directly on different types of counters, gates or other digital circuits without using a Schmitt trigger, it will lead to an undependable and unpredictable sort of operation. A Schmitt trigger can restore an input signal to its original state (i.e. digital signal) and thus can render this signal more effective. This process of restoring a signal to its actual form or reshaping of the signal is known as signal conditioning. Therefore, Schmitt trigger has vastly been used in digital circuits for signal conditioning. 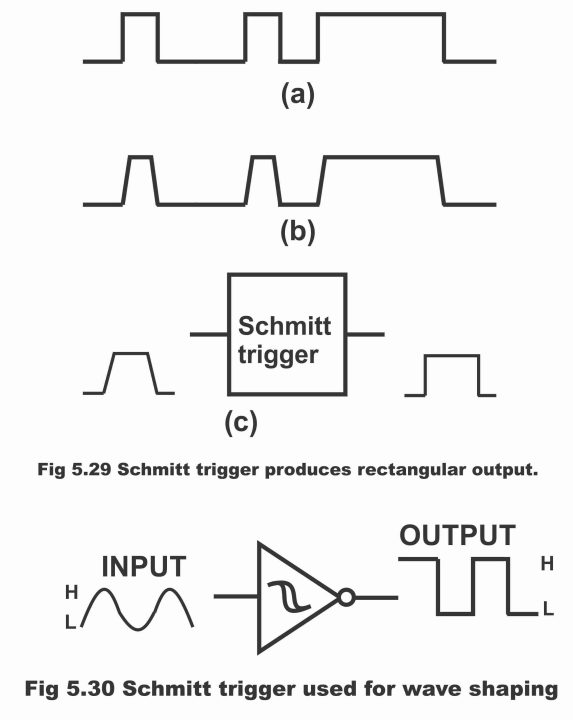 We have come to know from the above-mentioned explanation that Schmitt trigger is an electronic circuit, which consists of just two stable states i.e. it has two input threshold voltage levels and its application as a signal conditioning device is extremely beneficial. When Schmitt trigger is applied a sinusoidal (which resembles a sine wave) waveform or a triangular waveform or any other periodic waveform, it produces a rectangular form output, the leading and trailing edges of which are really sharp. As the rise and fall time of this sharply rising or falling waveform is very fast, therefore such waveform is considered very suitable for all types of digital circuits. 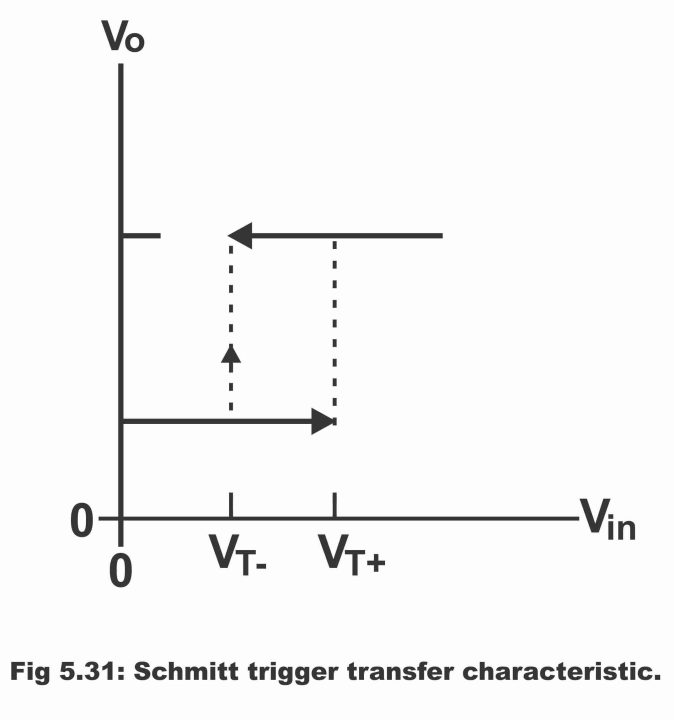 In figure 5.32, voltage profile of Schmitt trigger inverter TTL 7414 has been represented. In this figure, switching threshold of positive going voltage and negative going voltage have separately been revealed. It is clear from the figure that when input voltage rises above 1.7 volts, output switches towards low state (i.e. output turns low from high) and when input voltage decline below 0.9-volt, output switches from low state to high state (i.e. output turns from low to high). The difference found between these switching voltages (1.7V and 0.9V) is called hysteresis. This hysteresis offers an outstanding noise immunity (i.e. abolishes unpleasant or unwanted interruption in signals) and ensures fast switching. Remember that TTL- 7414 is a hex Schmitt trigger. Hex means a circuit in DIP consisting of six Schmitt triggers as has been illustrated vide figure 5.33. In the figure, hysteresis sign inside each inverter represents trigger’s function. 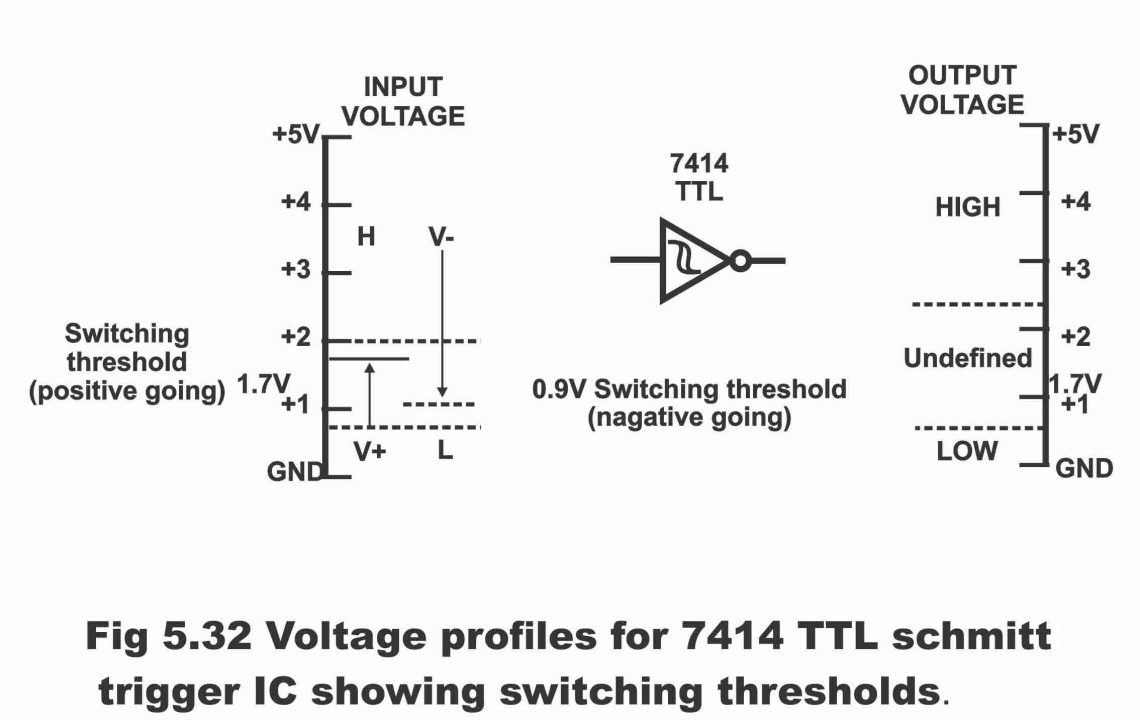 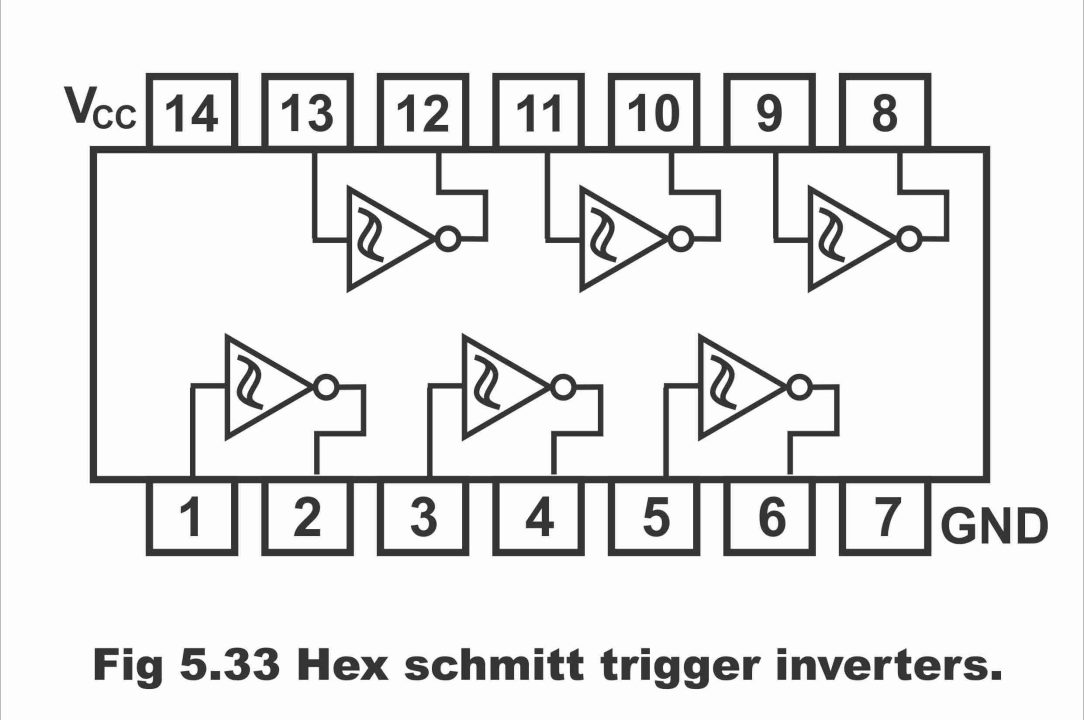 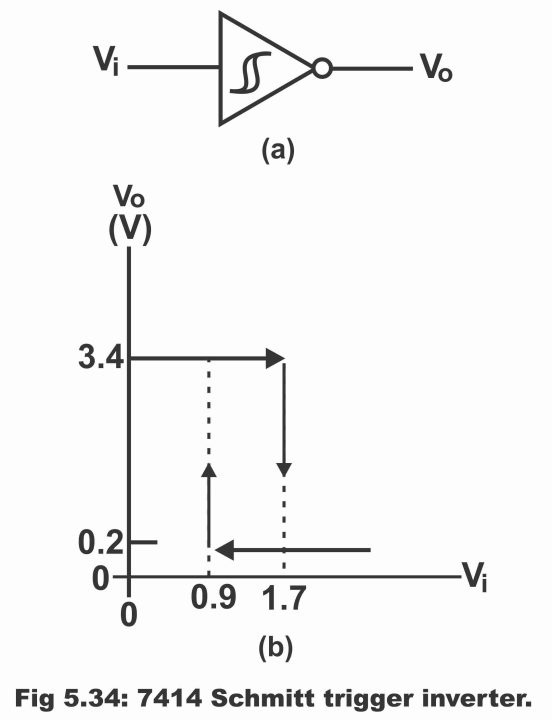 The hysteresis characteristic of a Schmitt trigger is quite effective for conversion of noisy signals or slow rise time signals to digital signals. In figure 5.35 (a), a noisy signal has been exhibited. If this signal is applied on to a common TTL-7414 inverter, multiple pulses will be produced on its output as can be seen via figure (b). Every time an input signal crosses 7404 threshold voltage, it tends to operate, as a result numerous output transitions are produced. When it is exerted alongside an edge-triggered circuit, it will produce several positive transitions (PTs) and multiple negative transitions (NTs). Schmitt trigger will do away with these redundant multiple transitions. This has been denoted in figure (c).  When input rises above VT+, output turns out to be low. However, this output does not change its condition again until input falls below VT-. As such, when inputs slashes below VT-, output turns high once again and it remains high until input exceeds VT+. As a result of such a continuous operation, output is received in nearly digital signals by means of a Schmitt trigger, as has been illustrated vide figure (c). Remember that another advantage of Schmitt trigger is that its output changes so fast (i.e. switches from low to high or high to low) that it never penetrates into indeterminate or undefined region.