Power diodes play an important role in power electronics circuits in order to increase power handling capacity of the power diode few changes are done in the structure of the diode. Power semiconductor diodes are used to perform various like rectification, freewheeling energy feedback etc. They are used mainly in uncontrolled rectifiers to convert AC to fixed DC voltages and as freewheeling diodes to provide a path for the current flow in inductive loads. Power diodes are similar function to ordinary PN junction diodes; however power diodes have larger power, voltage and current handling capabilities. In power diodes we have three in which one layer is lightly doped while the other layer is highly doped. The advantage of the lightly is that the reverse blocking voltage capability increases as well as the current rating increases.

Diode can be made of either of two semiconductor materials silicon and germanium. Power diodes are usually constructed using silicon. Silicon diodes can operate at higher current and a higher junction temperature and they have greater reverse resistance.

The structure of a semiconductor diode and its symbol are shown they are used for the lower frequency application like rectification due to their high recovery speed. The diode has two terminals an anode A terminal (p junction) and a cathode K terminal (N junction) at low frequencies these diodes are capable of handling current from very low values to high values. When the anode voltage is more positive than the cathode in power diodes the anode of the diode is made very highly doped p-type material which can withstand voltage in kv, the diode is said to be forward biased and it conducts current readily with a relatively low voltage drop. When the cathode voltage is more positive than the anode, the diode is said to be reverse biased and it blocks the current flow. The arrow on the diode symbol shows the direction of conventional current flow when the diode conducts the voltage rating are from 50V to 5KV.

These diodes have low recovery time as compare to general purpose diodes. Therefore they are turned off more quickly and hence can be used in the high frequency applications such as diodes converter and dc-ac converters.

Extremely small from several μA to tens of μA

Approximately tens of nS to 100 nS

The Schottky diode has the rectifying IV characteristics very similar to that of the pn-junction diode but the on state voltage drops across it is very low (0.3 to 0.4V ) as compare to other diodes.

In Schottky diode we used N-type of semiconductor and for metal chrome, platinum or tungsten is used. So here in the both materials both materials the electrons are majority carrier and when this two metal are join then the electrons from the n-type material will flow to the metal and that will establish heavy flow of the electrons now since the injected electrons are high energy then the compare to the metal so these carriers are known as hot carriers and that is why the schottky diode is also called hot carrier diode.

When the electron from the n-type material to the metal they will still the majority carrier so the Schottky diode is unique due to the majority carrier or in other words it is unipolar device. So due to the flow of electrons in the region near the junction will get depleted the electrons and due to that the depleted region will be found near the junction. In the addition of the charge carriers to the metal we will form negative wall near the boundary and due to that the surface barrier will be created between the two materials due to this barrier the further flow of electrons will be restricted.

The Voltage-Current Characteristics of a diode:

The V-I characteristics of a diode. When forward-biased the diode begins to conduct current as the voltage across its anode (with respect to its cathode) is increased. The current will increase rapidly when the voltage approaches the knee voltage which is about 1 V for silicon diodes. This increase in current can be limited only by resistance connected in series with the diode as in the power diode we have three layers the diode will conduct pn region and it will operate in the reverse in np region. The depletion are in the power diode is maximum.

With the diode is reverse biased a small amount of current called the reverse leakage current flows as the voltage from anode to cathode is increased this simply indicates that a diode has a very high resistance in the reverse direction as the depletion region in the reverse bias increases. As the depletion region in the power diode is high when the voltage will be increase the current will be zero or very less for some time but after the breakdown a diode allows a large current flow for a small increase in voltage. The destruction of the diode can be prevent by using current limiting resistor.

In the above figure we can see two diode one is rectifier and the other is schottly diode the forward voltage is 0.6V and 0.3V respectively for the diode when the current 50A is flowing from both diodes then we will see that the power drop across the Schottky diode is:

While the power drops across rectifier diode is:

So from the above calculation we can see that from the same amount of the current schottky diode dissipate less power than rectifier diode and hence it generate less heat.

In power electronics we deal with high voltages and currents. Therefore the detailed characteristic of a diode is not important we can treat a diode as in ideal element. The ideal characteristics of a diode. Note that when the diode is forward-biased , it has no voltage across it. The current through the diode then depends on the source voltage and other circuit elements. When the diode is reverse-biased, it has no current through it. The voltage across the diode then depends upon the source voltage and other circuit elements.

To analyse diode circuits the state of the diode (on or off) must first be found. The switch equivalent circuit can replace the diode. However in some circuits it may be difficult to figure out which switch equivalent to use for example in circuits with more than one source or with more than one diode in series. In these circuits it helpful to replace the diode mentally with a resistive element and note the resulting current direction due to the applied voltage. The diode will be on If the resulting current is in the same direction as the arrow.

Ac circuits have a voltage that varies with time. Circuit analysis can be done separately for positive and negative half cycles when positive half cycle of the AC will come diode will be in forward bias and it will conduct and will act as closed switch while when the negative part of the ac will come the diode will be in reverse bias and it will not conduct and will act as open switch. It must be noted when the voltage polarity across the diode forward biases it and when it reverse biases it.

The total power loss that occurs in a diode is the sum of the on state and off state and switching losses:

tOFF= time during which diode is reverse biased

The peak inverse voltage rating of a diode is the maximum reverse voltage that can be connected across a diode without breakdown. If the PIV rating is exceeded the diode begins to conduct in the reverse direction and can be immediately destroyed. PIV rating extends from tens of volt to several thousand volts depending upon on the construction. The PIV rating is also called the peak reverse or breakdown voltage.

The maximum average forward current is the maximum current a diode can safely handle when forward biased. Power diodes are presently available in rating form a few amperes to several hundred amperes. If a diode is to be used economically it must be operated near its maximum forward current rating.

The parameter defines the maximum junction temperature that a diode can withstand without failure. The rated temperature of silicon diodes typically range from -40 C to 200 C. Operations at lower temperature generally results in better performance. Diodes are usually mounted on heat sink to improve their temperature rating.

The (forward surge current) rating is the maximum current that the diode can handle as an occasional transient or form a circuit fault.

A power diode must be protected against overvoltage, overcurrent and transients.

When a diode is forward biased the voltage across it is low and poses no problems. A reverse biased diode act like an open circuit. If the voltage across the diode exceeds its break over voltage it break down resulting in a large current flow. With this high current and large voltage across the diode it is quite likely that the power dissipation at the junction will exceed its maximum value destroying the diode. In normal operating condition we will select a power diode whose peak reverse voltage rating is 1.2 times higher than the expected voltage.

Manufacturer data sheets provide current ratings based on the maximum junction temperatures produced by conduction losses in diodes. To design a circuit the diode current will be less than the rated value. Over current protection does not exceed a level that will increase the operating temperature beyond the maximum value.

Transients can lead to higher than normal voltage across a diode. Protection against transients which is the short surges when the device operates by the shunting excess current when the induce voltage exceeds the avalanche break potential. The arrangement shows snubs or reduces the rate of change of voltage and is commonly called a snubber circuit. It is clamping device suppressing all the overvoltage above its breakdown voltage. It automatically resets when the overvoltage go away but absorbs much more of the transient energy internally than a similar crowbar device. A unidirectional operates as a rectifier in the forward direction like any other avalanche diode but is made and tested to handle  very large peak currents

Series and Parallel Operation of Diodes:

The maximum current than can be controlled by a single diode is determined by its rated reverse voltage and by its rated forward current. Single diode may have insufficient power handling capability in high power applications. To increase power capability diodes are connected in series to increase the voltage rating or inn parallel to increase the current rating. A series/parallel arrangement of diodes can be used for high voltage and high current applications.

For some industrial applications, when the voltage or current rating of the selected diode is not enough to meet the designed rating, the diodes can be connected in series or parallel. 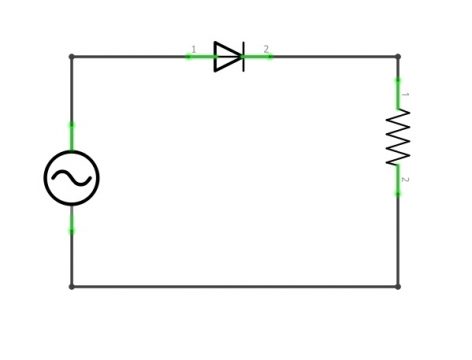 The diodes should be connected in parallel if we require high currents. In parallel connection we will keep in mind that the same amount of current is shared by the each diode. For this purpose we will select a diode which has same forward voltage drop properties. For cooling of the diodes the heat sink will be used. With changing of temperature forward characteristics of the diodes will also change. 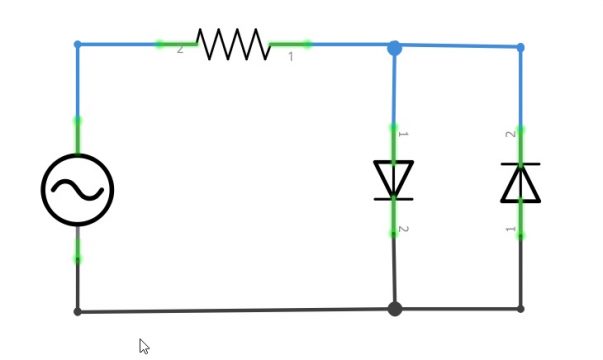