Arduino Modbus RS485 Master and Slave– In this tutorial, you will learn how to communicate between two Arduino’s using Modbus Serial Communication protocol. One Arduino will act as the Master while the other Arduino will be configured as the Slave. Using the Arduino Modbus RS485 boards, one master Arduino can communicate with Multiple Slave Arduino’s.

Modbus is a serial communication protocol developed by Modicon in 1979. It was created specifically for use in modicon PLC for industrial application but later it become standard  protocol used by a wide range of automation products for connecting industrial electronic devices. Modbus is used in monitoring; to communicate between intelligent devices, sensors or instruments and to monitor field devices using computer and HMI. It also a great protocol to use in RTU application where wireless communication is required  making it a great choice for gas and oil substation application because of its openness, simplicity, low cost development and minimum hardware requirement to support it over. Modbus has become very popular. Ethernet device is compatible with it.

In a typical Modbus implementation there is a Modbus master device and up to 247 slave devices attached to that master device each with their own unique address. The master device manages and writes data to the slave device. Data is sent over Modbus as a series of bits in the form of ones and zeros. Each of those bits is sent as voltage with zeros being sent as positive voltage and ones sent as negative voltage. Since the individual bits are extremely small. They are sent extremely quickly between the devices. There are basically three types or variations of the Modbus protocol:

Modbus was originally developed using ASCII character using messages and this version of the protocol is still in use today.

Modbus RTU means remote terminal unit which is based on serial protocol which is used building management system and industrial automation system. It is also use in data system which can be connected up to 15 meters. It is point to point communication which means it has only one master and slave.

Modbus RTU is using binary coding and CRC error checking for transmission implementation. The two modes are incompatible when they do not use the same communication protocol for example if we are using binary or ascii at the transmission side than at the receiving end we will also use the same protocols, so a device is configured for ASCII mode cannot communicate with one using RTU. Modbus RTU devices typically use one of three electrical interfaces which are:

RS232 was first introduced in 1962. This is the most common type of serial interface, it was the standard communication before the PS2 and USB became popular in the computer industry. RS232 is simple point to point arrangement which will send one bit at a time therefore it is known as serial communication. If we need to connect only one device to another and the distance between the two devices is less than 50 feet or 15 meters, then RS232 will do the job. RS232 is a specific serial protocol that defines the wiring and flow control used to send the data bits. It was originally designed to send data between computer using modems and telephone line. Let us consider two types of equipment’s that need to communicate with each other to keep it simple one device will only sends the data while other device will receive the data. In reality both sides send and receive data but if we want to understand how the communication works in one direction we can apply it to both. Data is generated by the sender which puts it in a buffer that temporarily holds the data. To get the data from the sender buffer through the buffer on the receiver we need a wire on the sender side. This wire will transmit data or the TX wire; on the receiver side receiver end it will receive data Rx wire. Once these are connected together the data can flow from the sender to the receiver. This is the simplest case but the designer of the RS-232 specification asked a few basic questions. 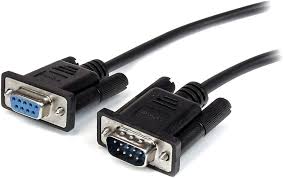 What if the receiver is missing?

The RTS CTS wire is the hardware that controls when data flows between the device for completeness sake there are two more wires defined in the RS232. Both of them are related to the modems so seldom use anymore. These are the data carrier detect or DCD which tells the modem when an analogue signal is being received from another modem and the ring indicator that tells the modem that the phone is ringing since we are talking about modem. We also need ground wire to establish where the signal voltages are referenced from this third wire is called the signal ground or SG with these wires we can communicate between two RS232 devices an arrangement is descriptively called a three wire null modem.

The control wires handle making sure there is a device on both ends and that the receiver is ready to receive the data sent are no longer being done. We can perform the same flow control function by sending special packets of data over the transmit and receive lines using special packets to control when the data is sent is called software flow control and the packets themselves are called X on and X off. When the receiver is ready for the data it sends an X on when it needs the sender to stop it send an X bar. This is less reliable than hardware flow control since the flow control packets themselves are data but it often works well enough to be worthwhile.

We can connect mouse, printer and modem with RS232. RS232 also uses a duplex transmission method. RS232 can transmit up to 1 Mbs with maximum distance up to 30 feet. The normal speed of the RS232 is 19.2 Kbs.

RS422 is an improved version of RS232 which used twisted pair cables to reduce the noise and interference; it uses signalling balancing to transmit data.

The signal becomes balanced it uses a voltage difference between the two lines as an indication of the signal value, with this method the data is able to transmit for a longer distance with faster data rates.

RS485 is used to send data and receive serial data. If more than two devices connected serially then we can communicate devices with one another. To connect more than two devices on the same line and have a distance greater than 50 feet than we will use RS485 or RS422. RS485 can travel signal up to 1 KM. For master communicating with multiple slave devices RS485 is by far the most popular method. RS485 was developed by as a replacement or upgrade of RS432 as well as RS422.

It is widely used in the many applications ranging from business industrial communication to business and home device connection. This standard can support up to 32 nodes over a range up to 4000 feet which are roughly equal to 1200 meters without a repeater. The speed that Modbus massages are sent at is referred to as the baud rate or bits per second. All devices on an RTU network must use the same baud rate. Different devices support different transmission speed but between 9600 and 19200 bit per second is typical range. Modbus module can be configured from as low as 300 to as high as over 100000. 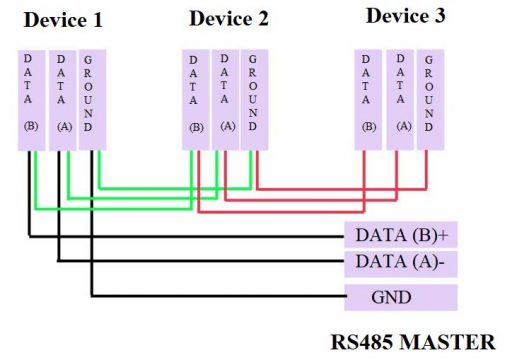 DE and RE will act as enable which will be connected with digital pin 8, we define this pin in code as master pin and pin 3 will be declare as switch. The code is very simple. All the instructions are well commented. No header files are used.

After you upload the Master and slave codes then the final step is to open the serial monitor for the Slave Arduino. On the Master side when you press the button and led on the Slave side Arduino will start blinking.