DC Series Circuits- In this article, we’re going to be looking at DC series circuits. We will cover voltage, current, resistance, and power consumption. I will explain everything with the help of very simple circuit diagrams. To make things clear and easy to understand I will also share with you the simulation results. I will use Proteus for the simulation.

No matter which complex circuit you select, you will always find electronic components connected in series or parallel, you will also find the series and parallel circuits both at the same time. To keep things simpler I will only stick to the series circuits. If you are new to the electronics and you want to learn about the DC Series Circuits then this article is for you.

You might be thinking why we need to start with the DC series circuits? The answer is, as a beginner you might be doing some basic experiments using LEDs, you might need to build a voltage divider circuit, etc. So after reading this article, you will be able to perform basic calculations, and you will also be able to use this knowledge in some practical projects.

You already know about the resistor basic definition, a resistor is a passive electronic component which is used to limit the flow of current. A resistor has no polarity, so it doesn’t matter which way you connect the resistor. So, anyhow, if we place two resistors in a line i.e one leg of the resistor is connected with the other leg of the 2nd resistor this makes the series circuit. 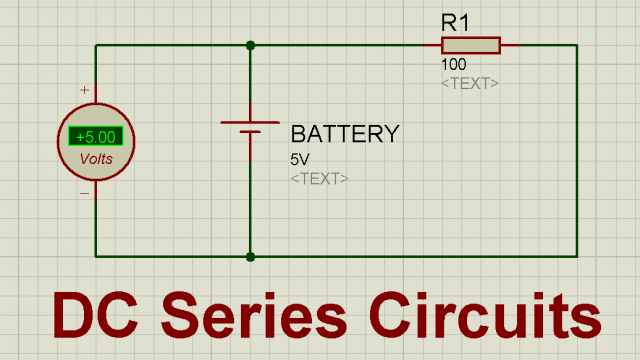 Let’s initially start with only one resistor R1 = 100 ohm. The two leads of the resistor R1 are connected with the 5V battery positive and GND contacts. If I ask you what’s the total resistance? I am sure your answer will be 100 ohm. You know in reality the resistance is a light higher, you know why? Because the wires we use has some resistance which is also added. But this value is normally too small for small length wires and we usually neglect this resistance. So, anyhow, if you go ahead and connect another resistor in the series. 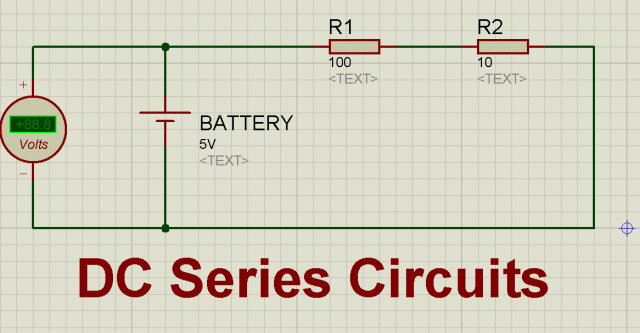 Three resistors R1, R2, and R3 are connected in Series with a 5V battery. Each resistor is 10K ohms. As all these resistors are connected in series so the same current will flow through all the resistors. By the way in these circuits I use electron flow which is from negative to positive. You might be used to seeing conventional current which is from positive to negative. Electron flow is what’s actually occurring conventional was the original theory but it’s still taught because it’s easy to understand just be aware of the two on which one we’re using. So, let’s get back to the topic. So, in a series circuit the same current will flow. Let’s check this by adding Ammeters. An Ammeter is device which is used to measure the current flow. An Ammeter should be connected in series while the voltmeter is connected in parallel “Don’t forget this”.

This is the same circuit, but this time I added Ammeters in series. You can see the same current is flowing through all the resistors. You can also confirm this through calculations.

We know from the Ohm’s law

This time I made a little change that is I changed the value of the R2 resistor, now it’s 1K. As the total resistance changed so the current value also changed, but you can see still the same current is flowing through the series circuit. Let’s solve a very practical example, you will always need this.

I am sure you are already familiar with the fact that current is the flow of electrons. Here I am going to give you a very popular example, the flow of electronics is just like the water which flows through the pipe so the higher the current the more electrons are flowing. The unit of current is ampere and the short form is Amps. A device called Ammeter is used to measure the current which I already explained. I have already explained the method of measuring the current using a Digitalmultimeter. The voltage meter is very simple to use we only need to connect the test probes of the multimeter in parallel with the component or device across which we need to measure the voltage. Let’s say you want to measure the voltage of a battery all you need is to connect the positive test lead of the voltage meter with the positive terminal of the battery and the GND test lead of the multimeter with the GND terminal of the battery and you will the voltage reading on the multimeter display. While Ammeter is connected in series, this way the current flowing through the circuit will flow through the Ammeter. This will also add some resistance to the circuit but normally this is too small and is usually neglected.

Multimeters are really cool as they are used for measuring the voltage, resistance, continuity, short circuit, etc. So, I highly recommend you should get one fast. I have provided the Amazon purchase link. Now, we will take a look at some practical examples.

You know very well, while learning electronics, the very first experiment that we start with is to light up an LED “Light Emitting Diode”. You think it’s easy? Well, trust me I have seen hundreds of guys calculating a wrong value, and they end up in burning the LED. You first need to know about the LED specs like the current and voltage it needs. If you have a 5V LED and the voltage source is also 5 volts, then there is no need for any calculation, you can go ahead and connect the positive leg of the LED with the positive terminal of the battery and the GND leg of the LED with the ground terminal of the battery.

What if the LED voltage is different from the battery voltage? Let’s say we have an LED the following specifications.

There is no doubt this LED will be damaged in no time. Now, you have to options to successfully light up this LED. You can reduce the source voltage or you will need to use something that will drop the excess voltage. Now the easiest way is you can use a resistor in series with the LED. As you can see in the following circuit an LED D1 is connected in series with the Resistor R1 and its value is unknown. Now, we have to find its value.

The things we already know are;

The battery voltage or the source voltage is 5 volts.

The LED current is 10mA, and

So, using the Ohm’s law we can find the value of the resistor. As we know

As the LED drops 2.5V so, we will need to subtract this voltage from the battery voltage.

So, the resistor value should be at least 200 ohms. In the market not every value resistor is available, so what you can do, you can select the next higher resistor. I usually use 330 ohm resistor. Never use a resistor value which is less than the calculated value otherwise your LED will heat up and the life span will reduce. For the best performance use a slight greater value resistor. As you can see in the circuit below.

You can see the current is little reduce now it’s 7.52mA and it will remain cool.

Now, let’s say, you have the same LED but this time the voltage source is 12 volts. We will do the same calculations.

This time you can see I am subtracting 2.5 volts from the 12 volts as our battery is 12 volts.

Now, you can clearly see the current is pretty close to the 10mA, the value is a little below the 10mA and this is because we are slightly using a greater value resistor which is just perfect. Now using the same method, you can light up any LED using any voltage source. You already know, resistance opposes the voltage being applied and the resistance is measured with the unit Ohm Ω.

If you use a lower value resistor, you will damage the LED. If you use the calculated resistor or a bit higher it will work great, and if you use a much larger value then the LED won’t glow. Because the whole voltage will drop across the resistor.

The Flow of electrons is due to the voltage which is the pushing force and this resembles to the pressure in Pipe, now as a common sense, higher the pressure and the more water will flow. The same thing applies to the voltage, the more voltage you apply the more electrons will flow. You can test this by connecting a variable voltage source with the LED or a small DC motor. Let’s take the example of an LED. Let’s assume we are using the same 2.5V and 10mA LED.

I further increased the voltage and it started to glow brighter. 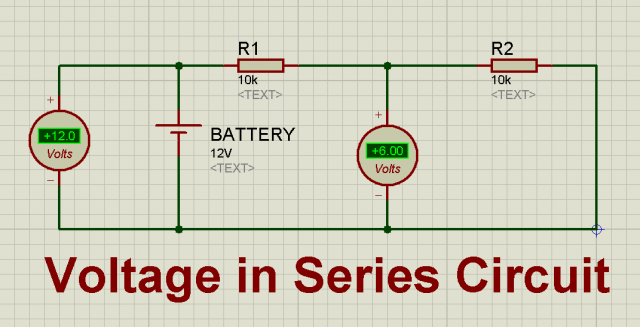 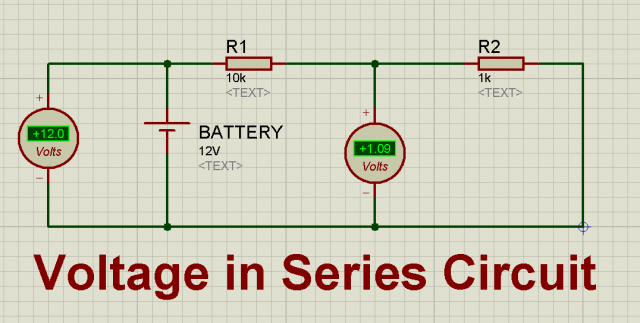 Let me give you a very practical example. I have been using this for quite a long time in different Arduino based projects.

Resistor in Series with a Push Button:

So, the voltage between the resistor and the push button is 5 volts, you can take a wire from the middle and connect it to the Arduino’s IO pin. The pin will read 5 volts.

When the Push button is pressed the voltage drops to 0 volts. Now you can use this push button as the sensor. When the button is open it gives 5v to Arduino and when the push button is closed it gives zero. Depending on the 5v and 0 signal you can perform different tasks by the Arduino.

We can use the following formulas to measure the power consumption.

How can a resistor consume power?

We do not say consumed because the same current flows all the way round the circuit, like the blood round the circulatory system. The energy or power needed to push the current through the resistor comes from the battery and ends up as heat in the resistor. By the same analogy that’s like the oxygen in the bloodstream(not the best analogy I’d admit). Resistors “restrict current”, “dissipate” Power, and “consume” energy.

An interesting example would be to have 1 volt LED’s and 12 volt power supply. use one resistor and say, 10 LED’s calculate the voltage drop needed by the resistor under this example. 10 LEDs at 1 volt would mean the LED’s in series would drop the voltage by 10 volts.

But, since you have 10 of these, and each consumed 224mW of power, the total resistors would consume 2.24 watts of power.

What is Resistor, different types of resistors and their applications