A rectifier is a device that converts AC to pulsating dc the process of this conversion is called rectification. There are two types of rectifiers namely.

For half wave rectifier one diode is used. An alternating voltage through a transformer is applied to a single diode which is connected in series with load resistance RL as shown in figure (1) below.

For the +Ve half cycle of input AC voltage the diode is forward biased (As P-region of the diode is connected with the +Ve terminal).  Hence there will be current across the load resistance RL.

Now we will consider the -Ve half cycle of the input A.C voltage for which the upper terminal of T/F secondary is “-Ve” and lower terminal is “+Ve”. The diode is then reversed biased and will not conduct (As p-region is connected with -Ve terminal). Hence it is clear that it rectifies only half of the input cycle, that is why it is called as Half Wave rectifier. It is noted that -Ve half cycle is suppressed that is it is not utilized the output is shown below

In the end we will talk in detail about each of these filters.

A full wave rectifier uses two diodes D1 and D2 and has a transformer which is tapped at the center at point c as shown in figure below. The center tap is taken as 0 voltage reference. During the +Ve half cycle the upper terminal of the transformer secondary is +Ve and the lower terminal of the T/F secondary is –Ve. Diode D1 is forward biased and diode D2 is reversed biased. Hence diode D1 will conduct and there will be current flowing through the load resistance RL as show figure below.

Now for the -Ve half cycle the upper terminal of the T/F secondary is –Ve and lower end of the T/F secondary is +Ve. So diode D2 is forward biased and diode D1 is reversed biased. Hence diode D2 will conduct and hence there will be current flowing through the load resistance RL. So it is clear that both half cycles (+Ve and -Ve half of the input A.C voltage) are utilized. The input cycle with output of diode D1 and O/P of diode D2 as well as their combine outputs are shown as. 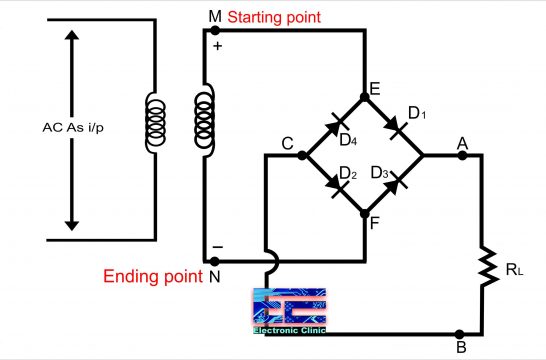 For the full wave bridge rectifier there is no need for a center tapped transformer. The full wave bridge rectifier uses 4 diodes. During the +Ve input half cycle upper terminal “M” of the secondary side of T/F is +Ve and lower terminal “N” is -Ve. Diode D1 and D2 will be forward biased and current will flow through load resistance RL while diode D3 and D4 are reversed biased path of the current will be MEABCFN. Now consider “-Ve” half of a cycle as shown. 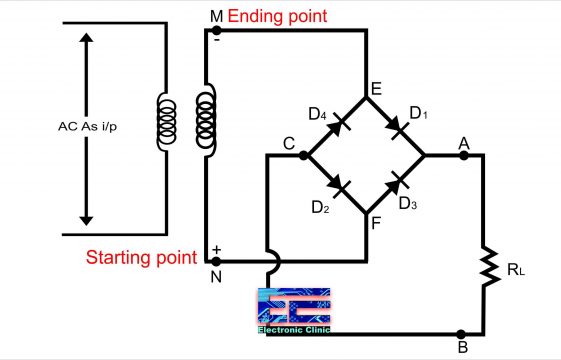 If you take a look at the output of Half wave rectifier, Full wave center tapped transformer rectifier, and the Full wave bridge rectifier, you will find that the output is pulsating DC. We need smooth DC voltage or pure DC voltage as the output. To get rid of the ripples or AC components or pulsating DC we use filter circuits. A filter is basically an electronic circuit that only allows the DC components and blocks the AC components of the Rectifier output. Different types of filter circuits are connected with the rectifier circuit to convert the pulsating dc or fluctuating DC into pure DC. Because the AC components are not useful. If you look at the output waveforms of all the three rectifiers you will see the pulsating Direct Current DC, which is not constant because it fluctuates with respect to time. So, if you apply such pulsating DC voltage to any device, the device will not work properly because this pulsating dc acts as if the switch is ON and OFF at a faster rate. We don’t need this ON and OFF effect this can really damage the device. The whole point is after the process of rectification a filter must be used to get rid of the pulsating DC. We have different types of filters which can be used to remove the ac components. Let me explain this with Proteus simulations

In the Proteus simulation you can see I have connected 18V and 50Hz AC supply “which you can think of as the transformer” a load resistor R1 is connected. You can see the output on the Oscilloscope is a pure sine wave consisting of the +Ve and –Ve half cycles. To convert this into a Direct Current DC a rectifier is used. Let’s make the half wave rectifier. All we need is to add a diode.

I did some modifications in the circuit that is I added a diode in series with the load resistor R1. On channel A of the Oscilloscope I connected the AC input and on Channel B of the Oscilloscope I connected the output of the Half Wave Rectifier. You can clearly see the output is the pulsating DC which has the AC components and it’s not pure DC. It has ripples which needs to be removed in order to make it pure DC. To make it more clear, you can see I added a volt meter. The voltage is not exactly 0 but it fluctuates between the maximum and minimum values, this is because the output DC voltage is pulsating.

This is the kind of pulsating DC output which you will get for all the types of the rectifier circuits. Now, at this point you decide which filter you are going to use to remove the ripples and make the output more pure. As said earlier we have different types of filter circuits.

The most commonly used filter circuits are

Now, you can see after adding the capacitor which is 470uF the voltage got stable, now the voltage isn’t changing. It has successfully blocked the AC components. I am not saying it 100% blocks the AC components still a very small part of it goes to the load resistor, but maximum part the ac components is blocked. When the capacitor is fully charged, it holds the charge until the input AC supply to the rectifier reaches the negative half cycle.

When the negative half cycle is reached, the diode D1 gets reverse biased and stops allowing electric current through it. During this non-conduction period, the input voltage is less than that of the capacitor voltage. So the capacitor discharges all the stored charges through the load resistor R2. This prevents the output load voltage from falling to zero.

The next filter circuit that we are going to talk about is the Inductor Filter which is also known as the choke filter. Let’s take a look at the circuit diagram, 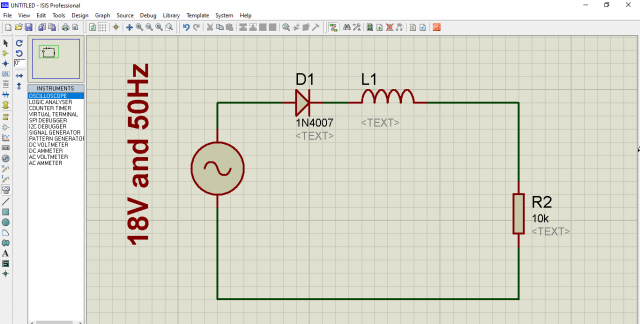 The LC Filter is seriously an amazing filter as it combines the effectiveness of both the filters “Inductor filter” and “Capacitor Filter”. The rectified output is first given to the inductor which removes the AC components and allows the DC components to pass. The filtered output voltage still has some components of the AC. The capacitor grounds the AC components and allows the DC components to pass to the Load R2. This way we get pure DC. The output voltage as you can see is pretty constant. So, the output of this filter is better than the output of the previous two filters capacitor filter and Inductor filter. In the simple shunt capacitor filter circuit explained above, we have concluded that the capacitor will reduce the ripple voltage, but causes the diode current to increase .This large current may damage the diode and will further cause heating problem and decrease the efficiency of the filter. On the other hand, a simple series inductor reduces both the peak and effective values of the output current and output voltage. Then if we combine both the filter (L and C), a new filter called the L-C filter can be designed which will have a good efficiency, with restricted diode current and enough ripple removal factor .The voltage stabilizing action of shunt capacitor and the current smoothing action of series inductor filter can be combined to form a perfect practical filter circuit. 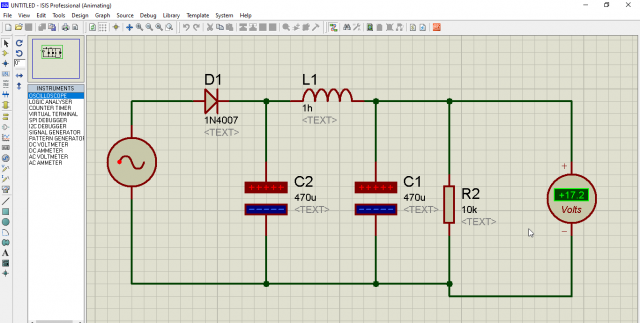 The Pi Filter or CLC filter is the most commonly used filter in power supplies, and we can say this filter has the perfect DC output with most of the AC components removed. Now, if you want you can add more combinations as per your requirement. This is the reason, if you ever get the chance to open a power supply, you will see inductors, capacitors, and resistors.