For loops in MATLAB

The typical structure of a for loop in Matlab, we start off with a loop variable which is used to determine the number of loop passes:

The loop variable has m is represent the initial value “s” is a step or incremental value and “n” represents the final or terminating value and for each value of the loop variable a statement or a number of statements are executed.
Let’s take a lookat an example:

In this case i is our loop variable i has an initial value of 2 an incremental or step value of 2 in a final or terminating value of 4 and for each value of I our statement is evaluated as x= i2.

Let’s take a look at a flow chart of our example which can help demonstrate each loop pass our loop variable i has an initial value of 2 and this initial value of I is not greater than our final value of 4 that statement is false and so we assign a value to x which is equal x= i2 now as the value of I = 2 so the value of x will be equal to 4. So that is the value assigned to x and that completes our first loop pass. 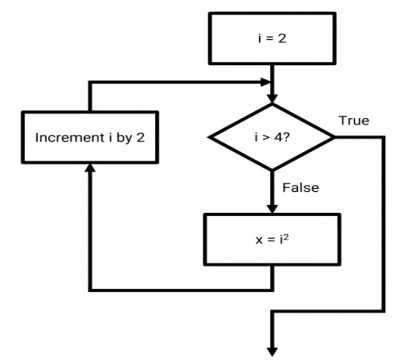 Let’s take a look at implementing this example in MATLAB first we will start a new script file as we have discussed in the previous tutorial how to create script file. In the MATLAB editor we will create for loop which will start with the word for and then we will have a space and now we need to assign an initial value a step or incremental value and a final or terminating value to our loop variable. 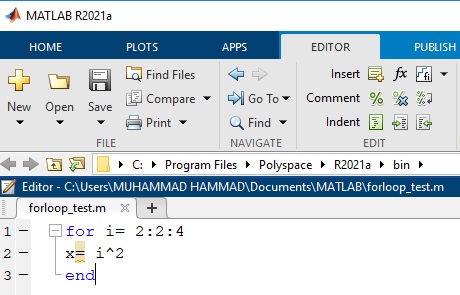 So our loop variable is I and it is assigned so we do an equal sign the following values we start with our initial value which is 2 then we do a colon our incremental or our step value which is also two then a colon and our final or terminating value which is equal to four. Now our loop variable has been setup. So press the enter key which will start a new line that will be automatically indented .Now we are going to assign a value to x which is equal to x= i2. So i = 2 which will be the current value of the loop variable and then it’s squared. Now normally you would end this statement with a semicolon to suppress the output in this case I am going to remove that semicolon so the value of x is output to the command window. now I am going to hit enter and then our for loop ends with the word end which again is automatically indented.Now we are ready to run our program. so I am going to go to the top of the screen and click run.Now the program has run and you can see the output of the program in the command window at the bottom. 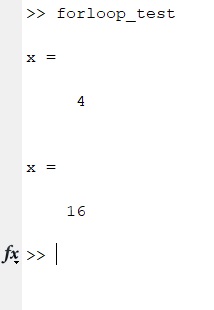 Now what you will see here is that we have two values for x one value is x was equal to 4 on the first pass of the loop and x was equal to16 on the second pass of the loop.Now on the third pass our loop variable had a value of 16 which was greater than our final or terminating value of 4 and that is why you do not see a third value assigned to x. In addition in the workspace on the right hand side you can see the final value for each of our variables so i had a final value of 4 before the loop terminated and x had a final value of 16 this completes our example.

Indexing and storage in arrays using for loop:

We are going to use a for loop to store data inside of an array using an array index. First I will introduce you to how arrays are handled in MATLAB then we will take a look at an example. We are going to write a script file to evaluate the function (y) where y is equal to:
y= x2
For x starting at a value of 0 and ending at a value of 8 in increments of 2.
X= 0, 2, 4, 6, 8
We are going to do this using a for loop. First we need to understand how MATLAB handles arrays a numerical array is an ordered collection of numbers and in this problem our independent variable x can be expressed as an array as follows:
X= [0, 2, 4, 6, 8]
In MATLAB square brackets are used to define an array and each element in a row array in this case is separated by a comma or a space. My personal preference is to use a comma to ensure readability and to prevent any errors. This array has five elements zero is our first element two our second element four is our third element six is our fourth element and eightis our fifth element to refer to a specific element in an array you can use an array index. For example x(3) refers to the third element in the arrayand in this case that third element has a value of 4. In this problem we want to calculate:
y= x2

For each value of x and this is an element by element operation so we don’t want to square the entire array we want to square each individual element. so we will square the first element then the second element,the third element, the fourth element and finally the fifth and final element. Now let’s take a look at how we will solve this problem using a for loop in MATLAB. So here is the traditional structure of a for loop:

and how we would use a for loop to solve this specific problem. Now let’s walk through each component of our program. First we initialize our variable x our loop variable in this case is equal to the array index i which has a starting value of 1a step or incremental value of 1and a final value of n. Where in this case the value of n is determined using the length function and the length function returns the number of elements in the row array x and in this case x has five elements 0 2 4 6 and 8.

and for each pass of our loop we will evaluate the following statement
y= x2
Looking at the code can be a bit confusing.

So let’s take a look at this flow chart which can help us visualize each loop pass. First we start by initializing our row array x and we determine the number of elements in the array x using the length function and there are five elements. Now let’s begin so our loop variable i which is also serving as our array index has a starting value of 1and a final value of n. 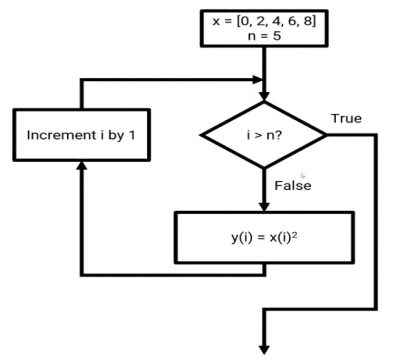 Where“n” has a value of 5 corresponding to the number of elements in x. Now our current value for i is not greater than our final value and we evaluate our statement.

Now let’s jump over to MATLAB and implement this problem now that we are in MATLAB the first thing we are going to do is to start a new script file and now that the editor is open we can begin our program our first step is going to be to initialize our row array x.

we use square brackets to enter in an array in MATLAB now we are going to enter our elements and we separate each column in this row array by a comma or a space again my personal preferenceis to use a comma to ensure readability and prevent any accidental errors I will end with another square bracket and then I am going to add asemi-colon to suppress this line.

So that is not output to the command window. Next I am going to set up our variable n and the purpose of this variable is to count the number of elements in the array x and we do that through the use of th elength function. So we do length of (x) and this will give us a value for n of five because there are five elements in the array. 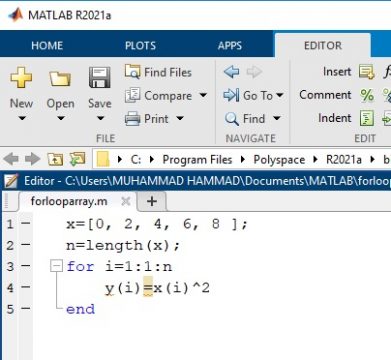 Now inside the command window if i scroll up i see the value of y for each loop pass so we have our first loop pass, our second loop pass, third, fourth, and our fifth and final loop pass and notice here that we have a value of y that corresponds to each element inside of our arrayx. 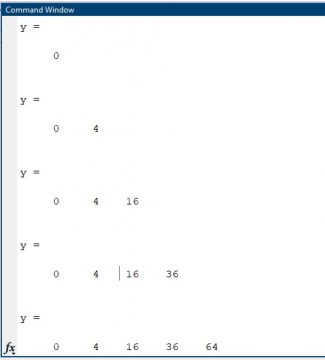