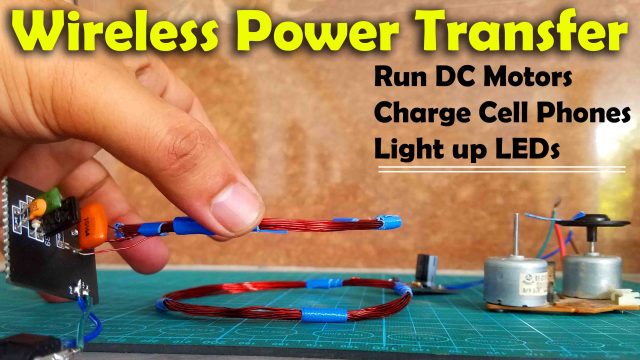 In this tutorial, you will learn how to make a wireless power transfer system using basic electronics components. With this wireless power transfer system, we will not only power up some LEDs at shorter and longer distance, but we will also power up some DC motors without any physical wiring between the transmitter and receiver side, so, this means if you can wirelessly power up these dc motors then you can also charge your cell phones wirelessly. I will also explain different factors which greatly affects the Power transmission range and you will practically see everything in action. Without any further delay, let’s get started!!!

What is Wireless Power Transfer?

Wireless power transfer (WPT) or wireless energy transmission is the transmission of electrical power from a power source to a consuming device without using solid wires or conductors. It is a generic term that refers to a number of different power transmission technologies that use time-varying electromagnetic fields. Wireless transmission is useful to power electrical devices in cases where interconnecting wires are inconvenient, hazardous, or are not possible. In wireless power transfer, a transmitter device connected to a power source, such as the mains power line, transmits power by electromagnetic fields across an intervening space to one or more receiver devices, where it is converted back to electric power and utilized.

Wireless power techniques fall into two categories, non-radiative and radiative. In near-field or non-radiative techniques, power is transferred over short distances by magnetic fields using inductive coupling between coils of wire or in a few devices by electric fields using capacitive coupling between electrodes. Applications of this type are electric toothbrush chargers, RFID tags, smartcards, and chargers for implantable medical devices like cardiac pacemakers, and inductive powering or charging of electric vehicles like trains or buses. A current focus is to develop wireless systems to charge mobile and handheld computing devices such as cellphones, digital music player and portable computers without being tethered to a wall plug. With the radiative or far-field techniques, also called power beaming, electrical energy is transmitted by beams of electromagnetic radiation, like microwaves or laser beams. These techniques can transport energy longer distances but must be aimed at the receiver. Proposed applications for this type are solar power satellites, and wireless powered drone aircraft. An important issue associated with all wireless power systems is limiting the exposure of people and other living things to potentially injurious electromagnetic fields (see Electromagnetic radiation and health).

“Wireless power transmission” is a collective term that refers to a number of different technologies for transmitting power by means of time-varying electromagnetic fields. The technologies, listed in the table below, differ in the distance over which they can transmit power efficiently, whether the transmitter must be aimed (directed) at the receiver, and in the type of electromagnetic energy they use: time varying electric fields, magnetic fields, radio waves, microwaves, or infrared or visible light waves.

In general a wireless power system consists of a “transmitter” device connected to a source of power such as mains power lines, which converts the power to a time-varying electromagnetic field, and one or more “receiver” devices which receive the power and convert it back to DC or AC electric power which is consumed by an electrical load. In the transmitter the input power is converted to an oscillating electromagnetic field by some type of “antenna” device. The word “antenna” is used loosely here; it may be a coil of wire which generates a magnetic field, a metal plate which generates an electric field, an antenna which radiates radio waves, or a laser which generates light. A similar antenna or coupling device in the receiver converts the oscillating fields to an electric current. An important parameter which determines the type of waves is the frequency f in hertz of the oscillations. The frequency determines the wavelength λ = c/f of the waves which carry the energy across the gap, where c is the velocity of light. 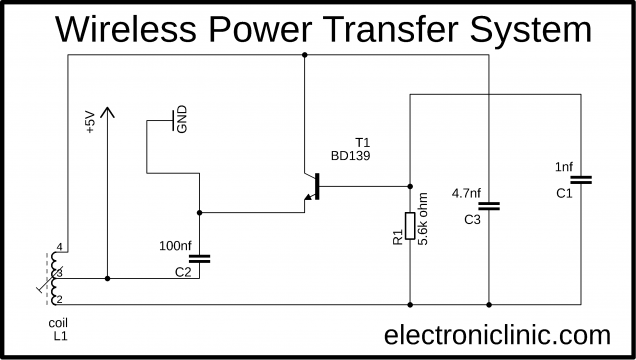 This is the transmitter side circuit diagram. While 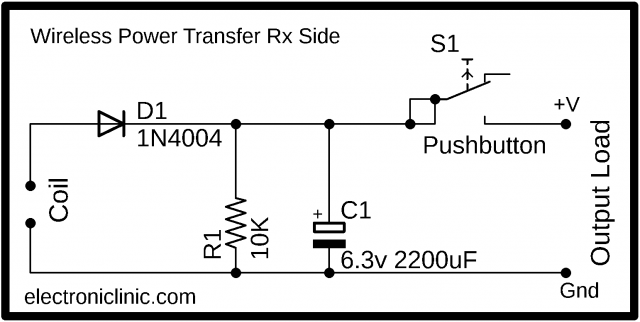 This is the receiver side circuit diagram used to power up small dc motors and to charge the cell phones. For powering up the LEDs we won’t need this circuit but a small resonant capacitor which I will explain in a minute. 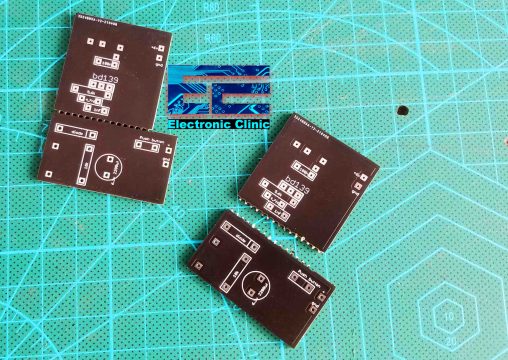 You can also build the same project on breadboard and you can also use a veroboard to solder all the components but for the beginners it’s a bit difficult because there are high chances of short circuits, so I decided to design my own PCBs.

Our receiver and transmitter circuits are ready. First we will start with the Transmitter side, we will make a coil for this and then we will test this with different LEDs to explain things that I believe you should know.

Select a pipe or any other object with 4 inches diameter and you will need 22SWG laminated copper wire. 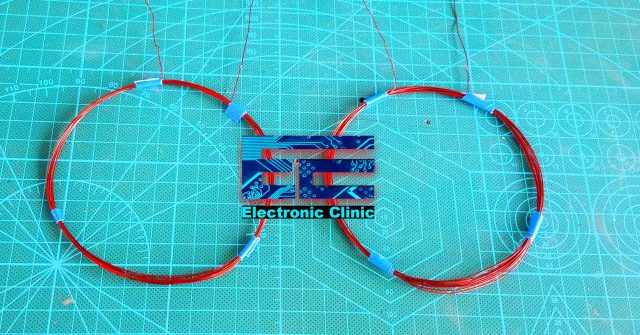 My two copper coils are ready each one having 10 turns. Next, we are going to connect these two coils, pay a very close attention because this is really an important step. I explained this in the video. Link to the Video tutorial is given at the end of this article. 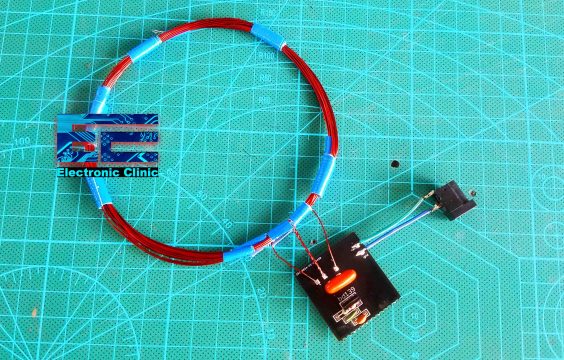 Your coil should look something like this, before soldering the coil don’t forget to remove the insulation from the copper wires. Our transmitter side is ready, the coil has been soldered and now it’s ready for its initial testing. 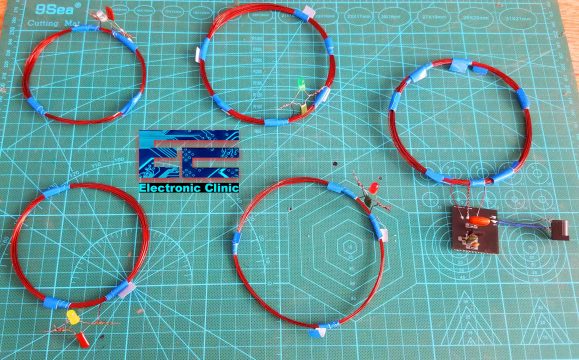 Now to explain some of the basic things, I am going to test this transmitter side circuit which can be powered up using 5 to 6 volts with these different coils to which LEDs and resonant capacitors are connected.

There is also another factor that greatly affects the maximum wireless power transfer range and that is the voltage dropped by the load connected with the secondary side. So, I say the lower is the voltage drop the better it is. So, let’s go ahead and start the testing and then I will explain things accordingly. 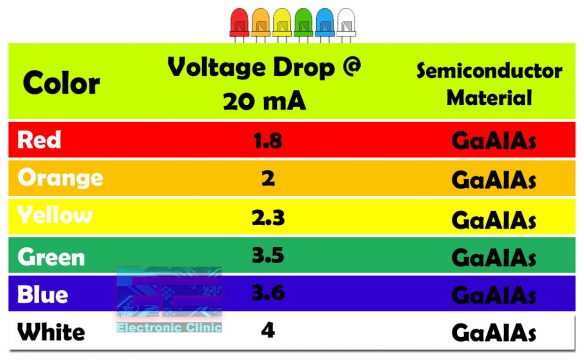 All these different color LEDs have different voltage drops as you can see in the LEDs voltage drop table. Red LED has the lowest voltage drop of 1.8 volts. So, technically the Red LED should light up at a greater distance, but the voltage drop is not the only factor that affects the transmission range. For the demonstration purposes I will only use the Red, Yellow, and Green color LEDs. 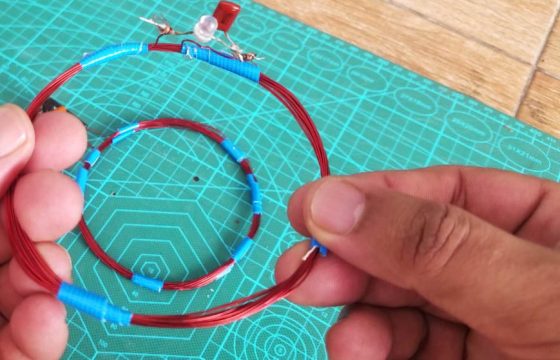 So, first let’s start with this crystal type yellow color LED to which a 15nF capacitor is connected. The coil diameter is 3 inches and has 15 turns. This crystal type LED is quite different from the other 3 LEDs, but anyways, the range of this LED is quite impressive and lights up very brightly, you can try different diameter coils, different value capacitors, and of course you can use a smaller LED this will further increase the range. For the practical demonstration watch video given at the end of this article. 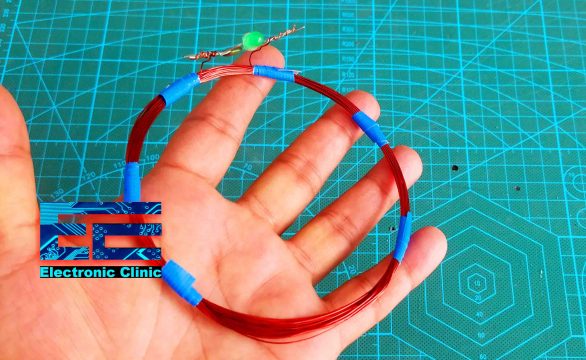 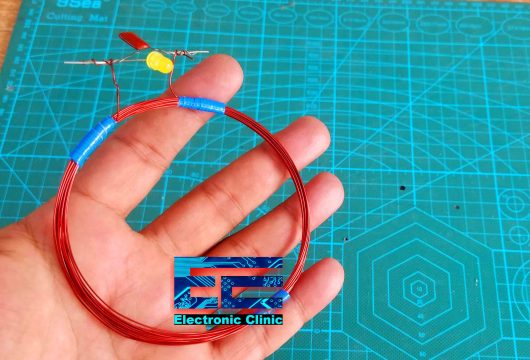 Now, let’s check this Yellow color LED to which a 10nF capacitor is connected. The coil diameter is 3inches and has 20 turns. This is the normal type yellow color LED while the previous one was the crystal type LED. For the practical demonstration watch video given at the end of this article. 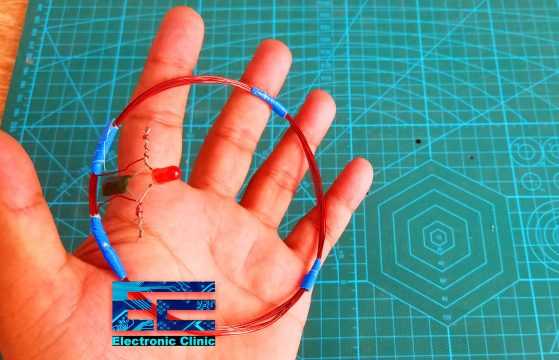 Now, let’s check this Red color LED to which a 27nF capacitor is connected. The coil diameter is 4inches and has 10 turns. 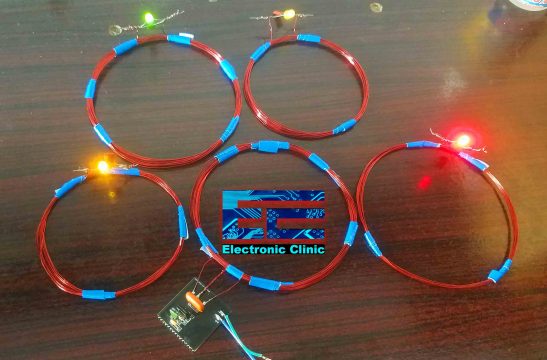 I was able to power up all these LEDs wirelessly, for practical demonstration watch video tutorial.

You might have noticed one thing, the Red led is much brighter as compared to the other LEDs. You know why? It’s just because of the voltage drop. As you can see in the table given above the voltage needed to power up the Red color LED is lower than all the other color LEDs. We may light up this LED at a longer distance from the transmitter by simply increasing the number of turns to 25 and then attaching a 103k or 10nF capacitor will do the job.

Although the Red led has the lowest voltage drop which is 1.8 volts and the Green LED has the voltage drop around 3.5 volts, but still the green LED has the maximum range. This is due to the increased number of the coil turns and the capacitor value which is 10nF. While the capacitor connected with the Red led is 2A273J or 27nF and the number of coil turns are 10. So, this is the reason we get maximum range with the Green LED. So, the Green LED is the winner. One more thing that I would like to mention is that, you can use foil and ceramic type capacitors. Enough with the LEDs testing now it’s time to check our wireless power transfer system with some DC motors. 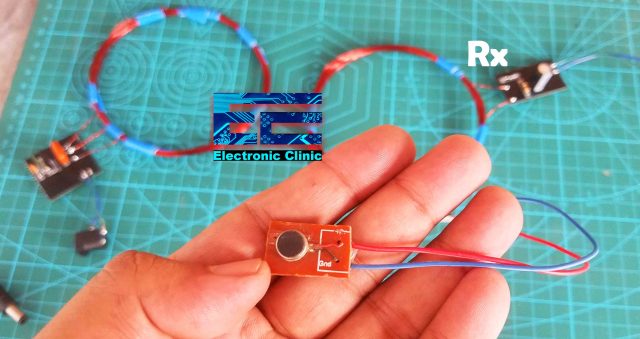 I also powered up this small Brushed DC motor which is normally used in small RC planes and quadcopters. One more thing that I found out while performing the tests is that when you place a copper sheet between the two coils then the wireless power transfer system fails. 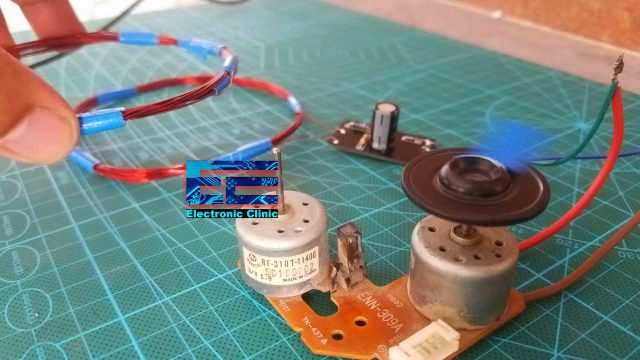 This is simply amazing, we can wirelessly power up LEDs and small DC motors. With this whole setup you can also wirelessly charge your cell phones. You can further improve the overall performance by simply changing the capacitor values, coil sizes, and turns. You can further reduce the size by using SMD type electronics components.