There are couple of different categories of topologies which are wired and wireless. The most common topology is wired topologies.

The most common wired topology is star topology. In star topology all the computers are connected to a central wiring point such as hub or a switch with a point to point connection. In this computer there is dedicated connection to all computers and has very fast performance. We can easily upgrade the hub which is the central point all the data will be pass from the hub before continuing to its destination. When the information will be sent from the computer to the hub and from where all the data will be transfer to other computers. While if the centralized device is switch when the message will be sent to the switch from where depending on the address the data will be sent to the destination. Multiple communications is possible in the star topology. Star topology is mostly used in client server networks. 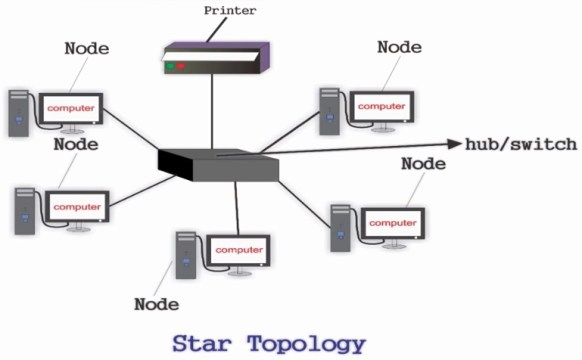 Advantage of the Star topology:

Disadvantage of the Star topology:

However the disadvantage of the star topology is that the whole topology depends upon on the hub. When the central hub or switch fails then then all the computers on the central point will be affected. This is called a single point of the failure. If this happens the entire network will goes down.

It requires large length of cable to connect the computer. It is more expensive.

The ring topology is a type of network configuration where each computer is connected to other computer in the shape of the loop or ring. So every computer on this ring has exactly two neighbours for communication purposes. In the ring topology the message will pass from one computer to other computer to reach the final destination. This kind of topology very old and is rarely used today. It is also called dual ring topology and it is unaffected by the high traffic. Data travels in one direction through all the intermediate hosts. To connect one more host in the existing structure the administrator may need only one more extra cable. Failure of any hosts results of the whole ring. We can send the data in either clockwise direction or anticlockwise direction due to which the packet data collision will be reduced. The data transmission delay is directly proportional to the number of the nodes in the network which means that when the data nodes are more the data transmission will be delay. 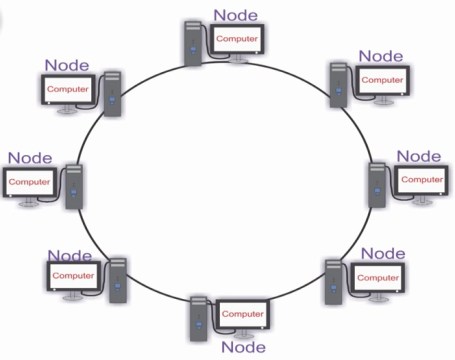 Advantage of the ring topology:

Disadvantage of the ring topology:

The bus topology is very old technology and like the ring topology it not used that much. This is the kind of the network setup where each of the computer and the network devices are connected to a single cable which coaxial cable and at the end of the wire we connect grounded terminals which is known as terminator so that the data communication cannot be echoed by the message. The terminator will ground the message. The terminator stop signals after reaching end wire. A lot of computer is connected with main cable or hub. The data will flow in one direction. By adding more computers will reduce the access speed of the network. The devices will shares responsibility for getting data from one point to another point. Each computer communicates to other computer on the network independently this is referred to peer to peer network system. Because each computer communicating with other computer independently. The computer connecting to this cable using special connectors called BNC which is also known as T connectors.

Advantages of the bus topology:

Disadvantage of the bus topology:

In order for this setup to remain operational there must not be any open connections, including the ends that attach to the computer. So if the computer is removed or if the terminator is lose or missing then the cable would be open and the data would bounce back and this bounce is known as signal reflection. The data will be disrupted during signal reflection. During transmission only one message or data can be transmitted through the bus topology. So if we want to send data we will first see whether the network is free or not. Otherwise the sender will wait until the network is free.

In a mesh topology each computer on the network is connected to every other computer on the network. In this topology it has  channels for n devices. There are two ways for data transferring one is routing in which the computer or hub all already know and have an algorithm which finds a best and short way to send data. Another method is flooding the data is flooded to all the nodes. This topology is robust and is fully connected and secure. 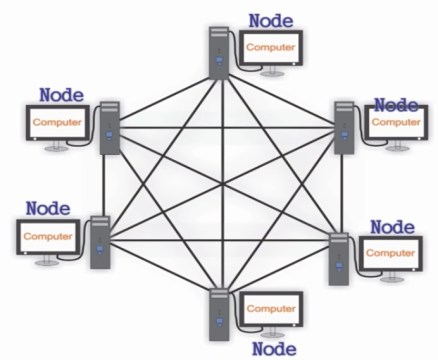 So by having so many connections it handles failure very well. In this illustration there are 4 computers with 3 connections on each computer which makes a total 12 connections for this network. The advantage of the mesh topology is that it creates a high redundancy level. Because if one or more connections fail the computer would be still be able to communicate with each other but because of the amount of the cabling and network cards that have to be used, mesh topologies can be expensive so they are rarely used on local area network or LAN. They are mainly used in wide area network like the internet. In fact the internet is good example of a mesh topology because the internet is made up of numerous routers all over the world that are connected to each other to route data to their intended destination. So even if a few routers goes down the data will get routed using a different path ultimately reach their destination. Internet is very redundant because it is using a mesh topology.

In this topology we have the main bus and hubs to which computers are connected in star formation such type of topology is known as tree topology. As this is the combination of two topologies which are bus and star topology. Now that is used in WAN which means wide area network. We can easily expend the nodes in it which means we can easily connect a lot of devices and star networks to it. The maintenance of this topology is easy but it is also hub dependent that means if the main bus fails then all the network will fail. 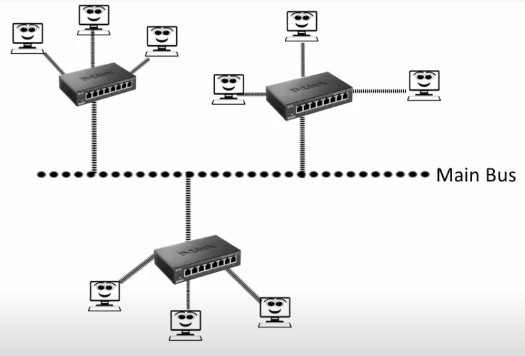 If one of the star topology will damage it will not affect the network.

It consists of the main bus with which the star topology and ring topology are connected with the central hub. When more than two types of topologies are combined then this type of topology is known as hybrid topology. It is used to handle larger volume. In this type of the topology if any of the computers fails it is easily detected and removed. It has improved network performance but on the negative side it is very expensive. It requires MSAU which means multi station access unit which is used to bypass the faulty devices and has complex design. 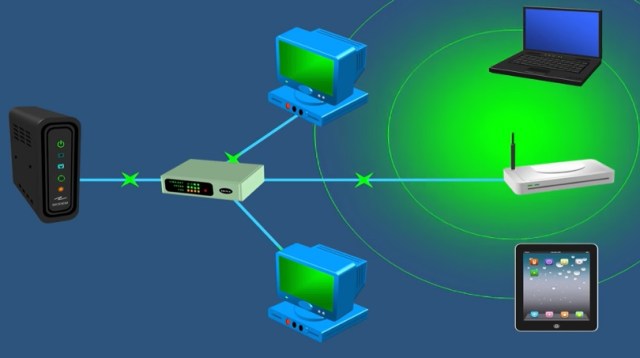 Ad hoc is very simple wireless topology. It is simple because it does not rely on any infrastructure such as cables, routers, servers or wireless access point. All the devices in Ad hoc network wirelessly connect to other devices in a simple peer to peer network. They directly connect to each other without using a centralized device such as a Wi-Fi router or access point and because they directly access each other without a server or router in between each device is responsible for its own security and permission. Ad hoc are useful for setting up quick wireless network on the fly where the device can share the data without the need of an existing wireless network. 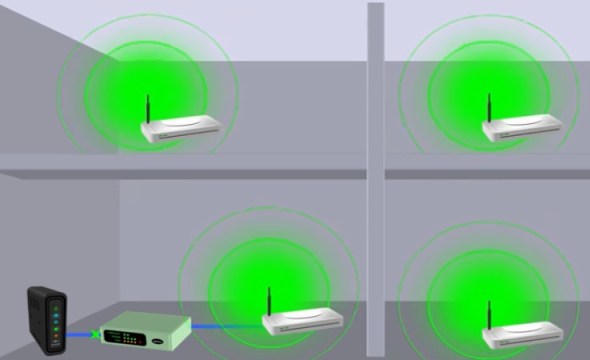