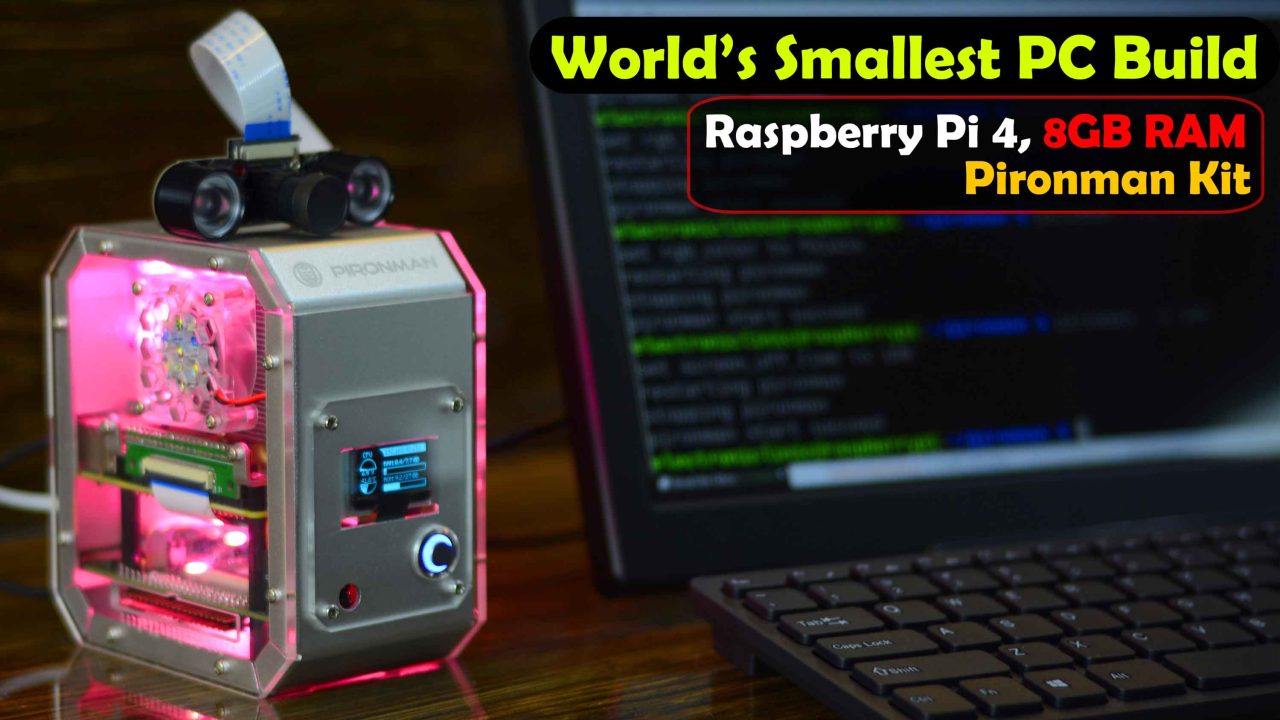 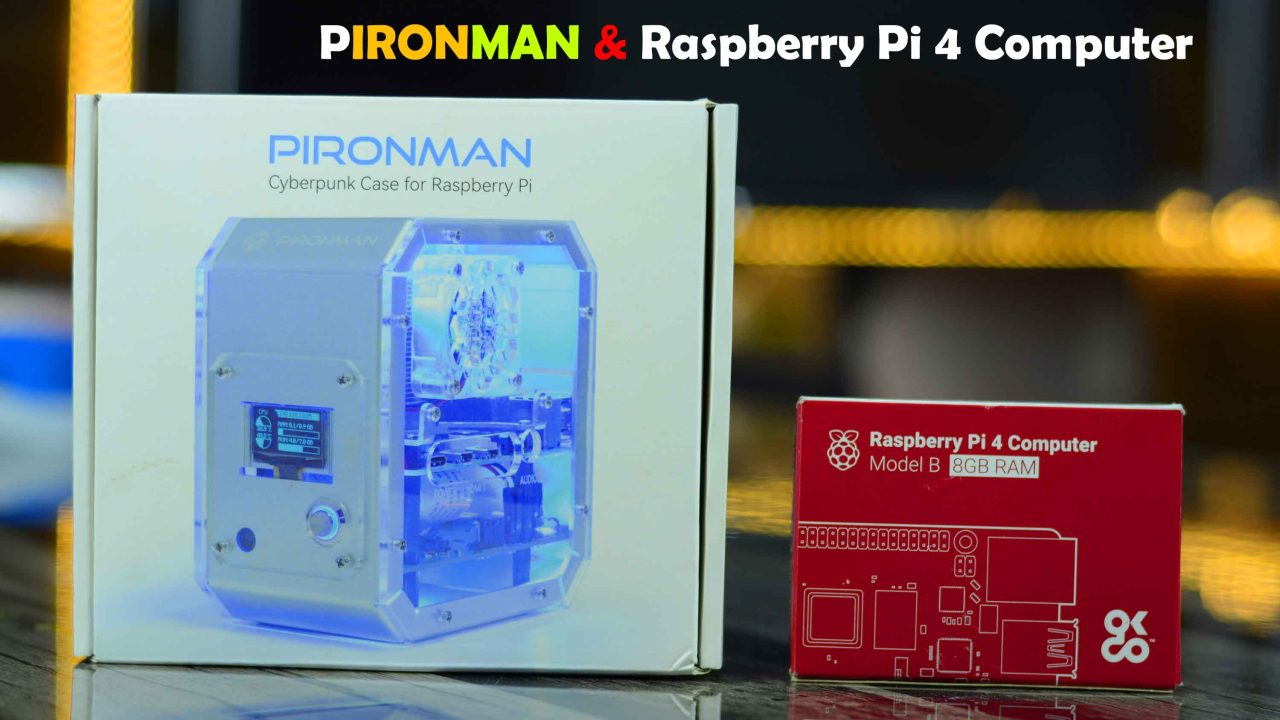 I will put this Raspberry Pi 4 Computer into this Pironman Cyberpunk Case. This is SunFounder’s customized Mini PC Kit for Raspberry Pi. 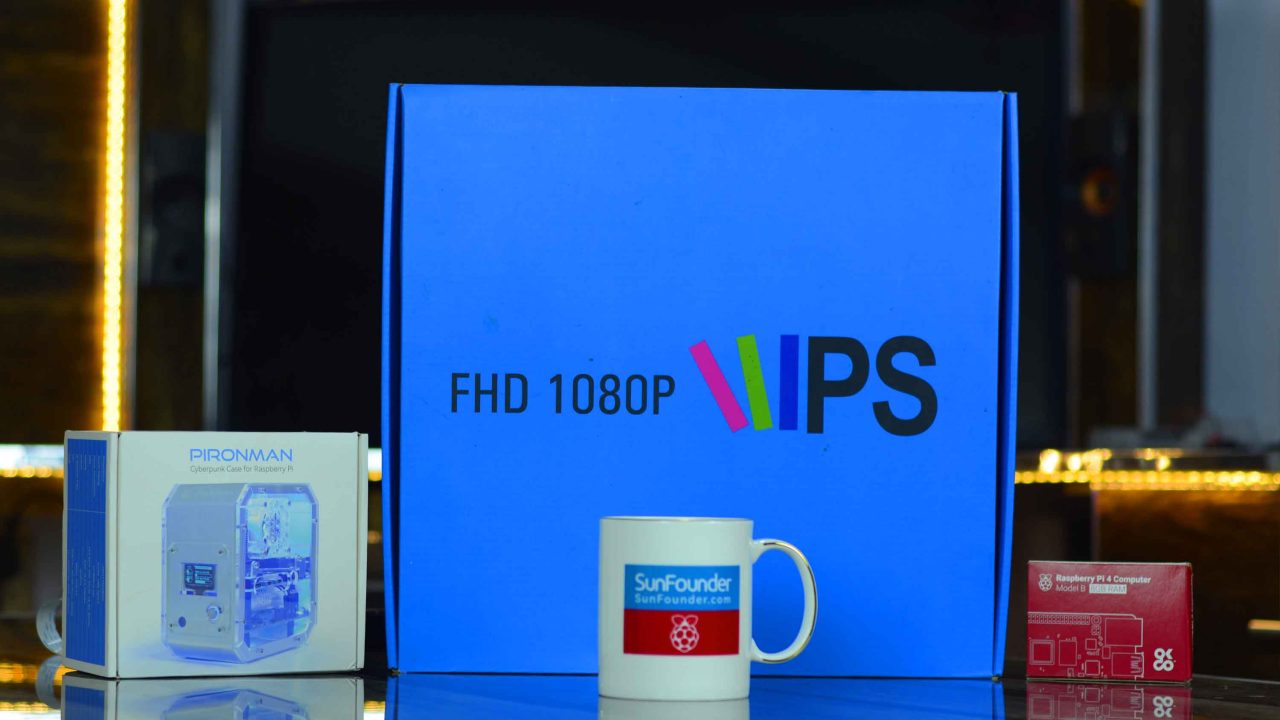 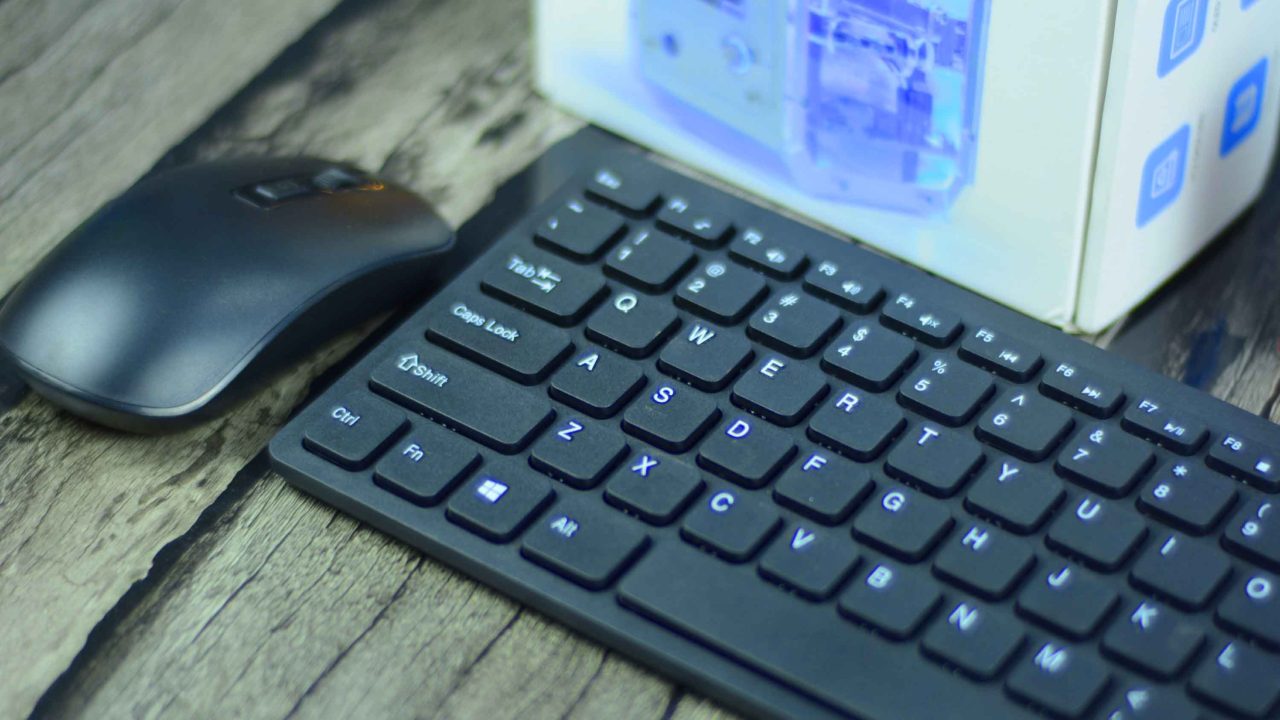 I am also very thankful to SunFounder for sending me this wireless keyboard and mouse. Anyway, let’s start with the Pironman Cyberpunk Case. 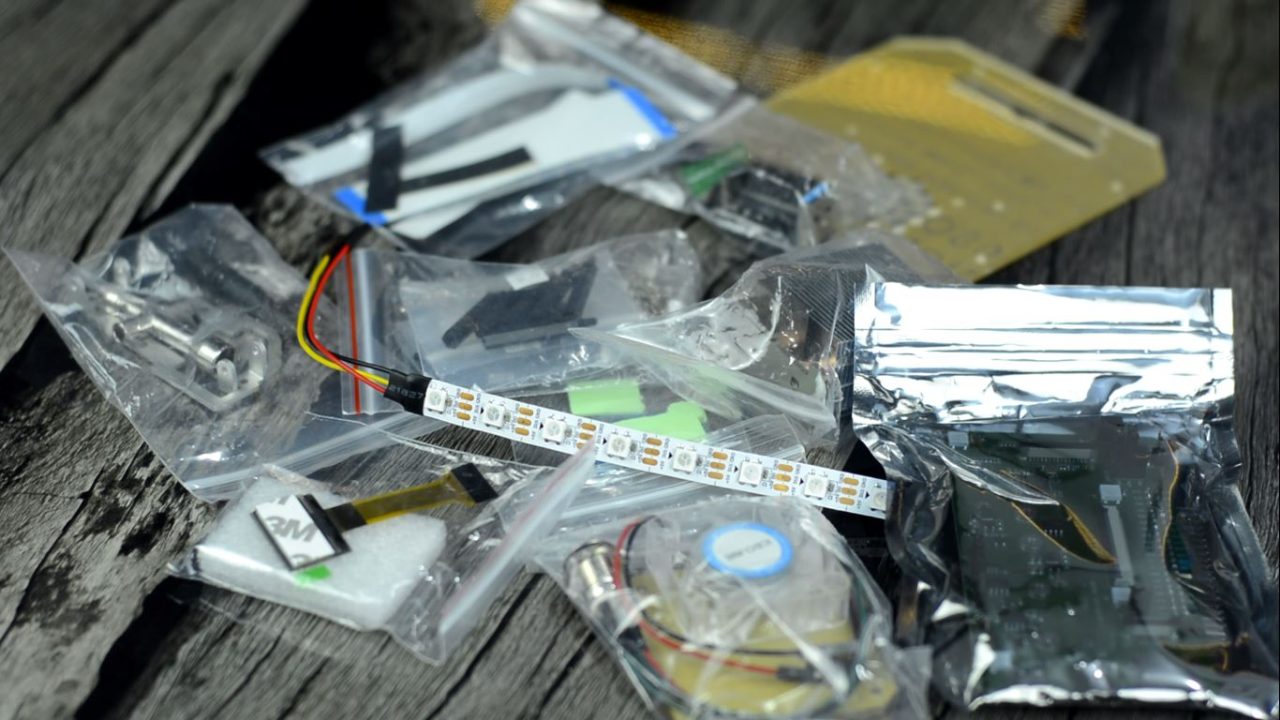 Inside this box, you will find the User Manual, the casing, and lots of other scary things.

At first, I was really shocked and had no idea how to assemble all the parts. But thanks to the SunFounder for writing such a detailed User Manual. 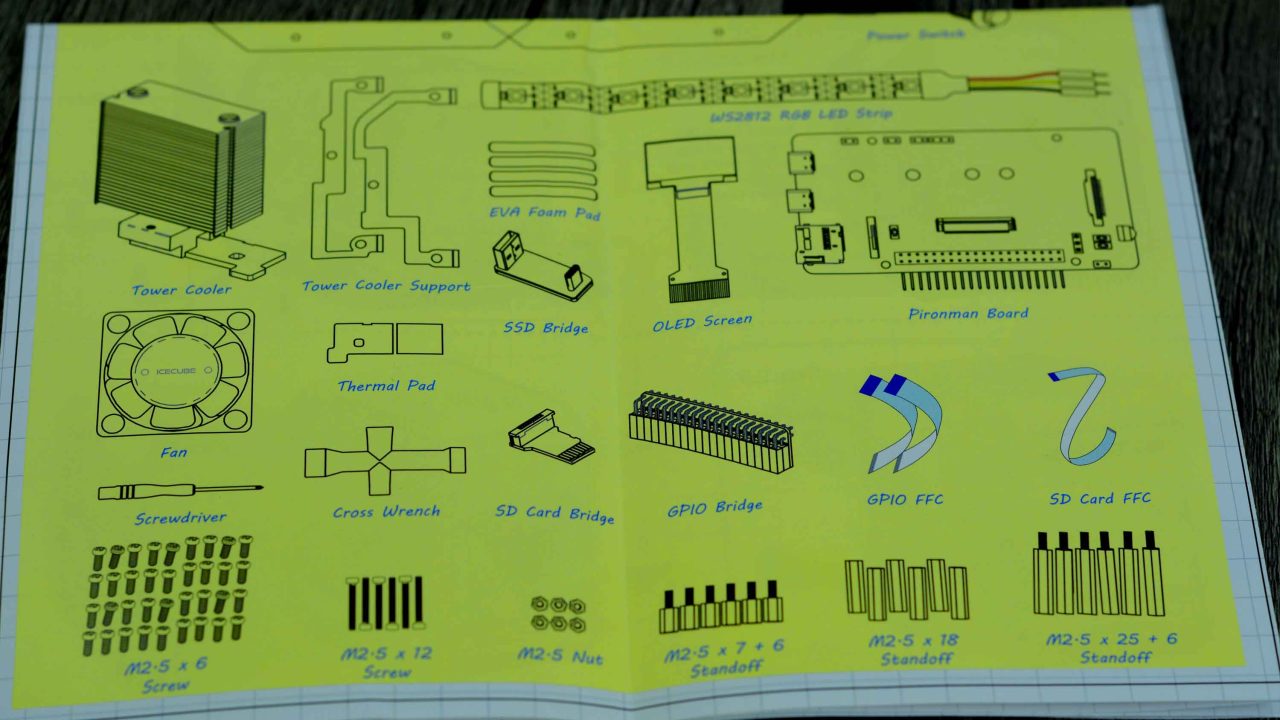 All the parts are clearly labeled and I am really impressed the way they have explained step by step the entire assembling process. 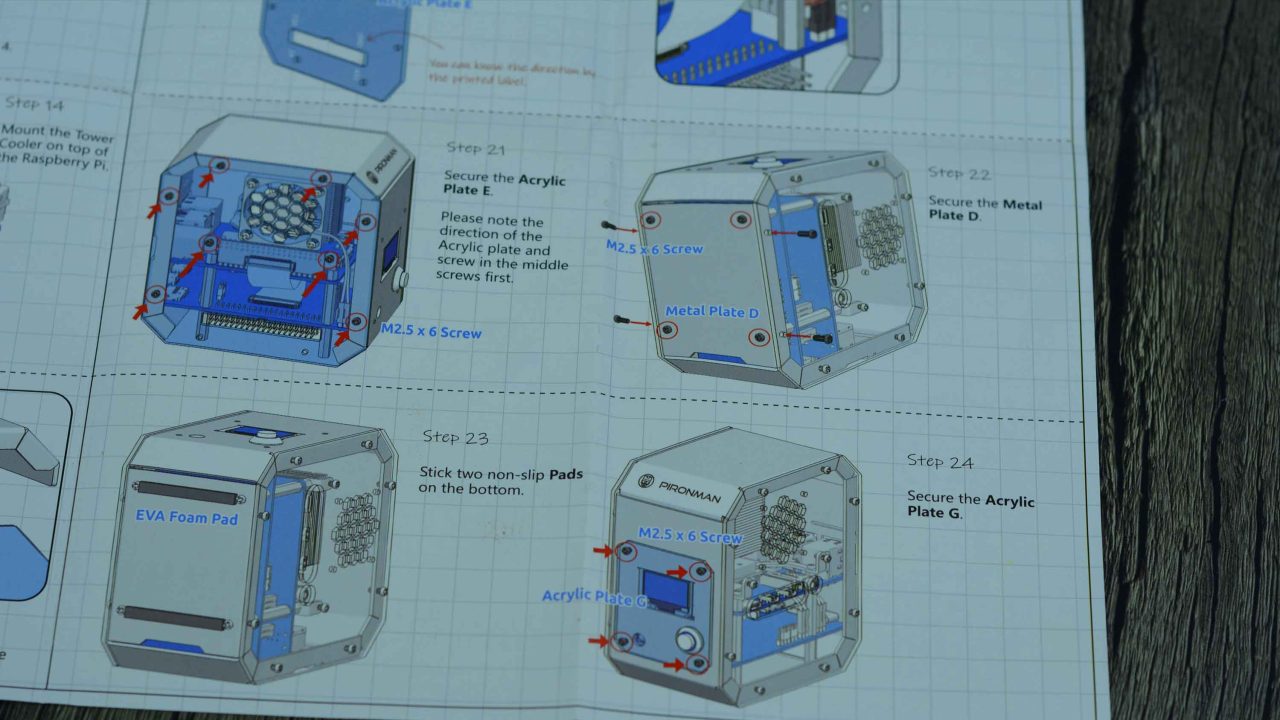 With the help of these 3D images and written instructions; I am sure anyone can do the assembling. I am doing it for the first time and if I can do it then it means you can also do it. There are a total of 24 steps and I think these are more than enough. 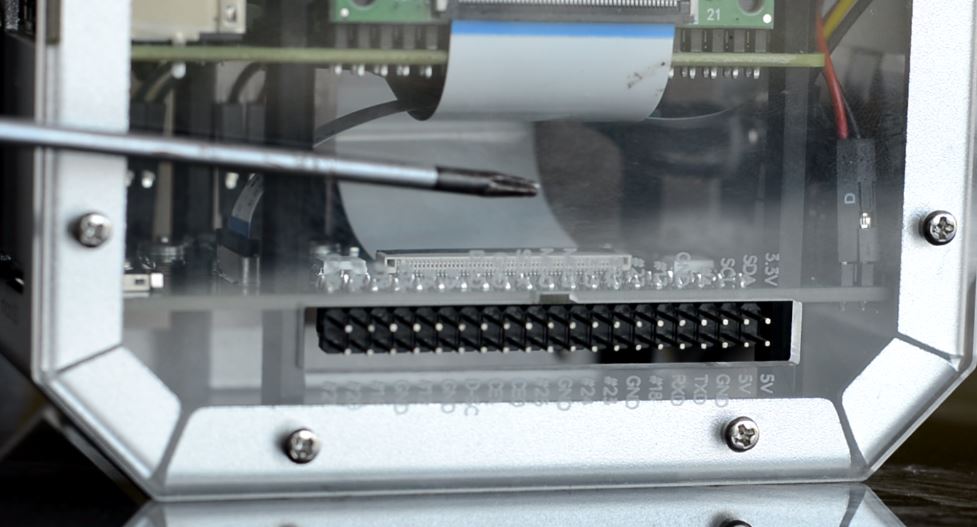 SunFounder has done a great job by printing all the pin numbers on the casing and now anyone can easily connect sensors and output devices. 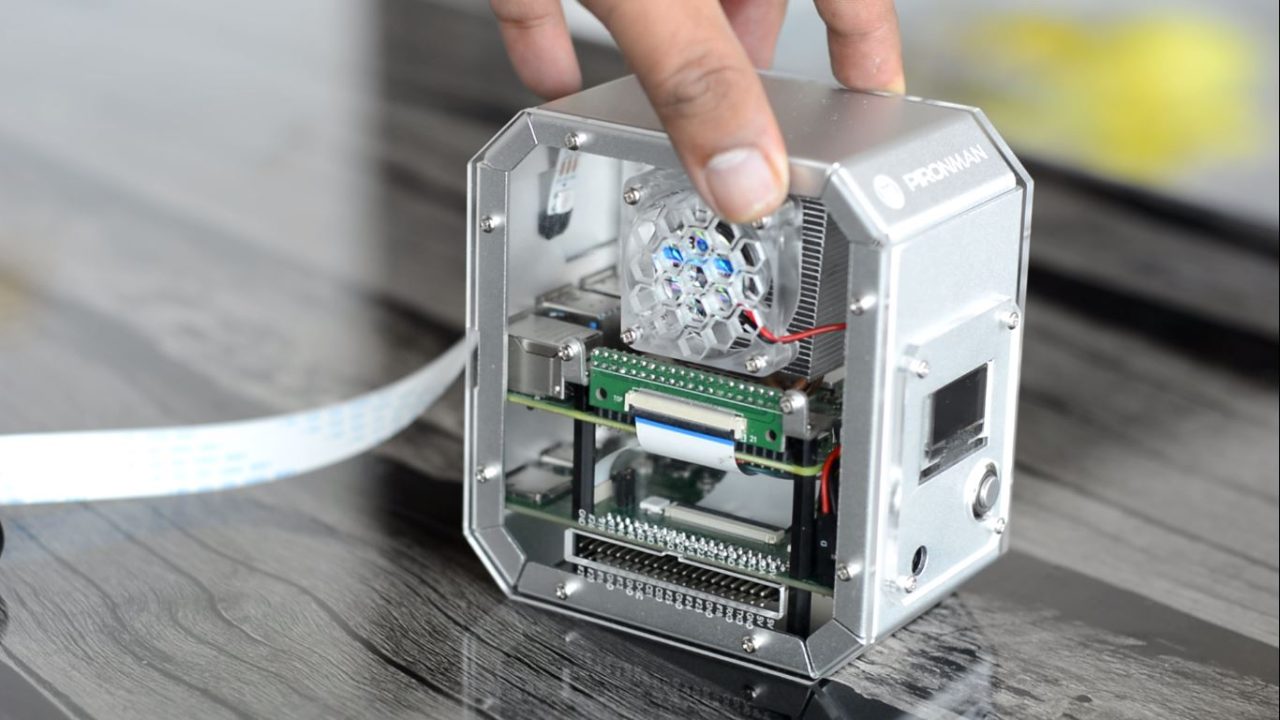 Note: if you still face any issues in assembling all the parts then you can watch my video tutorial available on my YouTube channel Electronic Clinic. 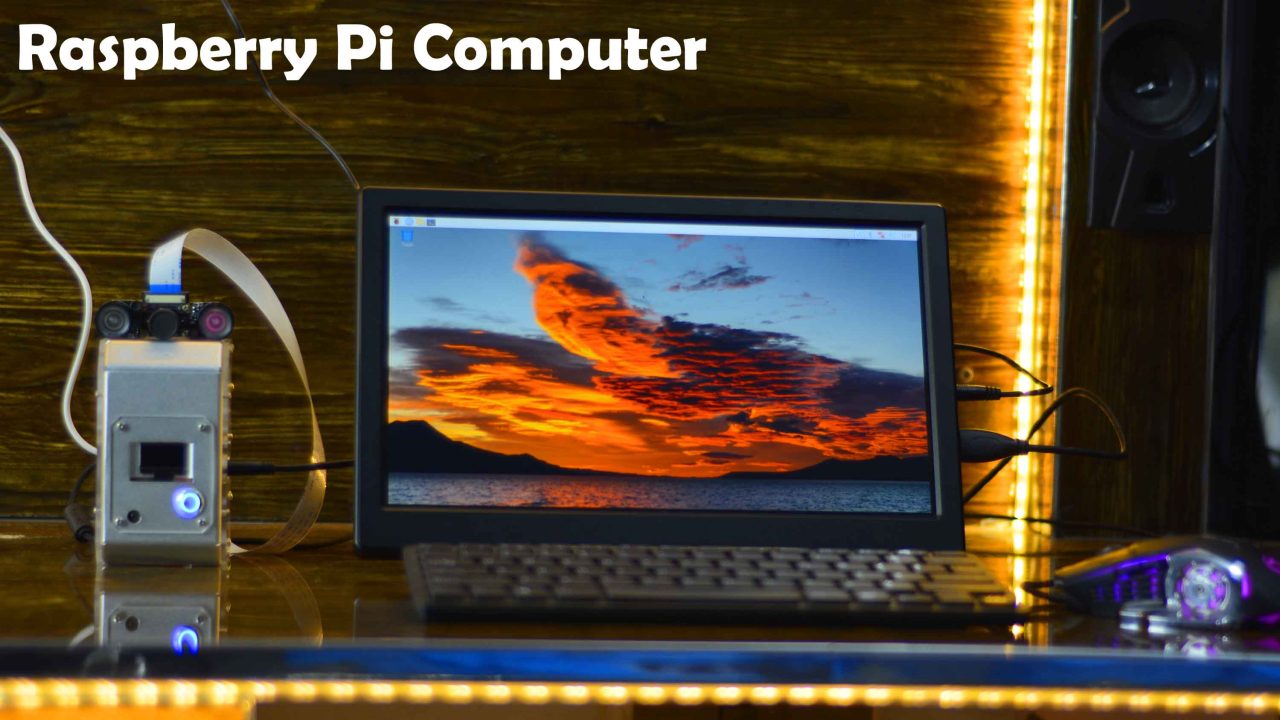 I have connected the SunFounder’s Full HD portable IPS monitor with the Raspberry Pi Computer using the Micro HDMI cable and I have also connected my Wireless Keyboard and Mouse. I am on my Raspberry Pi computer desktop and you can see the screen orientation is good. If incase on your side the screen orientation is different, then you can read the user guide to adjust the resolution for Raspberry Pi by modifying the config.txt file, they have already included all the commands, so you won’t face any issues. Anyway, for now everything is working just perfectly, the mouse and keyboard are working, I can scroll through the menus and categories, and everything is working the way it suppose to work.

You might have noticed, the Oled display is OFF, the WS2812 RGB LED strip is OFF, and the cooling fan is also OFF. To make all these things work, we will need to properly configure the Pironman Mini PC Kit. So let’s go ahead and do it.

Before, we start applying the commands, first you need to know about the Pironman main board. 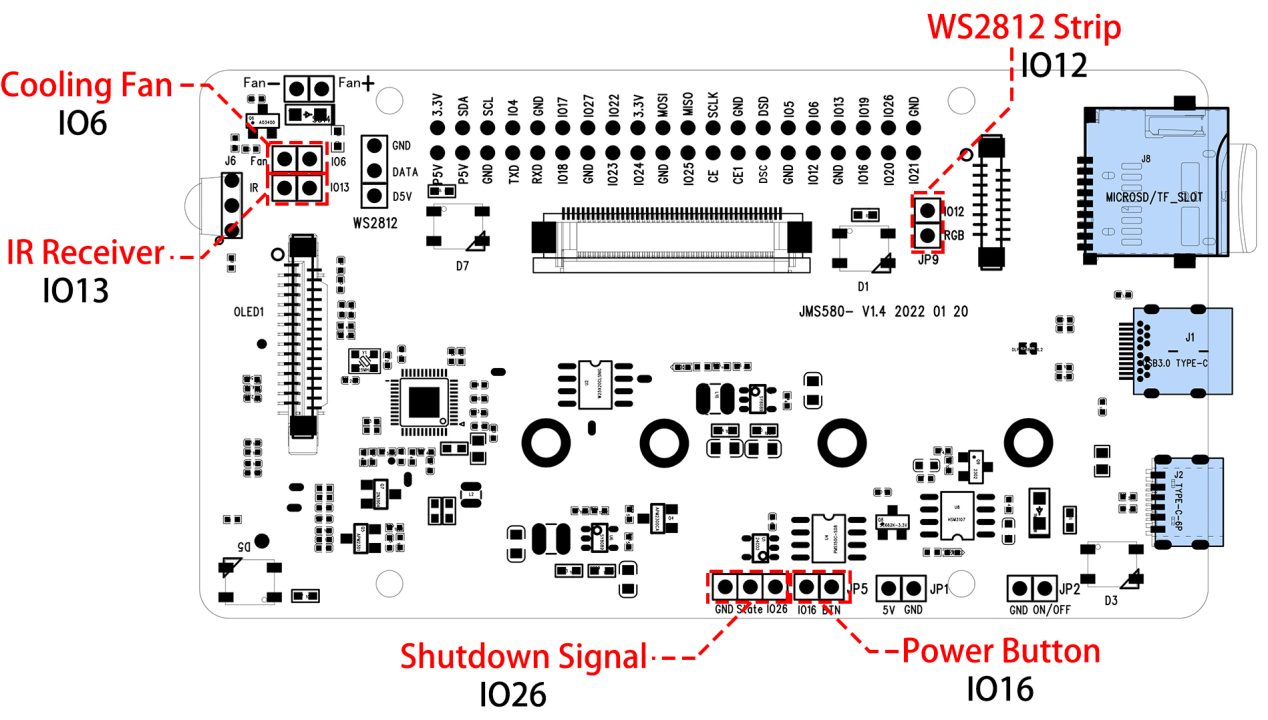 There are 5 jumper caps on the Main Board, each jumper cap corresponds to a function, if you do not need the function and want to use the pin elsewhere, you can unplug the jumper cap. The following is a detailed explanation of the functions of the five jumper caps.

When the Pironman suddenly loses power, the chip of the Main Board will record this state and will automatically power on the next time.

First, connect your Raspberry Pi to WiFi. Next, open the command terminal and paste the following command. 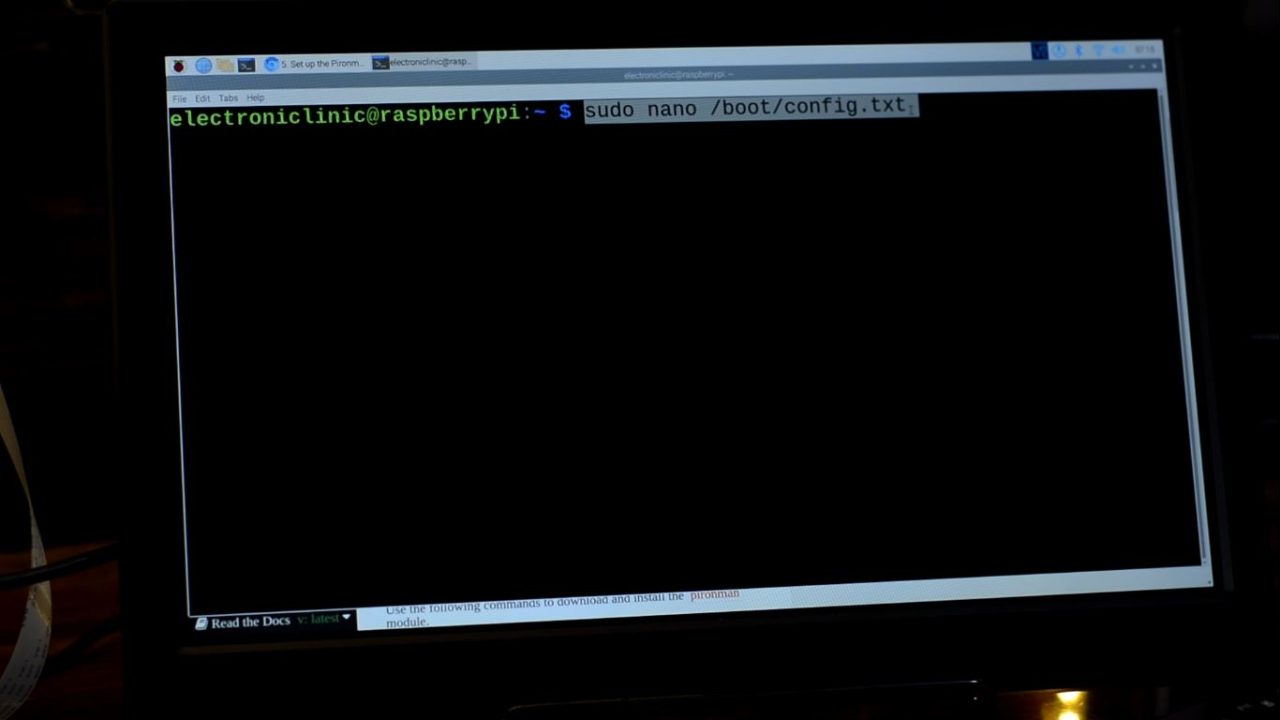 Use the following commands to download and install the pironman module.

After installation, the program will start automatically. Here are the basic configurations for Pironman. 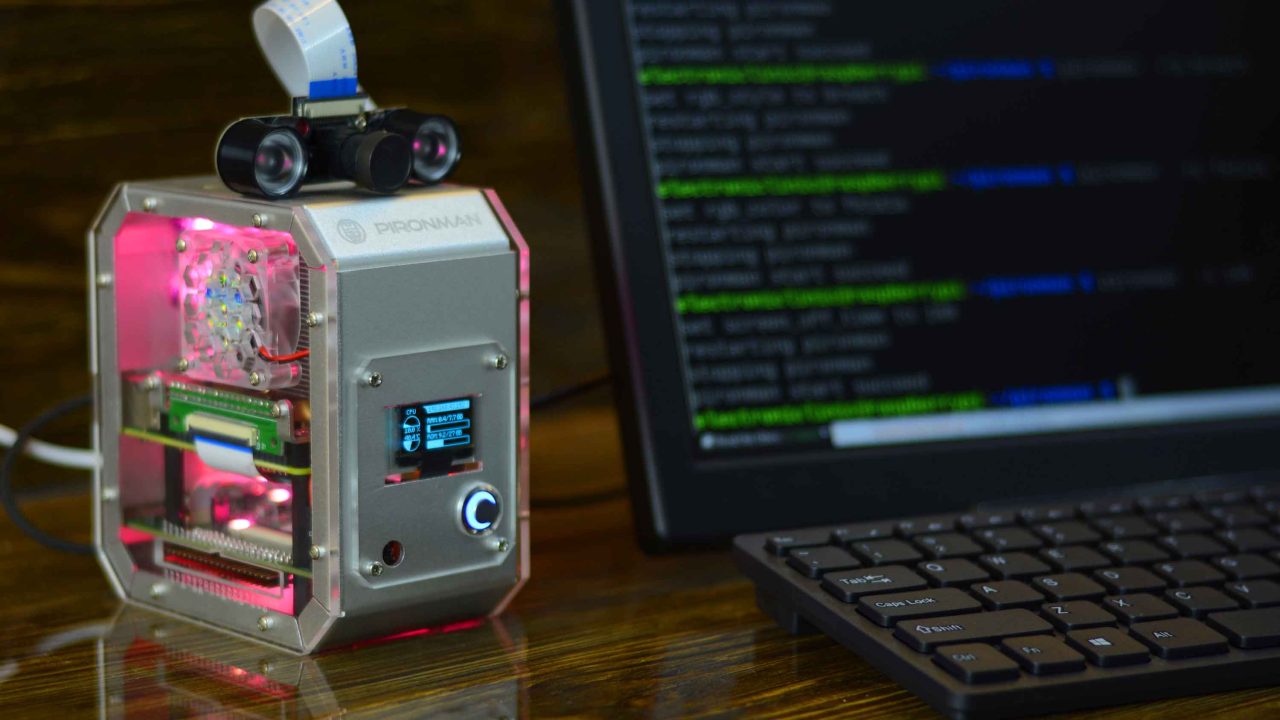 Anyway, if you want to check the default values, simply use this command. 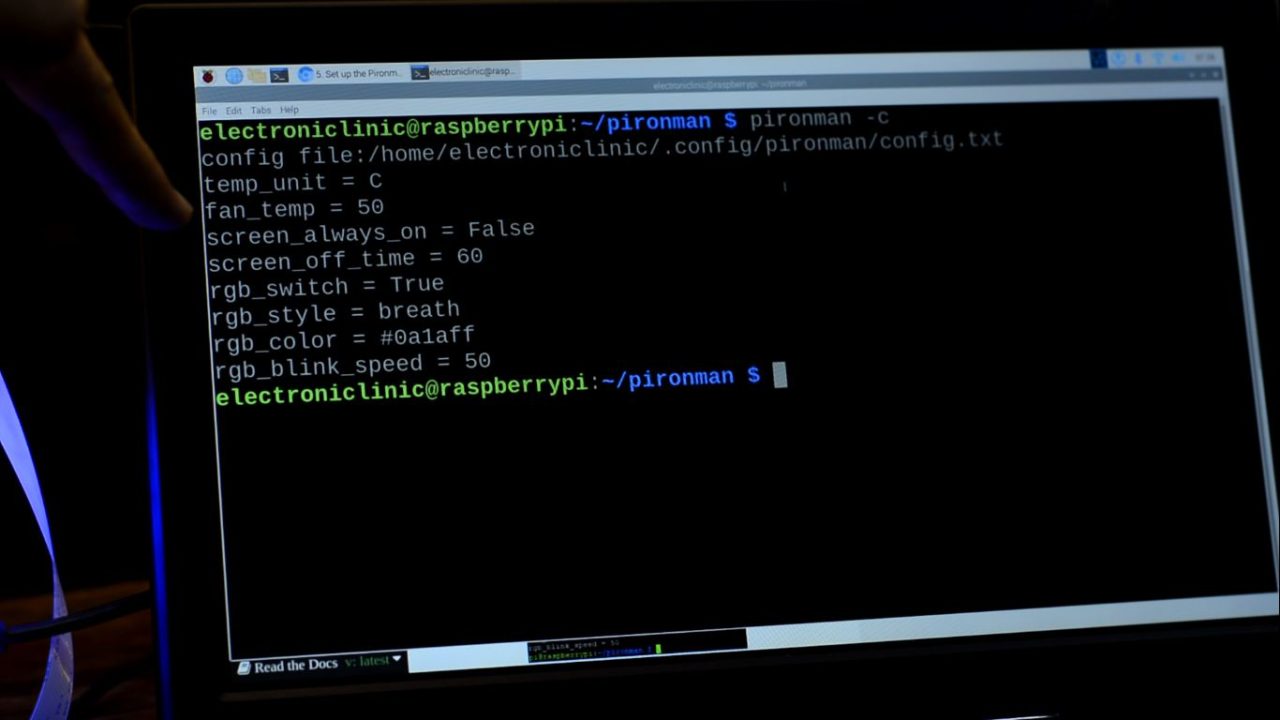 You can see the temperature unit is C. The Fan is turned ON when the temperature is equal to or greater than 50 Celsius. You can change this temperature limit. Similarly, you can modify the other configurations. Anyway, let’s start with the RGB LED strip.

The WS1812 RGB Strip is a light strip with 8 RGB LEDs that can be used to display Pironman’s status. You can use commands to make it turn on or off, or to modify its color (default is blue), display mode and change rate.

In the video, I practically demonstrated how to change the temperature from C to F. 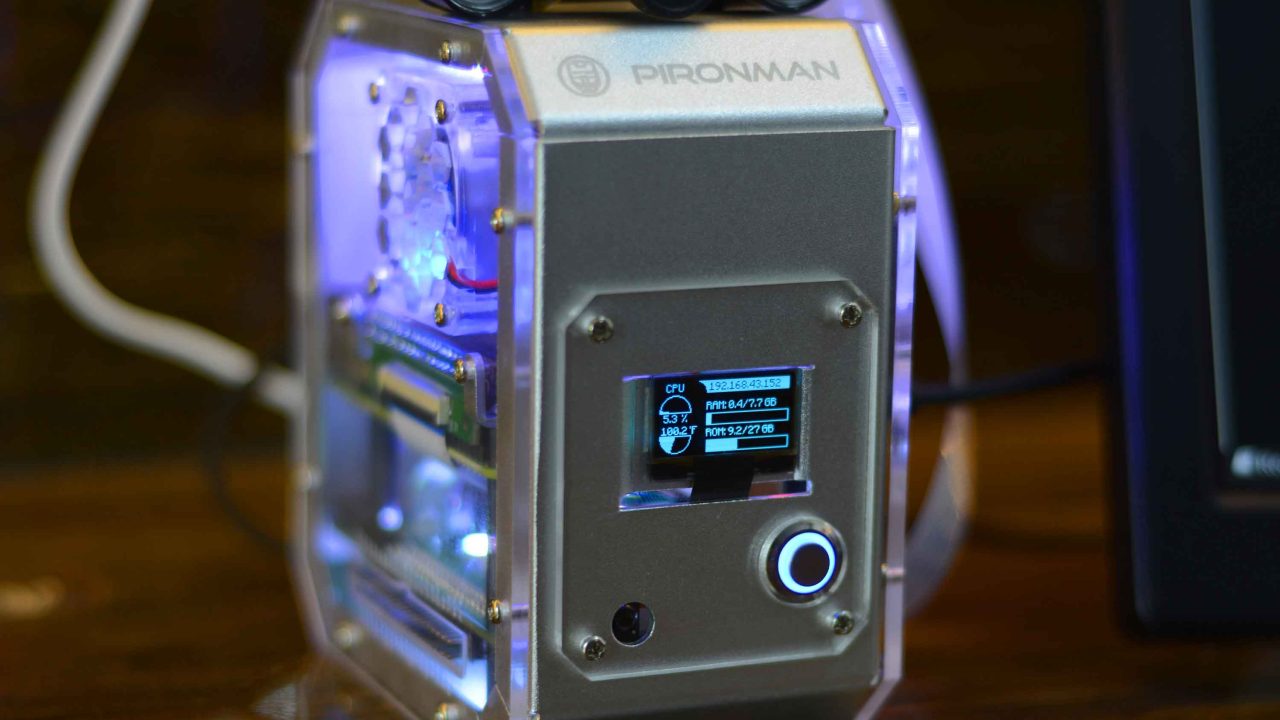 You can see the temperature is in Fahrenheit, don’t worry if the display is turned OFF, currently the display sleep time is only 1 minute, you can short press the power button to turn ON the display, to change this back into Celsius. Write the same command but this time type C instead of F.To change the temperature limit simply use the following command.

Instead of 40 you can write some other number. I have demonstrated this in the video.

After installation, the script will start automatically and the OLED screen will display the CPU, RAM and ROM Usage, CPU Temperature and IP Address of the Raspberry Pi.

In order to extend the life of OLED screen, OLED will turn off after 60 seconds by default, and will light up by pressing the power button shortly. You can enable/disable this feature with the following command.

Similarly, we can also control the Oled display, we can permanently turn it OFF or we can permanently turn it ON, and we can also change the sleep time. Anyway, so far, I all the changes I have made are temporary, If I restart the Raspberry Pi, all the changes will be gone and the Pironman will start with the default values. For the permanent changes, we will have to make changes in the code. Let’s say, you want to permanently change the Oled display sleep time from 1 second to 3 seconds.

For this browse to the Pironman folder > Open the main.py file. 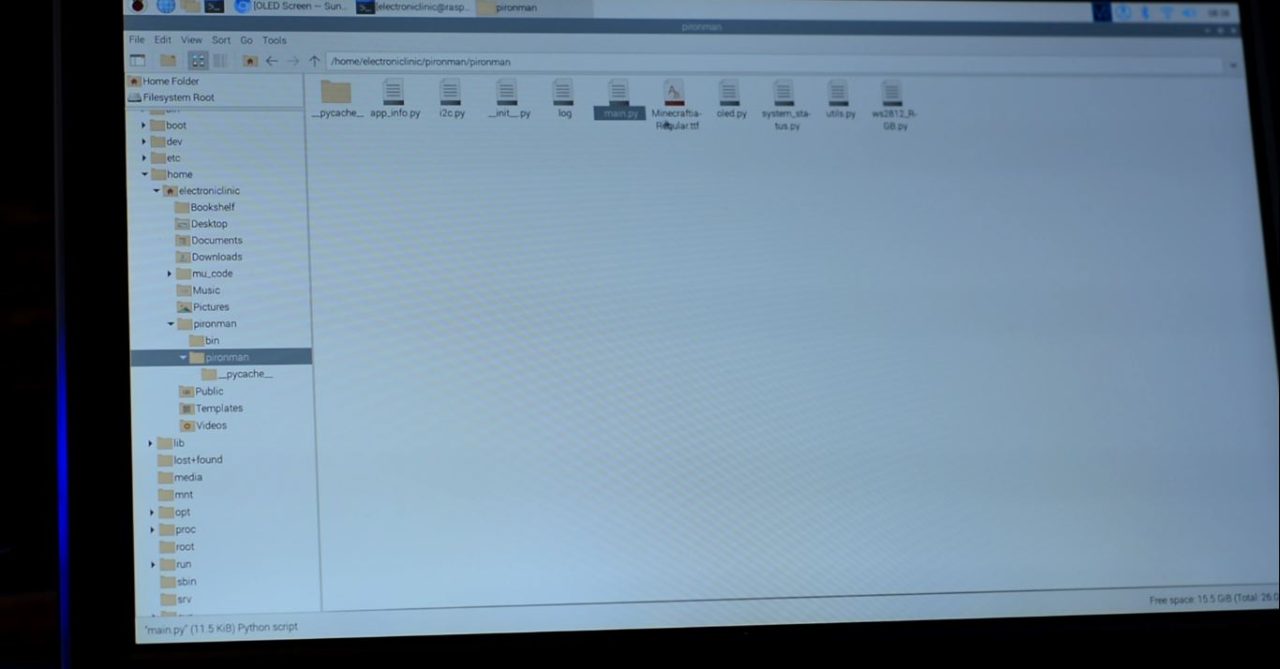 In this, file you can permanently change the values, for now,I want to change the sleep time. The screen_off_time default value was 60 seconds but I changed it to 180 seconds. The same way you can also change other parameters.

Save the file and that’s it. Now, if I short-press the power button, the Oled is going to turn ON for 3 minutes. I have pretty much explained all the basic things. If you want to know more about the Pironman Mini PC kit? 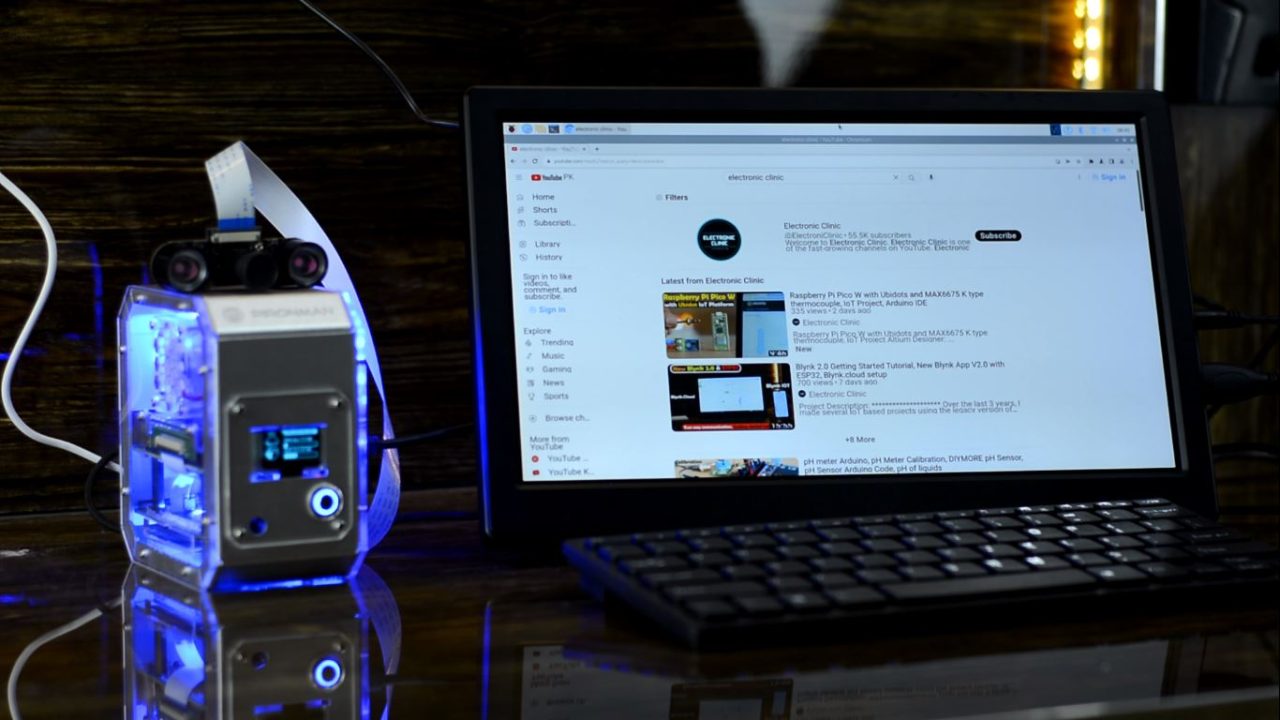 Anyway, my Raspberry Pi Mini PC is now ready. In my upcoming videos and articles, I will test it with some High-Quality HD videos, I will play some games. And I will also make so many amazing image processing-based projects using this Night vision camera, and I will also make sensors-based projects. So, consider subscribing if you don’t want to miss any of my upcoming tutorials. So, that’s all for now.