In this tutorial, we will write a very basic program to control the ESP32 onboard LED, and then we will modify the code to monitor an analog sensor, for demonstration purposes I have used a Potentiometer. The very best thing about the Arduino IoT Cloud is that when you make the dashboard on your PC the Android or IOS App is automatically generated and then you can monitor and control things from your cell phone. 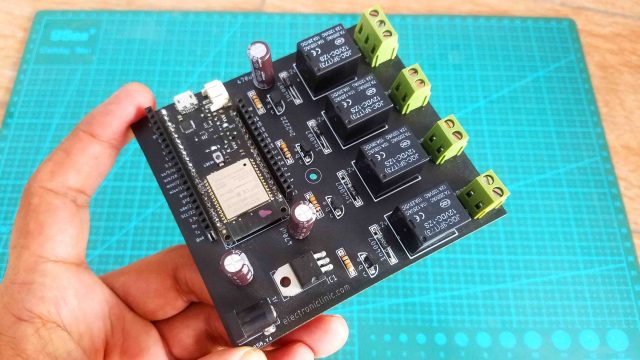 You can use the ESP32 WiFi + Bluetooth module alone or you can use my designed ESP32 development board. This is the same board I used in ESP32 Home automation, IoT Water level Monitoring system, and IoT pH meter.

Altium Designer is the world’s most trusted PCB design system. Altium Designer enables engineers to effortlessly connect with every facet of the electronics design process. Over 35 years of innovation and development focused on a truly unified design environment makes it the most widely used PCB design solution. With Altium Designer you can create PCB designs with an intuitive and powerful interface that connects you to every aspect of the electronics design process. Route it your way through any angle, tune for delay, Push, Slide, and Walkaround faster than ever. Interact and collaborate with mechanical designers like never before in a photo-realistic, 3D design environment. If you want to get started with the Altium designer, you can click on the get started.

Open Google on your internet browser and search for the Arduino IoT cloud. 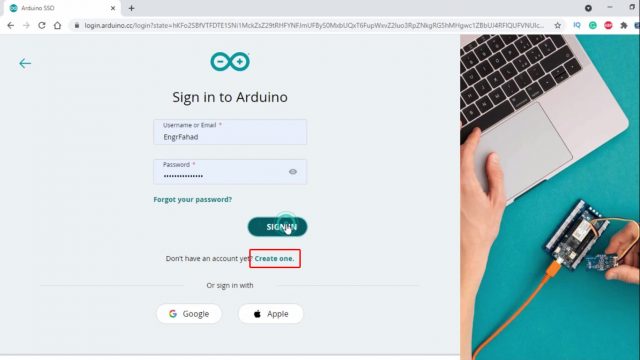 Click on the Create one if you are not registered, I have already created my account so I will simply enter my username and password and finally I will click on the SIGN IN button. After clicking on the Sign in button the page will be opened where the user is asked to activate the 2 step verification. 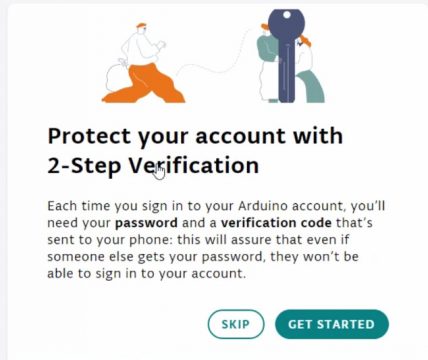 You can also protect your account with 2-step verification which is something you are already quite familiar with; I am going to skip this. 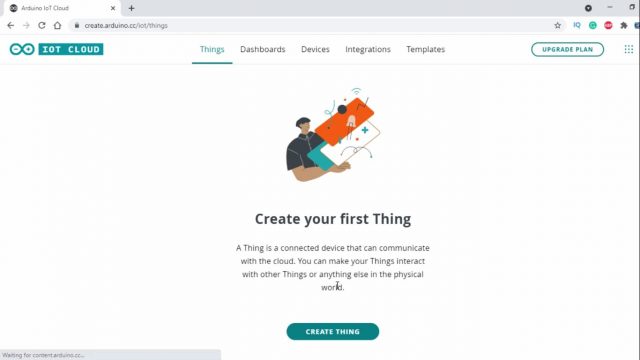 That’s it; our Arduino IoT cloud account is ready.

let’s take a look at different Plans before we create our first Thing. Click on the UPGRADE PLAN button on the top right side of the page. 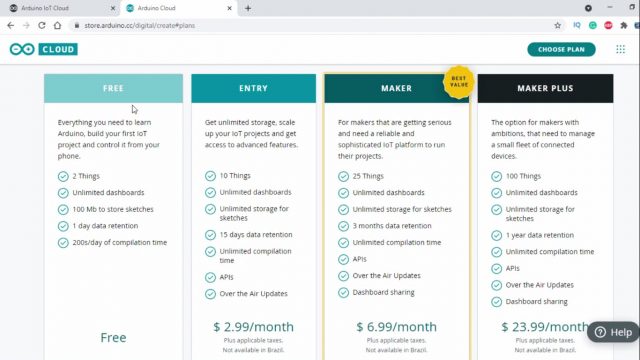 We have these 4 Monthly and Yearly Plans, As a beginner you can start with the FREE Plan and then if you like it you can try other PLANS. As a beginner free plan is not bad at all you can create 2 Things, Unlimited dashboards, 100 Mb to store sketches, 1 day data retention, and nice compilation time. I myself using the FREE plan, you can compare FREE Plan with the other three plans and select the one as per your requirement, enough with the talking now let’s go ahead and create our first Thing.

Go back to the previous page and click on the Create Thing button. 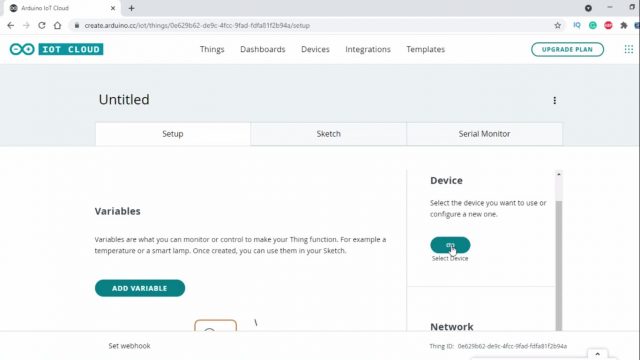 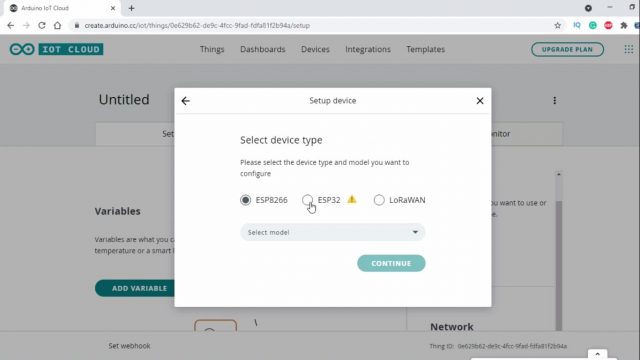 Select the device and model, on the select model drop down menu you can select ESP32 Dev Module and then click on the Continue button. On the next page, give your device a name. 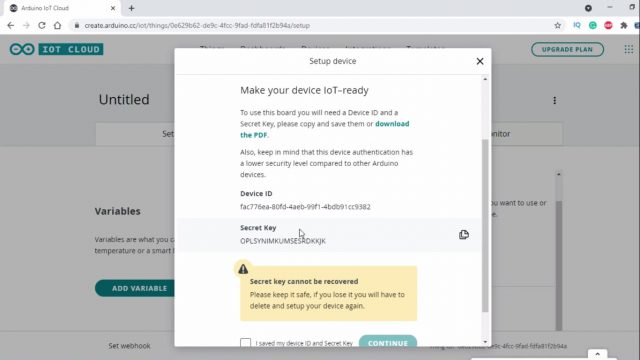 Never share this information with anyone, we will need the Device ID and the Secret Key later, I highly recommend to download the PDF file. Then you can scroll down, check the box, and click on the CONTINUE Button. 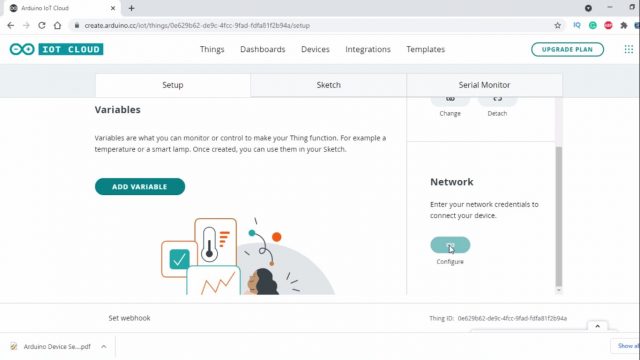 Now scroll down and you can see the Network. You can see the Configure button is disabled, this will become enable after adding at least one variable, so let’s add a variable, for this click on the ADD VARIABLE Button. type the variable name, in my case LED, Select the variable type, in my case, I will select Boolean type because the LED can have only two states High or Low, I am not controlling the brightness. 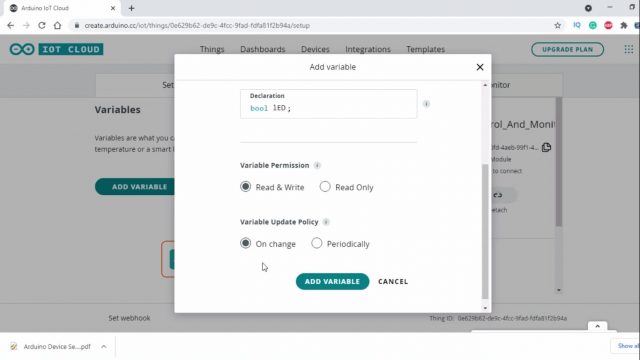 In the variable permission select Read & Write and in the Variable Update Policy select On Change, as I will be using a button to control the ESP32 Onboard LED. So, our variable is setup and now we can click on the ADD VARIABLE Button. The variable will be added. 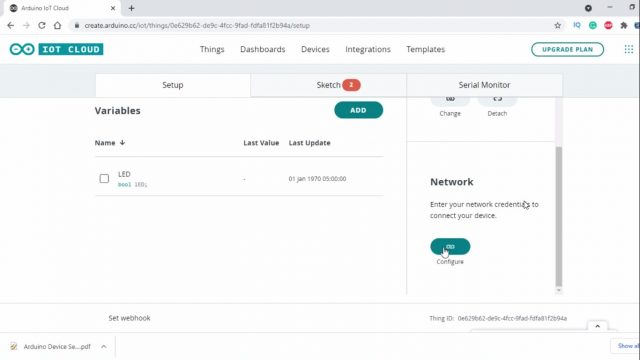 Now, if we go to the Network, we can see the Configure button is now enabled and now we can enter our WiFi credentials. The secret key we will copy from the PDF file. 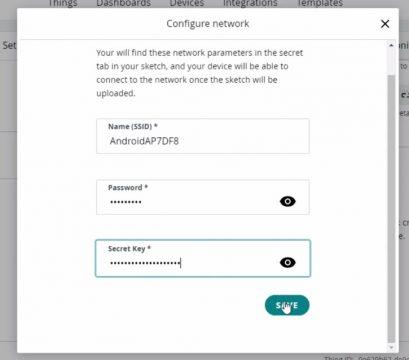 Now we are ready for the programming.

The sketch will be automatically updated, the variable LED that we added will be automatically added. When you first click on the sketch you will get this message “To upload a Sketch via a USB port, make sure the Create Agent is installed and running on this computer”. If this ArduinoCreateAgent is not installed then you won’t be able to upload the code. Click on the learn more. 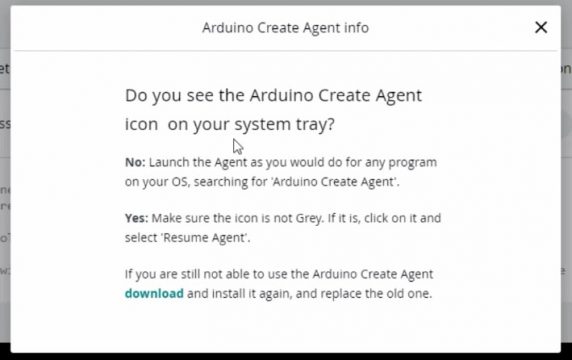 Now to write our code to control an LED let’s open the full editor. While you are still on the sketch scroll up until you see the open full editor button. Select your board type. I started off by defining the pin to which the onboard LED is connected.

Next, in the setup() function I set the led as the output device using the pinMode() function. 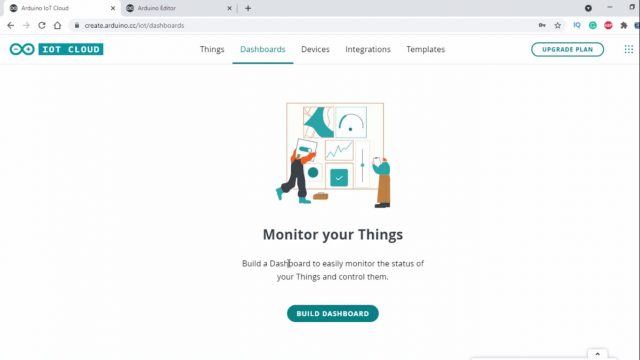 Now open the Dashboards page to add a button and link the variable. Click on the Build Dashboard button.

Our dashboard is ready. Again I opened the program, compiled the code, and finally, I uploaded the code. You can use this button to control the LED. For The practical demonstration watch video tutorial given at the end of this article. 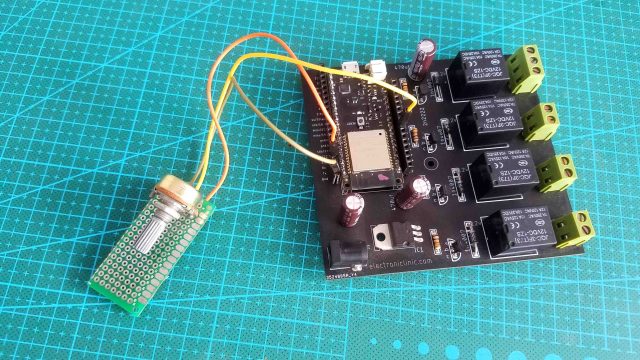 Now to add a variable for the Potentiometer click on the Things and follow the same exact steps as we did for the LED, but this time as we are monitoring a sensor so we will set the variable to the read only, I have explained everything in the video. I have explained how to modify the code and how to add the Gauge.

We have just built a two way communication system using ESP32 and Arduino IoT Cloud, we can monitor the sensor and control the Onboard LED at the same time. Now one last step, if it’s hard for you to use your laptop for controlling and monitoring, then you can use the IoS and Android cell phone App. You will need to download the Arduino IoT Cloud Remote App from the Play Store. You don’t need to do anything, this app is automatically generated and this is the best thing I like about the Arduino IoT Cloud as compared to the Blynk.

UM66 IC and UM3561 IC for Melody and Sirens generation