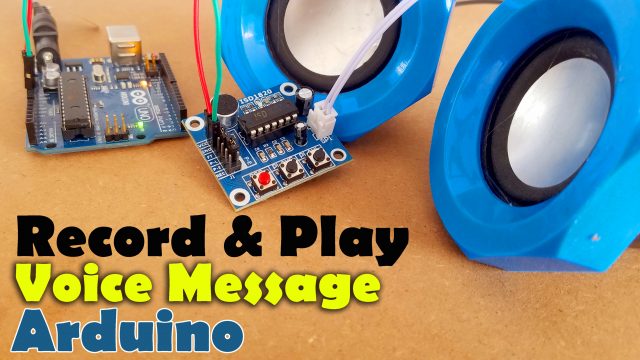 The ISD1820 Voice Recorder and Playback Module can also be used in Security based projects. When an intruder is detected a voice message is played endlessly.

The ISD1820 module can be used in offices where you need to play different voice messages, for example when someone opens the door; a welcome message is played only one time.

If it’s a break time you can record a new message, now this time if someone opens the door the break time voice message will be played. You can record different messages depending on the situation.

About the ISD1820 Voice Recorder and Playback Module: 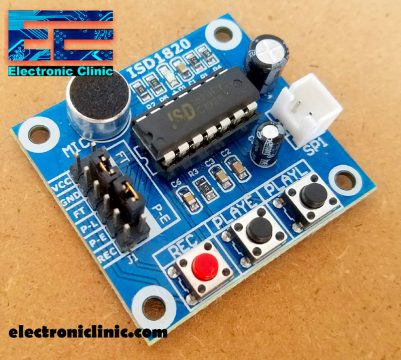 This is the ISD1820 Voice Recorder and Playback Module. This voice recorder module comes with a non-volatile storage and playback capability for 8 to 20 seconds. The recording time can be changed which I will discuss in a minute. 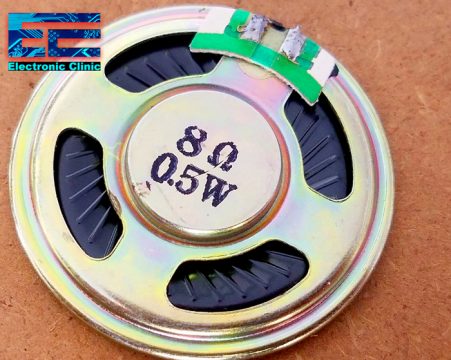 This speaker is good for testing purposes but if you are planning to use this module in a real project then you will need to connect the output of this module to an external amplifier IC like for example LM386. 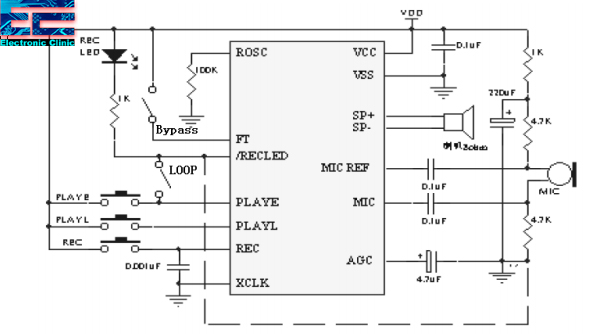 By following this typical schematic you can also make this module by yourself.

This is the ISD1820 IC, a Microphone, this is where we connect the positive and ground wires of the speaker.

As you can see the three push buttons and male headers are clearly labeled as REC, PLAYE, PLAYL, VCC, GND, FT, P-L, P-E, and REC. 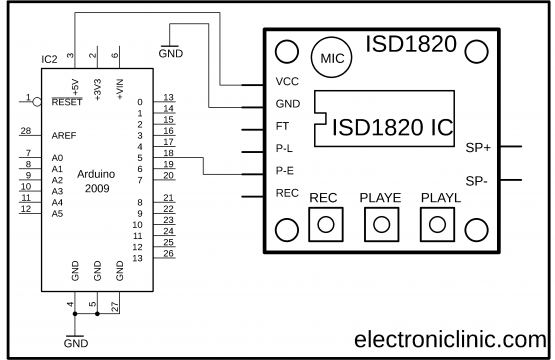 First, let’s check how this module can be manually controlled. Connect 5 volts and ground from the Arduino or a power supply with the VCC and ground pins. Now press the record button and start talking. To play the entire voice message press PLAYE. You need to push and hold the PLAYL button and the message starts playing and if you want to stop the playback at any time, simply release the button.

During the testing, it was hard to hear anything. The .5w 8-ohm speaker is not going to work in real projects, so, before I am going to explain how this module can be automatically controlled using Arduino and sensors, first I replaced the .5w 8-ohm speaker with the external speakers powered up using a 12 volts power supply. 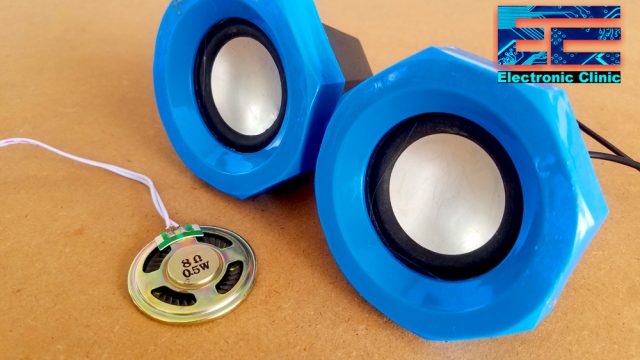 I played the same message again, and this time it was pretty cool. You can even use very high power speakers, so far you are able to provide the desired power needed for the speakers. 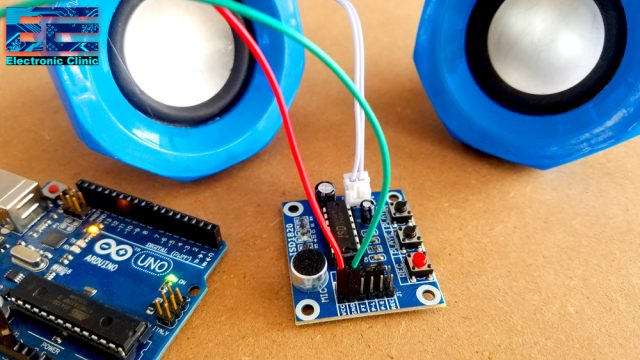 While using the ISD1820 manually, you don’t need the Arduino or any other controller board. All you need is the 5 volts power supply. In the picture above, I am only using the Arduino to power up the ISD1820 Voice Recorder and Playback Module.

Using the male headers the ISD1820 can be easily interfaced with the Arduino. The circuit diagram and programming is explained below, or you can also watch a video available at the end of this article. 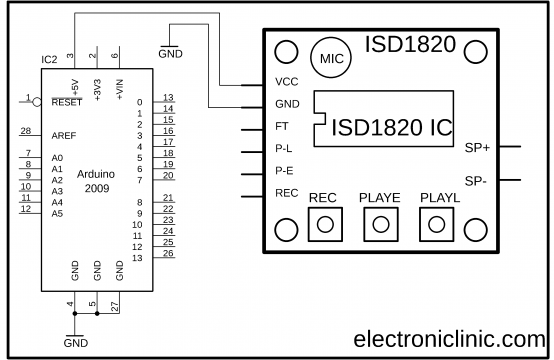 For the ISD1820 Voice recorder module, you don’t need any library. As you can see the P_E pin of the voice recorder module is connected with the Arduino’s pin number 5. The pin is set as the input using the pinMode() function. Now to play a voice message endlessly you need to change the pin status.

Now let’s make this a little bit complex by making a hit detection system for a car. So, when a hit is detected a voice message will be played endlessly.

If some end up in a car accident, along with text message to the parents/guardians a voice message can be played to inform the people far away from the accident location. I have a detailed tutorial in which a message is sent to the parents along with the GPS location. In the following project, I am not using the gsm module. But you can add this project with my previous project based on the Car accident location tracking.

I am using the same Arduino pin number 5. Rest of the programming I have already explained in the FlexiForce getting started tutorial, in the code I did a little modification, I added the if condition which means if the force value is greater than or equal to 3 then enter into an infinite while loop which plays the voice message again and again.

For the practical demonstration, watch video give at the end of this article. 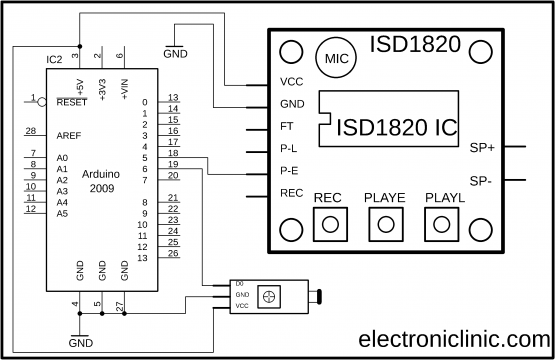 As you can see the LDR module D0 pin is connected with the Arduino’s pin number 6. Using the if condition we check if the light falling on the LDR is blocked. So, if someone has blocked the light then the controls enter into an infinite while loop and play the voice message endlessly.

For the practical demonstration watch video available at the end.

ISD1820 and Reed Sensor with Arduino: 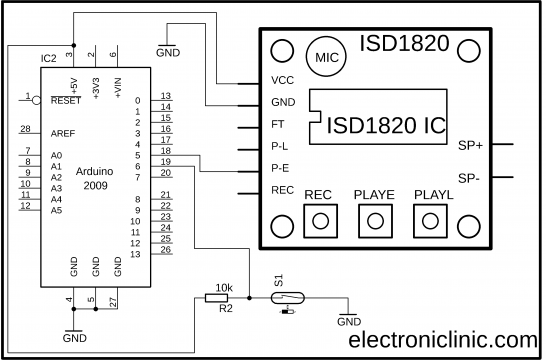 This is the same program, this time I only changed the pin name from the LDR to reed_sensor, and I deleted the infinite while loop. I am using two if the conditions to check if the door is closed or the door is opened. This way the voice message is played only one time when the door is opened. To play the same message again, first, the door should be closed and then open again.

This project can be used in offices, where multiple messages can be played depending on the situation. The controller programming remains the same. Different voice messages can be recorded. Each time the door is opened a message will be played only one time. This is practically demonstrated in the video given below.