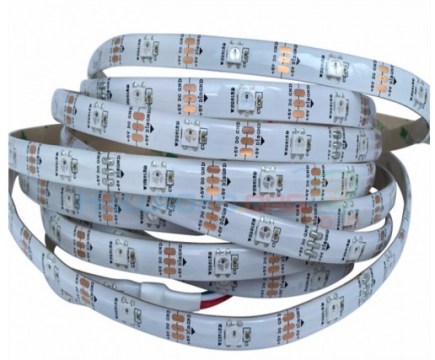 How do we go about controlling individually addressable LEDs using an Arduino uno or Arduino Nano. LEDs can add some pizzazz to your projects, to your home, and if you are not a complete loser to your gaming computer.

Now to build the circuit we plug in the power rails on the breadboard from the Arduino ground and 5 volt and then we plug the capacitor with a positive end on the 5 volt supply through the power rails and the negative end with the ground. We take digital pin number 2 of the Arduino and set it up through a 330 ohm resistor and then we take the jumper wires from the resistor and connect it to the middle of the led strip which is Din. Now connect the 5V from the bread board to the 5V of the led strip and connect the ground wire from the bread board to the ground of the led strip. You can follow the same exact connections if you plan to use Arduino Uno.

So now that we have the circuit completed let’s jump into the code.

First thing you want to do is to download the FastLED library, open your library manager in the Arduino IDE. 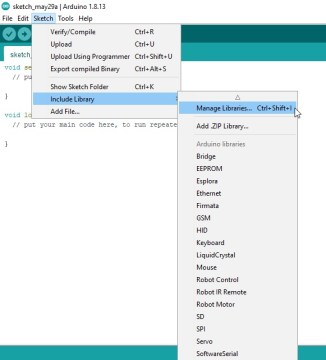 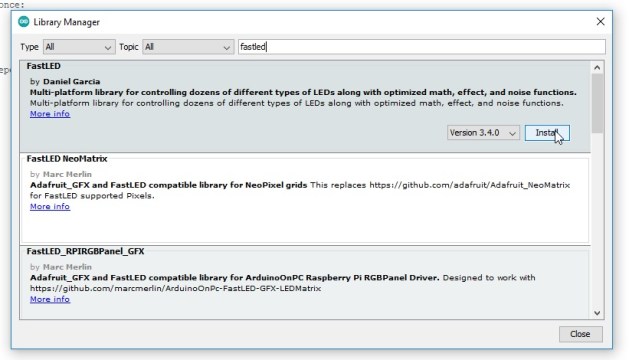 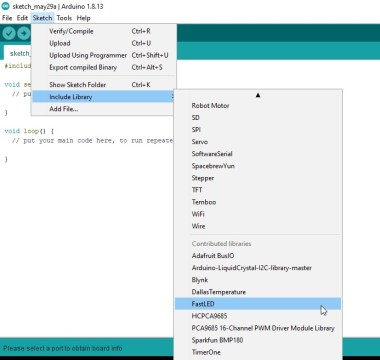 Now let’s go to the setup function and set up the LEDs we want to use the FastLED add LEDs method and inside angular brackets we use the type of LEDs. In our case we have ws2812 these are control on the LED pin using the RGB calibration then in parentheses we say that those LEDs will use the array we declared earlier and that there are 12 LEDs present which is NUM LEDs.

Next we want to set up a power fail safe by limiting the max power in volts and milliamps to 5 volt and 500 milliamps this just makes sure that the Arduino is not drawing too much current.

Then we want to clear the LEDs every time we upload a new code by using FastLED.clear() and FastLED.show().

Now we say that FastLED.show() actually show the results on the LEDs and we see that our order is a little bit off instead of having red first we have green first and to fix this we come up into the setup function and say that instead of RGB the order is green red and blue.

Now you justhave two changes to whatever result you get from running the code below since my order is green red blue I change the calibration and whenever I run this code the proper values are spitting out to the LEDs.

So now that we have the LEDs calibrated let’s turn all the lights on the strip red so that is going to be using a for loop we are iterating through the entire array of LEDs starting at zero up until the length of the array and we are going to say that for every LED we will change the RGB color to red.

We say fast LEDs show to actually show the values.

if we want to do a mix of colors to produce let’s say purple we can change the red value to 255 and the blue value to 255.

When we upload that code we get somewhat of a purple.

You can see we’re generally getting purple so let’s say we want to keep this purple colour and make the lights flash.

So to add a flash we use the method FastLED.setBrightness() this is actually setting the level the brightness of the lights and we want this to increment starting from zero and it increments based on whatever iteration we are in the for loop.

So it’s getting brighter for every iteration we go through and to reverse the flashing effect we copy and paste the for loop down and reverse it so we start at the number of LEDs which is 12 when we decrease the value so the brightness starts high and it goes low as the loop progresses we add a delay just so you can see the effect take place.

You just had to tweak it to whatever speed you want. So our final task in this tutorial is going to be to turn the lights from green to blue as we progress from left to right and we do that by decreasing the green RGB value by 20 every iteration because after 12 iterations the green value will be close to zero and then we say for the blue value we increase from zero by 20 every iteration because that will end at 240 which is close to blue.

Now for the reverse for loop let’s start at red and transition to magenta. The red value at 255 and gradually decrease it so the red value here will start really high and then gradually get lower because it’s a reverse for loop that starts at 12 and goes all the way down to 1 then we want to increase the blue value as we progress and it looks strange that we are subtracting a value to increase it but that’s just because we start at a high number and we are subtracting it by less and less as we go on.

When we upload the code you can see that we have changing colors with respect to time from left to right. We transition from green to blue and from right to left we transition from red to magenta. This tutorial is just the starting point for individually addressable LEDs you can do a lot more with these you can tweak the delay values the brightness and the colors all to make your own custom patterns.

How to make a Quadcopter Drone using CC3D Flight controller