Let’s see the construction of a DC machine it is made up of stationary parts such as yoke, poles and brushes and rotating parts such as armature, commutator and bearings.

The yoke is the outer frame of the DC machine made up of a magnetic material such as cast iron the pole every machine has even number of poles divided into three parts as pole core, Pole shoe, and the field winding.

The armature core is cylindrical in shape and is mounted on a circular shaft. Armature is a part of a machine which rotates in a circular direction.

A commutator is a cylindrical body mounted on a shaft along with the armature thus forming a single body. Hence the commutator also rotates along with the armature. The brushes are made up of carbon and mounted on the commutator. They are stationary and do not rotate. The external load circuitry is connected across these brushes as shown. The main function of the bearings is to support the rotating part and allow its smooth motion with minimum friction.

Working Principle of the DC Generator: 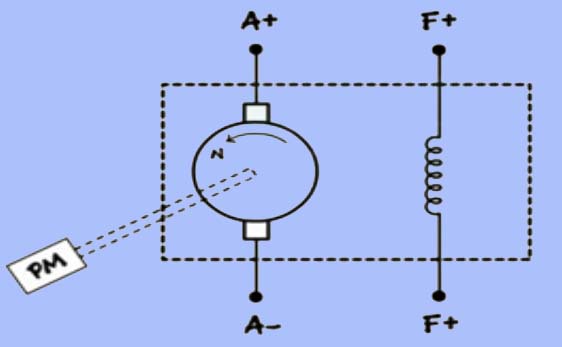 Construction of the DC Generator:

The DC generator is constructed by keeping the two conductors A B and C D between two magnets both these conductors are connected to the commutator and the brushes are mounted on the surface of these commutators to which the external circuit is connected. Whenever the conductors cut the magnetic flux lines the EMF is induced that causes the current to flow through the load circuit. when the conductor A B reaches the vertical position rotating in clockwise direction. We get the maximum current as it continues its motion and reaches to 180 degrees position the current becomes zero momentary. Thus from zero degrees to 180 degrees rotation we get the positive half of the AC current generated. when the conductor A B attains the vertical value at 270 degrees we get the maximum current again and the process continues generating a continuous AC current. Now during the positive half conductor A B touches the brush b1 thus B one attains the positive charge giving the positive cycle at the output. When A B touches the brush B 2 V 2 attains the positive charge providing the positive cycle again the commutators are so designed that for every cycle. The current will flow out towards the circuit given positive output only. The EMF equation for the DC generator is given by:

The DC generator is basically divided into two categories:

Self-excited are further divided as:

In the separately excited DC generator the field winding is supplied from the external separate DC supply the EMF induced is given by the equation: 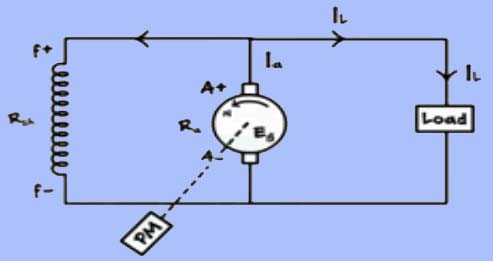 Applications of the shunt generator:

Thus we get the following load characteristics the application of the shunt generator is:

The graph starts from the non-zero voltage value. 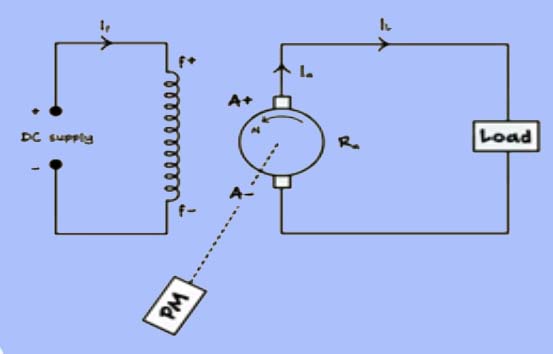 Applications of the Series Generator:

The applications of the series generator are used as boosters on DC feeders and as constant current generators for welding generators and lamps.

If we move the wire through the magnetic field, then a potential difference is

– We use stronger magnetic field

– If we move wire or circuit more frequently

(more turns of the coil, greater induced potential and current in the wire or circuit)

In this example, you can see magnet how move in and out from the coil of a wire, as you can see this also produces an induced current. As we have seen in past examples, direction of the current changes when the direction of movement of the magnet changes. Remember that we can also change direction of the induced current if we switch poles of the magnet. We have to go through one more thing and this thing is quite tricky. As we have seen, when we move a magnet into a coil of wire, a current is induced in the wire. As we already know, induced current create own magnetic field and this magnetic field opposes the movement of the magnet. Let we explain this, when we insert the North Pole into the coil that end of the coil also becomes a North Pole, this repels the magnet (as we know from magnetism, the same poles are repelled), making it harder to push magnet in the coil. When we pull out magnet from the coil, that end of the coil becomes south pole, this attracts the magnet (as we know from magnetism, opposite poles attract each other), making it harder to pull it out. Because the induced current makes it harder to move the magnet, this actually means that we are making work. We are transferring energy from the movement of the magnet into the movement of the current If we go back to our diagram, we can see that if we move the wire through the magnetic field, then a potential difference is

Similarities between motor and generator:

Motor effect is the term used when a current-carrying wire in the presence of a magnetic field experiences a force. Generator effect is the effect whereby a wire or coil moving in a magnetic field generates an induced potential difference or induced current. As we see from definitions these two effects serve different functions, but there is similarity in the principle, in fact, there is similarity from the construction point of view:

– Armature is used to achieve the effect in both cases so it is always a conductor or a conductive coil. The armature’s role is twofold.

The first is to carry current across the field and second role is to generate an electromotive force (EMF). As we say this two effects serve different functions and they have a lot of differences.

Difference between Motor and Generator:

In case of motor effect electric energy is the input and mechanical energy is the output. Let’s clarify when we put a current-carrying wire in the magnetic field this current-carrying wire experiences a force. In case of generator, mechanical energy is the input and electric energy is the output. Let’s clarify if we move the wire through the magnetic field, or if we move magnet into coil of wire, like shown, then a potential difference is induced across the ends of the wire or If we have complete circuit, then, in this circuit we induce current. Motor effect follow Fleming’s left hand rule in other words, Generator effect follow Fleming’s right hand rule.

Example of Motor and Generator:

If we show examples of motor effect and generator effect. An example of Motor effect is an electric car or bike where electric current is supplied to the machine or device, and it gets converted into mechanical motion and, as a result, the car or bike moves.

The example of Generator is that in power stations the turbine is used as a device which converts mechanical energy of force of water falling from the dam to generate electric energy.