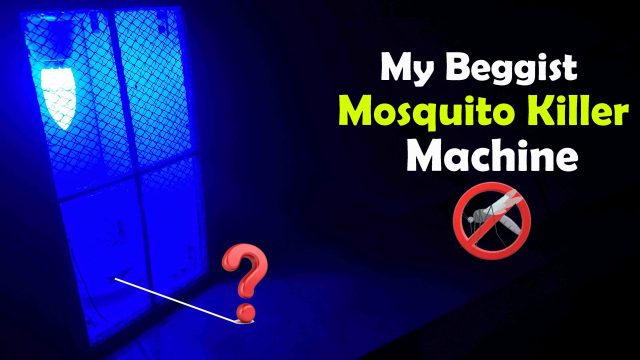 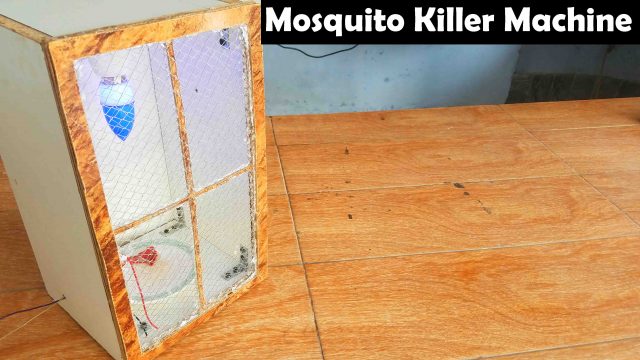 The front part is just like the Mosquito killer Racket, and everything else is completely different. It has got a door on the backside which can be opened and closed, I will explain this in detail; why I added this door, it could be a solid box, but there is a reason behind it which I will explain in a minute. The circuit I am using for generating high voltages, directly operates on 110/220Vac, I didn’t use any transformer and there are no complicated connections. I will also share with you a very simple technique that you can use to generate high voltages of your choice. 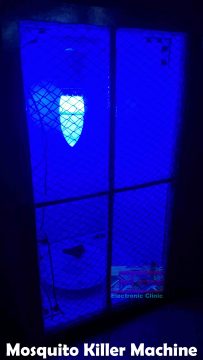 To check the performance and to see if it can really kill the mosquitoes, flies, and other insects I decided to keep it ON for the entire night. It has passed all the initial tests and I am sure it’s going to kill these blood-sucking small creatures. I am going to check this in the morning. 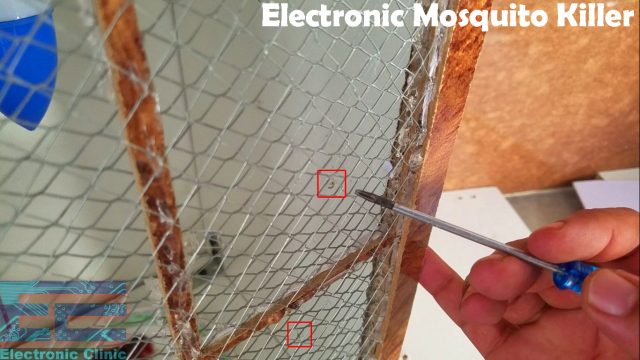 I already can see some dead mosquitoes and it means this device is working great. This is such a low-cost and easy build Electronic Mosquito killer machine which can be built by anyone with some basic knowledge of electronics.

Warning!!! I must warn you, wear protective gloves while working on such a high voltage system and keep them away from children and other people. Anyways, you have got the idea of what you are going to learn after reading this article. Without any further delay, let’s get started!!!

Why we need this Electronic Mosquito Killer? 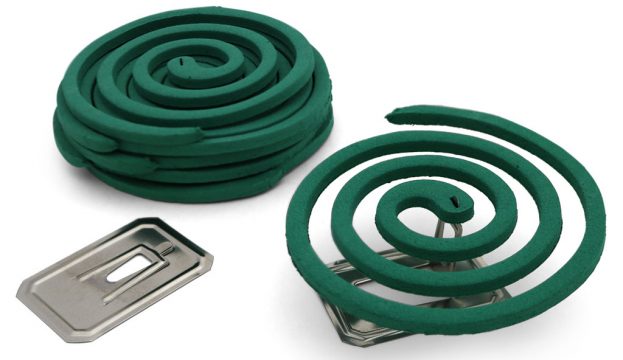 I am sure you might have seen these mosquito coils. There’s growing concern about the adverse health impacts associated with the burning of mosquito coils and sticks indoors. The insecticide products used are generally considered safe, but it’s the particulate matter produced from a smouldering mosquito coil that poses the greatest risk. One study estimated the particulate matter produced from burning one mosquito coil was equivalent to burning 75-137 cigarettes. Although there is no clear evidence but I believe the continuous use of such mosquito coils may cause severe damage. There are also body lotions that are used to keep the mosquitoes away. These are dangerous to the health and costs a lot when used on regular basis. A more permanent solution can be designing a machine that can kill the mosquitoes and also the flies and other insects. The electronic mosquito killing machine can be operated 24 hours a day and has no side effects.

For building the box, I temporarily fixed the Electric circular Saw and Jig Saw on a hardboard sheet, which helped me in cutting the hardboard sheet to the desired lengths without going to the shop which saved me money and time. I am really thankful to all those boys and girls who are supporting me on Patreon. With your support, I purchase these electric tools and other electronics components. 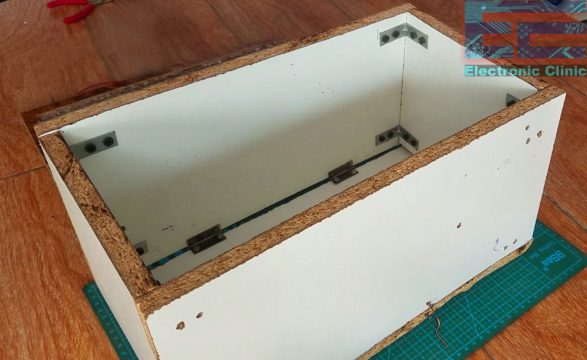 It’s just a simple box made of a hardboard sheet. You can clearly see one side is open while on the backside you can see a door. So, the box is ready, and next, I am going to start working on the two meshes.

I carefully cut a sheet, its length and width match the opening of the box. I draw some lines and then I used a Jig Saw for cutting the unwanted area. 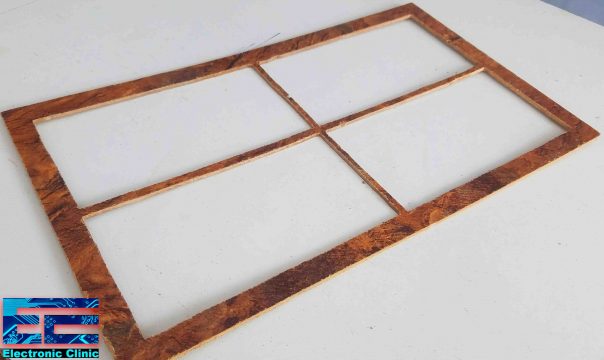 My mesh separator is ready. You cannot find this thin wooden sheet then you can also use a thin cardboard sheet. It’s only purpose is to electrically isolate the two steel wire meshes. 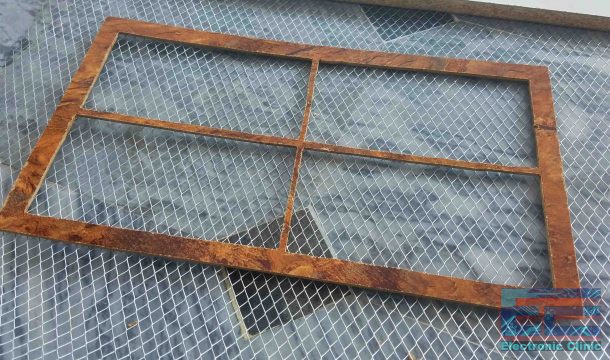 Next, I am going to cut this steel wire mesh and will attach it to the separator using hot glue. I will do the same thing for the other mesh as well. 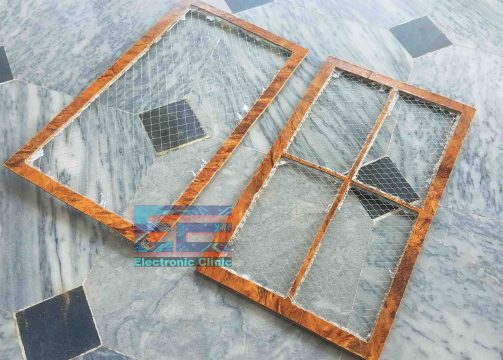 As you can see the two meshes are ready. The separator will be sandwitched between the two steel wire meshes, this way the two meshes will not touch. 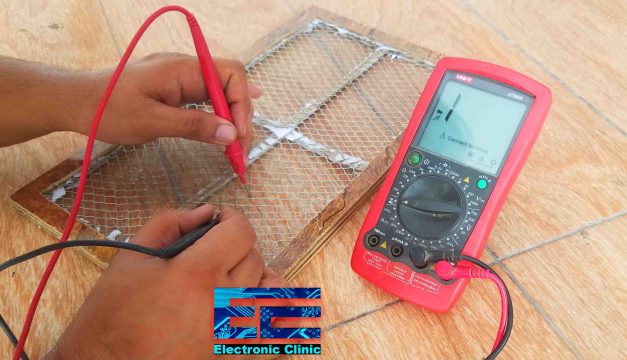 You can check this through a continuity test using a digital multimeter. No beep means everything is fine and a beep means the two meshes are short which is not good. My mesh is ready and now let’s take a look at the Mosquito killer circuit diagram.

This is the high voltage mosquito killer circuit diagram which only consists of capacitors and diodes. This is basically a voltage multiplier circuit which gives a high voltage of around 1860 volts. As a general rule of thumb, multiply the total number of capacitors with the voltage and then divide it by 2 and you get the output voltage. As per this circuit the capacitor voltage is 630volts and we have a total of 6 capacitors so

So, the output of this Mosquito killer circuit is around 1890 volts.

This circuit also called Cockroft Walton, it consists of six diodes and six capacitors it has three stages of voltage doubler. To make it easier to understand, how this circuit works, let’s look at a single stage voltage doubler.

Assuming we connect this circuit to 220 volt RMS with a frequency of 50 Hertz and its peak voltage is 311 volts. AC voltage with a frequency of 50 Hertz changes its polarity 100 times per second. During the negative cycle the upper side will be negative and the lower side will be positive, so the capacitor on the upper side will charge through this diode to about 311 volts. However, there is some voltage drop across the diode but it is negligible in the next positive cycle of the input AC Voltage.

Now the upper side will be positive and the lower side will be negative, this time because we have a charged capacitor from the prior cycle and because the voltage of the capacitor and voltage of the source are in series, so the two voltages added together and going to charge the second capacitor through this diode so the voltage is stored in the second capacitor will be something around 620 volt. By adding more stages we will take higher voltage in the output.

I’m using three stages of this voltage doubler so the output voltage will be around 1860 volt. The capacitance of the capacitors could be anything less than 1 micro farad keep in your mind that the voltage rating of the capacitors used in this circuit should be at least two times more than the peak input voltage. For example, in my case because the mains voltage is 220 volt the peak voltage will be 311 volt. So I have to use capacitors with voltage rating at least 630 volt but it’s better to use in 1000 volt capacitors.

I soldered all the capacitors and diodes as per the circuit diagram. The two wires on the left side are going to be connected with the 110/220Vac. When the wires are connected with the 110/220Vac supply don’t touch the circuit otherwise it can be really dangerous and such high voltage can kill you. So, always wear protective gloves. The two wires on the right side are the output wires which we will connect with the two steel wire meshes.

Before connecting the output wires with the steel wire meshes, I check the circuit by shorting the output wire together and I could see sparks. One more thing that I would like to talk about is that, even when you disconnect the mains supply you will get a strong electric shock because the capacitors remain charged until you touch the two wires to discharge the capacitors. So, make sure, first you discharge the capacitors before you touch the wires, capacitors, or diodes. Next step is to connect this circuit with the two meshes. 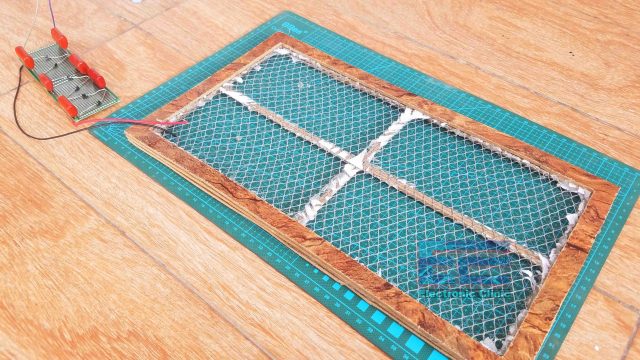 So, my circuit is connected, I have already connected the input wires with the 220Vac, the capacitors are charged. So, If I am going to short the two meshes using a screw driver, you will see sparks, I practically demonstrated this in the video given at the end of this article. While the 220Vac is connected never touch the steel wire meshes, anyways so far everything is working just fine.

I fixed the Voltage multiplier circuit inside the box and I also connected a blue color bulb with the input wires. 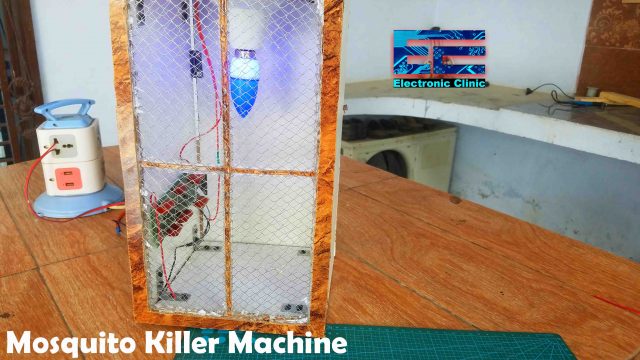 My whole setup is completed, the bulb is fixed, the wires are connected and now it’s ready for it’s initially testing. 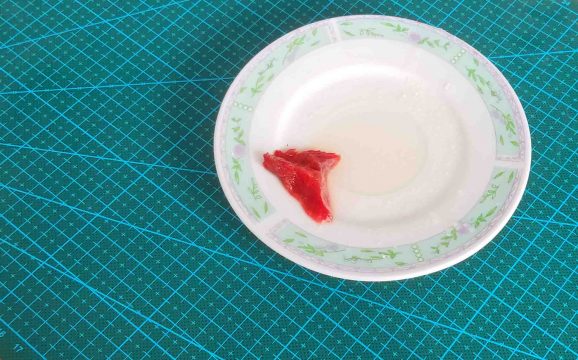 I put some sugar and a small piece of meat which I am going to use as the mosquito bait to attract some flies, mosquitoes, and other insects. As I had told you in the beginning that the door which I have added has a purpose, I am going to open the door and put this plate inside the box. I am sure the sugar and meat will attract flies, mosquitoes, and other insects. The only entrance is through these two meshes which will burn the flies and mosquitoes to ashes.

As this Mosquitoes killer machine deals with high voltages so that’s why I decided to check this during the nighttime when nobody is around and I also informed everyone personally not to touch this box. Anyways the blue light looks so cool and the whole system looks like a decoration piece. I love these sparks and the sound it makes when I short the two meshes. Seriously I could do it for hours, but I had to stop as I had to kill mosquitoes.

The next morning I could see dead bodies of some mosquitoes hanging with the steel wire meshes and I was really happy because it did it’s job. It’s very environment friendly as no chemicals are used. It has 0 side effects, but it needs to be placed at some height so that nobody can touch the box. So, that’s all for now.