In this article we take a look at two sensors the KY-17 and the KY-27. The reason we look at two sensors is these shields have the same built-in sensor and that’s called a mercury tilt switch. Both the sensors work similarly the only difference is the KY027 has built-in led.

The mercury tilt sensor is a tilt sensor which opens and closes an electrical circuit when it is inclined beyond a certain angle. It can be used in tilt prevention device, an alarm circuit, and in many DIY projects. There are different types of tilt switch sensor modules for sensing the tilt and module can have a ball switch or mercury switch. 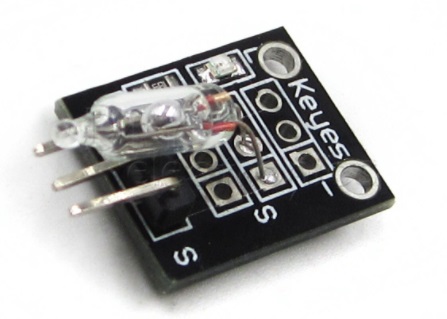 Working of the Mercury Tilt Sensor:

in this, the first case is not tilted initially. When it is in not tilted position as shown in the image it gives low output because of the liquid mercury complete the circuit by connecting the two electrodes. When the output is low on board LED remain on.

In the case2, the sensor is tilted, mercury is inclined in a particular direction or angle. The liquid mercury breaks the contact between the metal electrodes and the circuit gets open. Hence we get high output in this condition and the onboard LED turns off.

Inside this glass is a liquid and that liquid is mercury and mercury is extreme toxic so watch out be careful at all times, if the glass is leaking throw out the sensor away and do not touch it with your skin. This is how it works there are three wires inside the glass envelope a“+” , “-” and signal and the mercurydot is always connected with the with the signal wire and when it tilts it connects the signal with the plus and then you have a signal in the other side it connects the mercury with the “–“. 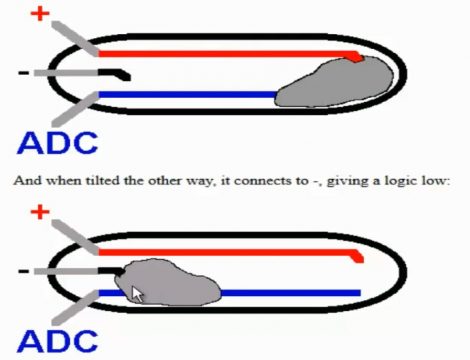 These kinds of sensors are a little bit outdated you are not good enough to use in mobile devices and because of the toxic it’s not used in the food process; in the past those sensors have been used a lot in the industry.

Interfacing of the Mercury Tilt Sensor with Arduino: 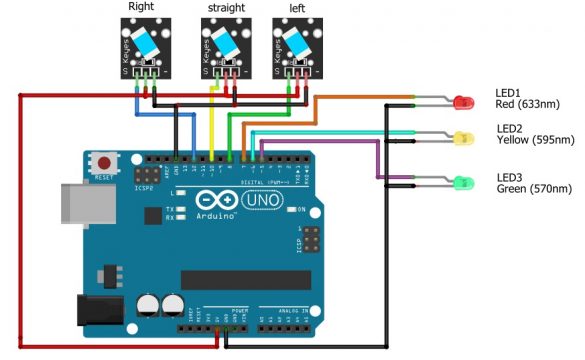 In the next step we define the pins used for the mercury sensors which are 12, 10, and 8.

Now, in the setup function we will declare the led as output means that it will be turned on when the mercury sensor will detect any movement.

Now in the loop function we will declare three functions which will show that whether the left sensor is turned on, right sensor, or straight sensor.

Now if the left sensor is high means it detected the motion then:

Read the current state of the sensor

After reading the current state of the sensor, if the sensor is high and brightnessA != HIGH means the led is not turned on then turn on the led.

Otherwise the led will be turned off

Similar process will be used for the right sensor, if it is high then turn on the led and if the statement is false turn off the led.

This sensor closes the circuit when it is tilted to the side as long as it is moved with enough force and degree of inclination to activate the ball switch inside. 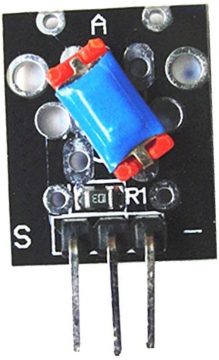 The KY-020 Tilt Ball Switch Sensor consists of a 10KΩ resistor and a metallic ball switch with bi-directional conduction that will open/close the circuit depending on its tilt degree. It does not measure the tilt angle.

Interfacing the Tilt ball Switch sensor with the Arduino: 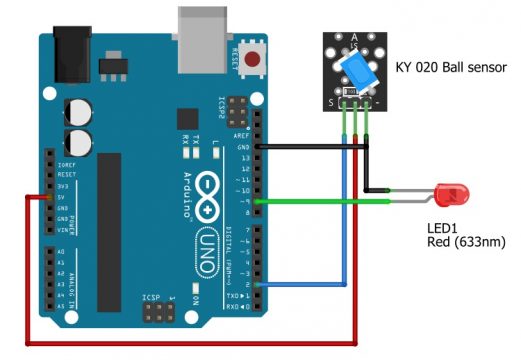 Now after uploading the code to the Arduino, when we will tilt the sensor the led will turn on.