The 50 Hertz signal around us in a modern home or office is injected into a high gain amplifier the output of this amplifier is connected to the comparator. The AC signal is then converted to the square wave. We can adjust the sensitivity of the sensor by adjusting the trimmer. When we will touch the sensor the led will starts blinking. If you look closely at the led you will see a slight flicker this is due to the output that is represented by a square wave of 50 Hertz instead of constant value.

Features of the KY-036 touch sensor:

These are some features of the sensor:

There are two built-in LEDs on the sensor module. The LED1 shows that the sensor is supplied with voltage and the LED2 will show that the sensor is detecting magnetic field. The main component of the KY-036 Metal Touch sensor module on its circuit board is the sensor unit at the front of the module which measures the area physically and send an analog signal to the second unit, the amplifier. The amplifier amplifies the signal according to the resistors value of the potentiometer and send the signal to the analog output of the Metal Touch Sensor module. The third component is a comparator which switch the digital output and the LED. If the signal falls under a specific value you can control the sensitivity by adjusting the potentiometer, here please note the signal will be inverted that may that if you measure a higher level high value it is shown as a low-voltage value at the analog output. The sensor does not show absolute value it is a relative measurements you define an extreme value to a given normal environment situation and a signal will be sent if the measurement exceeds the extreme value.

The way the KY-036 Metal Touch sensor module works is that it detects electrical conductivity and our bodies are like big conductors and if we touch the sensor then the Arduino will detect a signal. We use this kind of technology every day with touch screens on our mobile devices. A good example of this sensor is the security of table saws the technology behind it’s actually quite simple the blade carries a small electrical charge. 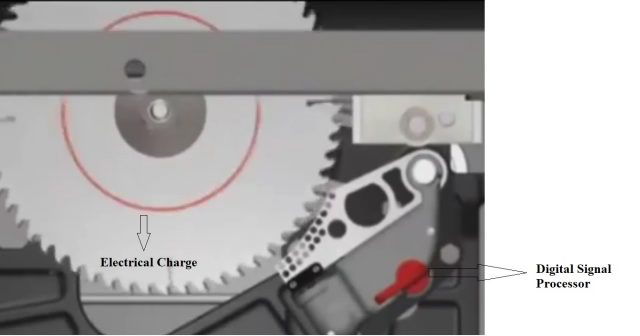 This charge is continuously monitored by a digital signal processor when contact is made the human body absorbs some of the charge causing the voltage to drop, the drop in voltage triggers a quick release aluminum break, a heavy-duty spring forces the break into the teeth of these spinning blade, the teeth dig into the aluminum stopping, the blade cold the blades momentum forces it to retract below the table and the motor is automatically shut off.

Working Principle of the KY-036:

Let us quickly understand the working principle of the KY-036 Metal Touch sensor module. Basically, the functionality of the KY-036 Metal Touch sensor module is divided into three main components first the sensor unit at the front of the module which measures the area physically and sends an analog signal to the second unit the amplifier. The amplifier basically amplifies the signal and according to the resistance value of the potentiometer and sends the signal to the analog output of the module also you can set the sensitivity of the sensor by adjusting the knob of the potentiometer. If you rotate it in clockwise direction you can increase the sensitivity and if you rotate it in anti-clockwise direction you can reduce the sensitivity as shown in the diagram. 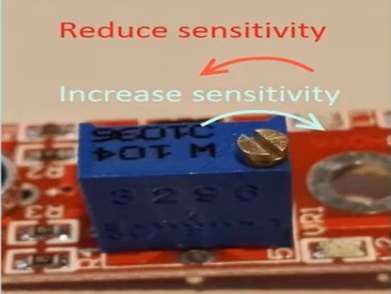 The comparator will switches the digital out and turn on the led if the signal falls under a specific value.

We will be using digital signal pin, the VCC pin, and the ground of the sensor to interface it with Arduino.

So, if you go ahead and upload this code, you will be able to control the LED. This is just a basic program to check if it is really working.

Now we will connect the touch KY-036 Touch Sensor with Arduino and relay module and when we touch the sensor bulb will turn on and in this way we can control home appliances and turn it on and off by just touching the sensor. 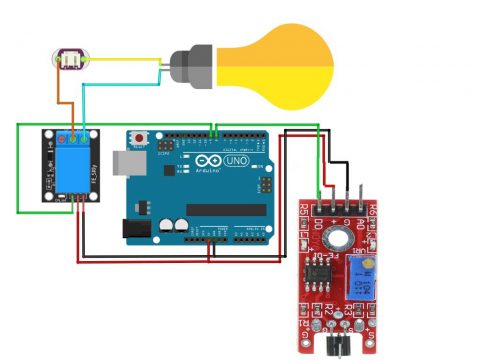 Now the circuit is completed and after uploading the code when we will touch the sensor the bulb will be on.