MIT APP inventor Arduino Bluetooth Application- I have been using Bluetooth supported cell phone apps for monitoring and controlling different types of sensors and electrical loads. I designed all of my previous apps in Android Studio. A few months back I uploaded articles on how to design your own android app for controlling electrical loads and how to design your own android cell phone app for monitoring the sensors connected with the Arduino. These two articles got very popular and helped many boys and girls in designing their own cell phone apps for controlling and monitoring electronics connected with the Arduino. So, if you are into the Android Studio thing then you should read these articles. If you think programming is difficult for you and you are only comfortable with drag and drop type work then this article is for you. Because the Cell Phone App we are going to make today doesn’t require any coding. Amazing!!!

As this is my first article on the MIT APP Inventor, so I will try to keep things simpler so that you guys can easily follow each and every step. So, instead of doing something complex, I will start with the LED, You know ? if you can control an LED it means you can control a transistor, a Mosfet, a relay etc. So, In this article we will going to learn how to control the LED connected with the Arduino Uno or Arduino Nano or Arduino Mega, using Bluetooth app. I will add two buttons which can be used to turn ON and turn OFF the LED connected with the Arduino board. In the future you can replace this LED with other electrical devices which you want to control. The cell phone app will wirelessly communicate with the Arduino with the help of the HC05 Bluetooth Module. So, what we have is at HC05 Bluetooth module? if you look at the front side it will look it will show you some kind of antenna here on hc-05 Bluetooth module and on the back side when we look at that we will see the every pin on this module. The first pin is enable en, second pin is VCC, the third pin is a ground and then the fourth one is a TXD and the fifth one is RXD. So this is how the pin label has been given on this hc-05 Bluetooth module. 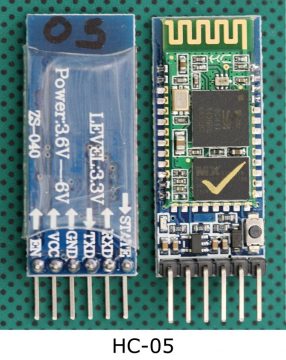 Interfacing of HC-05 with Arduino: 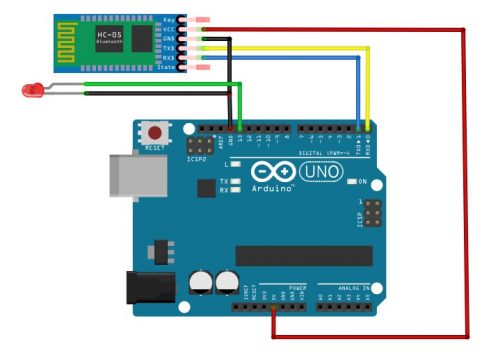 In order to make a successful communication, you will need to program the Arduino board. Next, we are going to write a very basic program to read the HC05 Bluetooth module and then control the LED as per the command received from the cell Phone App designed in MIT App Inventor.

The very first thing that you might have noticed is that, no libraries are used. We don’t need to download any library for this particular project. As I am planning to use the Arduino’s default serial port. If in your case you want to use other pins as the Serial port then you will need to add the SoftwareSerial library which I have already covered in my previous articles. So, for now no library is needed.

I started off by defining a variable Incoming_value of the type char and initially stored a value of 0. As I will be sending only one character from my designed cell phone App, so this is why I selected the char data type. So, the received value will be stored in this variable.

You know, every Arduino program has at least two functions which are the void setup() and void loop() functions. Void means these functions have no return type. So, let’s go ahead and start with the void setup() function. You can clearly see, inside the void setup() function we have only two lines of code. The first line Serial.begin(9600); activates the serial port and inside the parenthesis you can see a number 9600, this is the baud rate. This is the communication speed and it should be same on both the devices. As I have selected 9600 for the Arduino so I will use the same baud rate on the cell Phone App as well. Make this a permanent part of your memory, whenever you are communicating between devices use the same baud rate. The next line pinMode(13, OUTPUT);

Incoming_value = Serial.read(); this line of code is used to read the serial port and store the received value in the variable Incoming_value.

Serial.print(Incoming_value);  this line of code is used to print the received charater.

if(Incoming_value == ‘1’)    this condition is used to check if the received value is 1, then turn on the LED.

So, that’s all about the Arduino Bluetooth Module programming.

Now to create a mobile app using MIT App Inventor we have to browse the web page App Inventor https://appinventor.mit.edu/explore/get-started

So, we first have to come to this web page and then we have to click on create app button in your upper right corner. 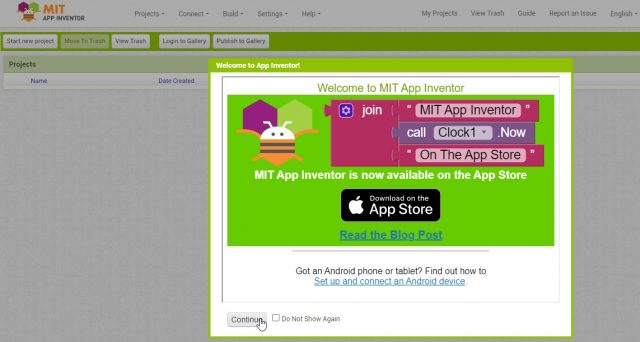 Then another dialogue will appear and we will click on the start new blink project. Now to start creating a mobile app we have to create a project and you see there is a button called start a new project upper left corner. 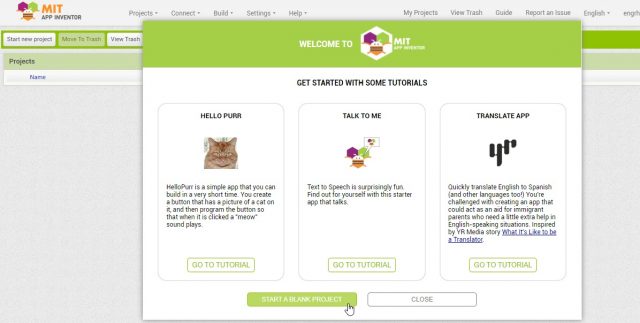 I would like to give the name to the app as a Bluetooth and then hit on OK so you see it creates a project with the name Bluetooth. It takes a couple of minutes and then it will straightaway take you to the project itself. 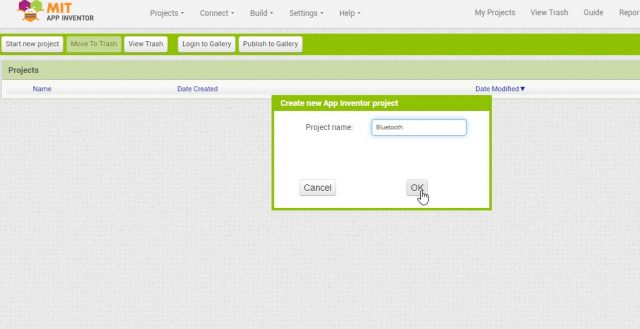 If you look at the App Inventor how it works is it basically gives you two views right if you look at upper right corner there is a designer view and block view.  So if I click on block view you can see there are some widgets in the left pan so there we can select some widgets and then we can create an app so design of view.

Now we can start laying down the components which we need in order to make this app work with the hc-05 bluetooth module and arduino. So the first component we need is a list picker so we have to take a list picker element and you see here is a list picker I can select the list picker in the left pan and drag it to my mobile app. So this is a mobile screen where I can drag down.

In the left pane here the width I will make it as a fill parent and say okay and it looks a little bit better. Now and I would like to give it a name so if you scroll down this you can see there must be a text field. So I would like to give the name LED Bluetooth so look at this when I hit enter you see the name of the list picker is changed. So basically this is a normal button which you can click and then you will see a different Bluetooth client in a list. So there we have to select hc-05 because that’s the Bluetooth module that we want to communicate with using this mobile app that we are creating.

Now the second component we want is an horizontal arrangement. So if we click on layout section there is a horizontal layout. In a layout section so I will drag it to my mobile apps and I select it and then I would going to say width and say fill parent.

Then again just the way we did in the text section I will give the name on and you see the name of a button one is changed to on because when I press the button in a mobile app it will turn on the LED connected to Arduino using hc-05 Bluetooth module and let’s give it a name to other button. Button number 2 select the button number two and then weight fill parent and then give it a name OFF.

Now we laid down the user interface components now we have to write logic so that it will take an action that we want it to perform through the mobile app. So we will click on upper right corner you see there is a block view so we click on block view and then we select the list picker. 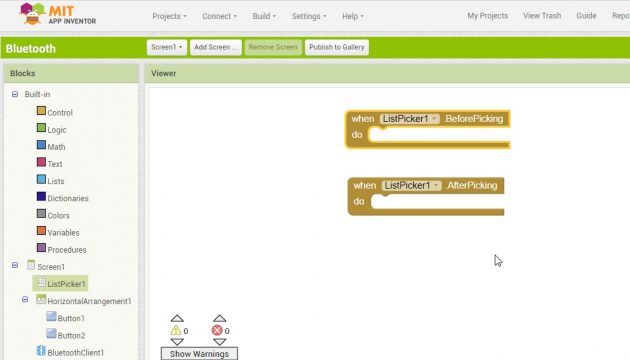 So the next thing in order to make the logic work is we have to go to the list picker element again and then we have to select your list picker 1 element. 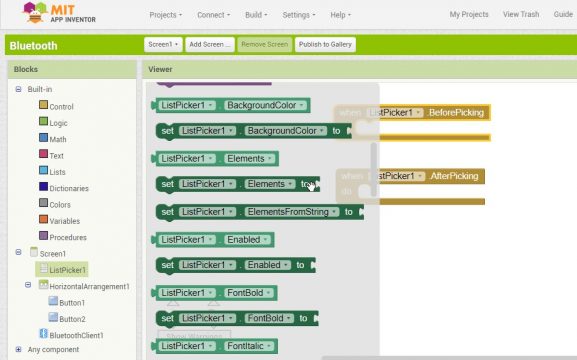 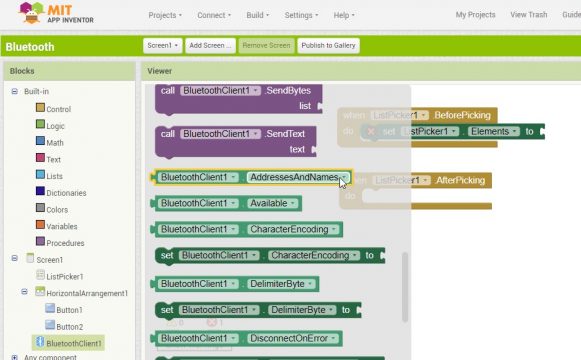 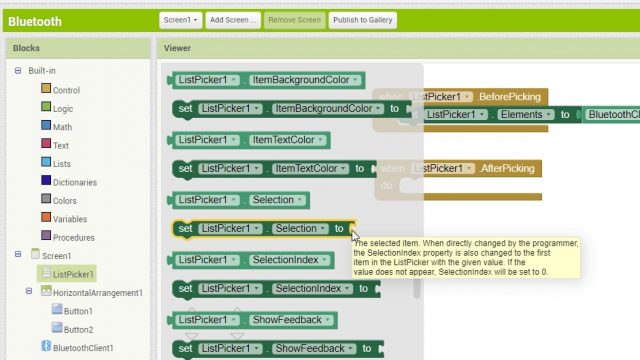 So this one we want because whenever we press the list then it will give us the list of Bluetooth connected Bluetooth clients which are paired with your mobile phone with this app is running basically so the next component is a list picker and then we have to select the list picker 1 selection element.

we just want to through the text so whenever you select the hc-05 bluetooth module then the button name has to be changed from LED bluetooth to say for example something like connected. 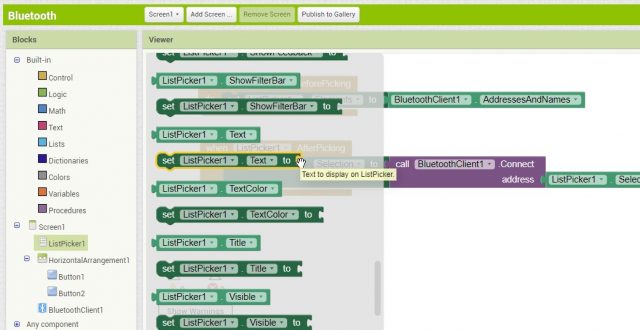 So whenever you select Bluetooth line then o it will change the text to be connected so once you place the button.

In order to connect to the Bluetooth Arduino Bluetooth when you press this button then it will  give you the list you select at zero five and then the name of this pattern will be changed as a connected so you then confirm that your mobile phone and the app is connected to your hc-05 Bluetooth module which is connected to other. We know then go back to the blog section and in a button I have to take button one and then we have to go to button two and take the button 2.

So here we have two buttons  and then we have to write a logic where when we placed the button then the button one will send the text to Arduino over  HC-05. I will send text element that we want to put here and then in the next section whenever somebody press the button one then it will send one so that turn on the LED connected to Arduino.

Then you can copy and paste by the way so I can just duplicate the element and put it here and I would just say zero.

Now to make this app work with your mobile phones now once the project is ready on a screen that we have to take our phone in order to transfer the mobile app from our MIT App Inventor to the mobile phone.

We can save the app in two one way is to save it to in computer and in other way we can scan the QR code and by scanning this QR code it will be downloaded in Mobile phone.

Now turn on the Bluetooth in the mobile phone and connect it to the module. Then open the app in the mobile and from where we can on and off the led. From all this, no doubt MIT App Inventor is any amazing platform for designing cell phone apps, but seriously I have been making apps for Arduino using the Android Studio, and I personally like Android Studio. Anyway, everyone has its own point of view. If you have any question regarding this article let me know in a comment.