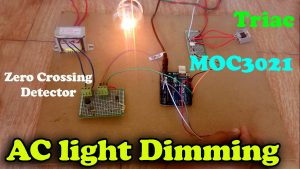 “MOC3021 light dimmer” In this Tutorial, you will learn how to make an Arduino-based 110/220vac Bulb dimming Control system using MOC3021, BTA16 Triac, and a zero-crossing detector circuit based on the EL817 optocoupler. The brightness can be controlled using the potentiometer. The Zero crossing detector circuit is designed in such a way that it provides complete isolation between the ac side and the controller side. So if any fault or short circuit happens on the ac side will have no effect on the controller side. In this tutorial, we will cover

This schematic is designed in cadsoft eagle 9.1.0 version. if you want to learn how to make a schematic and PCB then watch my tutorial.

The purpose of the bridge rectifier is to convert the ac into dc. Three 10k resistors are connected in series which makes the voltage divider circuit. With the help of these resistors, the voltage is reduced to 4volts. A 330-ohm resistor is connected in series with the IR led of the el817 Optocoupler….this is the el817 Optocoupler as you can see it has a total of four legs.

Dimming Circuit based on the MOC3021: 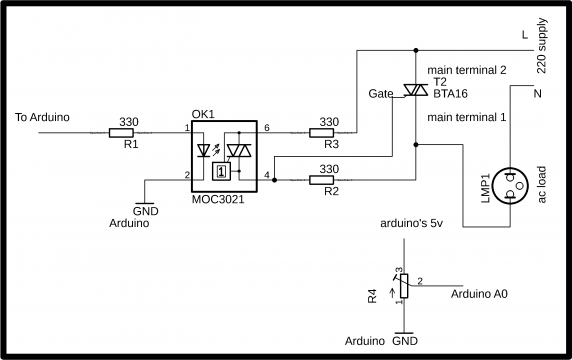 The ac bulb dimming circuit is based on the MOC3021opto-isolator Triac Driver and BTA16 triac. The moc3021 has actually total of 6 pins but pin number 3 and pin number 5 are not used.

this is the BTA16 triac lets have a look at its datasheet..as you can see it has three legs

First leg is the main terminal 1

2nd leg is the main terminal 2 while

3rd leg is the Gate.

The BTA16 triac can handle load upto 16A at 25C. for higher load large heat sink should be used…

For the step-by-step program explanation, watch the video Tutorial given at the end.