NVIDIA GeForce RTX 2070- Well, back in 2018 this GPU was considered to be the best GPU for gamers due to its high clock speeds and its price. When there was no GPU shortage, the popularity of this GPU was at its peak in the markets. So today I will review this GPU, and we will see how this GPU gets along with new games with ray tracing and with its high clock speeds. So stay tuned. 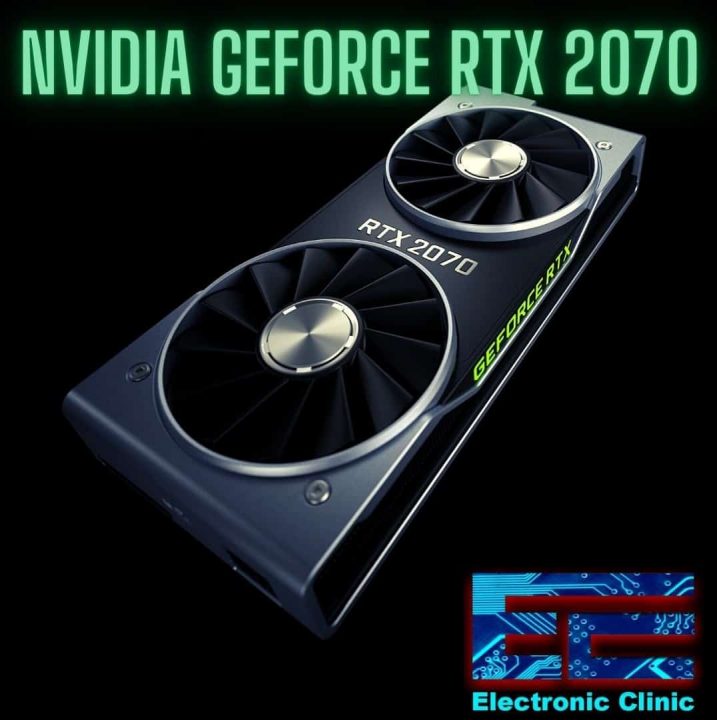 when we saw the price of this GPU back in 2018 we were quite shocked, because at $499 the performance of this GPU was massive compared to the GTX 1070. Plus the new Turing architecture was a big hit at that time. This GPU was a dream for most gamers, because of its compatibility with intel latest processors, the performance was enormous. The latest intel processors have the best clock speeds so combining that with this gpu clock speed, there was a huge performance increase. There are 10.8 billion transistors. This gpu was PCI-E gen 3, to eke out the best performance you will need at least a motherboard that is compatible with the PCI-E gen 3.

The base frequency of this GPU is 1410 MHz which is faster than most new GPUs. The Boost Clock is also faster than other GPUs at this point which is 1620 MHz. The base frequency is going to help in mostly GPU-bound games like Call of Duty Warzone. The boost clock is also helping in demanding games like Cyberpunk 2077, Assassin’s Creed, God of war, and the newly launched Eden Ring. The more the frequency is the faster the speed of the GPU will be.

The difference between the GTX 1070 and NVIDIA GeForce RTX 2070 is vary, you can see that NVIDIA GeForce RTX 2070 has 8 GB of GDDR6 memory with a frequency of 1750GHz. Which is really fast compared to its predecessors. The memory clock of this GPU is 14 GHz which is amazingly fast and don’t forget this GPU is also so power efficient. This GPU interface is 256-Bit which is not faster as the Nvidia Geforce RTX 3060. The memory bandwidth is a lot faster than its predecessor also. Like it’s faster than Nvidia Geforce GTX 1650 and Nvidia Geforce GTX 1060. The memory bandwidth is freaking 448 GB/s which is awesome.  The cache memories are also good in terms of performance. The L2 cache memory is 4MB which is impressive.

NVIDIA GeForce RTX 2070 has 2304 CUDA cores. The Cuda cores are more than Nvidia Geforce GTX 1070 and Nvidia Geforce GTX 1060. There are 64 ROPs that help in rotating, resizing, and scaling the image. There are also 288 Tensor Cores which will help in Ray tracing. Ray tracing is so much fun to play with I mean with the new latest games you can enjoy the full amazing lighting control, reflections, and so much more to play games with ray tracing on. There are also new features in this GPU like DLSS, what these features do is that new algorithms this upscale your game’s resolutions to make it more crisp and sharp. There are also 36 RT cores. There are 144 texture units.

This GPU’s maximum power consumption is 175W compared to its predecessor’s 200W. This GPU is faster than the Nvidia Geforce GTX 1650 and power efficient too. Because this NVIDIA GeForce RTX 2070 power consumption is 175W. This allows the users to get more out of the GPU. There are also many variants of this GPU that can be further overclocked thus eating more power. The power limit of this GPU is around 195W which is a lot to get faster performance when it’s overclocked. You can get 10-15% more FPS when it’s overclocked but I would not recommend that, if you don’t know about overclocking.

The max monitor support increases with the increase of new technologies and with new updates from monitors, TVs, etc. the GPU’s updates as well. This GPU can support maximum display at 8K with up to 4 monitors. There are vainest with different display outputs. But you will find more than 4 display connectors. There are some variants with thunderbolt displays at well. But there will be 2 display ports 1.4 and 2 HDMI 2.0b connectors. The display port can support 8K at 120Hz which is amazing. Because there will be no lags, no delays with this new DP version. There is no 8K support on HDMI. Well because the bandwidth of the HDMI is far less than the bandwidth of DP. If you have a monitor that supports 4k 144Hz or a monitor that supports 240Hz then I will recommend using the DP. Because of its bandwidth.

This pixel fill rate of This GPU has scored 103.68 Gigapixels/s which is amazingly fast compared to its predecessors. The texture fill rate also scores 233.28 GTexel/s. That’s why it supports 8K at high frame rates thanks to ROP’s. Now let’s talk about the texture fill rate. Texture fillrate measure how many texels can a GPU render per second. Texture fill rate is always measured in the amount of me like (1s). Texels are basically is three-dimensional space objects and called textured pixels.

Well, one of the most important and key factors about this GPU is its power consumption. This GPU is not that power-hungry. This GPU needs a 1x 8-pin connector. There are also 2 display ports and 1 HDMI port, which is really great for multiple monitors. There is also Audio input from HDMI which also helps with these new monitors.

These days the size of the GPU is also important because there are a lot of cases that don’t fit some long GPUs. This GPU is 9 inches which can fit in most PC cases. Plus the GPU is also dual-slot which helps in heat overflow. There are some variants of this GPU who’s offering single slot GPU with a small form factor.

The gaming experience of this GPU is on another level. NVIDIA GeForce RTX 2070 has the fastest memories, fast clock speeds, faster memory clock speeds, more Cuda cores, the newest architecture, and higher bandwidth. Which makes the gaming experience more powerful. The more the Cuda cores the faster the performance of a GPU will be. So this GPU is like on steroids when it comes to the Cuda cores. Running GTA 5 on this GPU will give you around 120+ FPS. And in almost every game this GPU shows the best performance.

So, this was my full review of the NVIDIA GeForce RTX 2070 if you want to check out more articles like this then check the reviews in the menu. Also, do check out my YouTube channel. Thanks.