Reluctance is nothing but a resistance of the magnetic circuit means we can simply say that the reluctance is the property of magnetic material which supports the flow of flux on the principle of variable reluctance because in it reluctance varies due to the air gap. This means the rotor always try to align along the lowest reluctance path as the name suggests a switch or switching inverter is required for the operation of switched reluctance mode. So this is the definition of switch release motor. 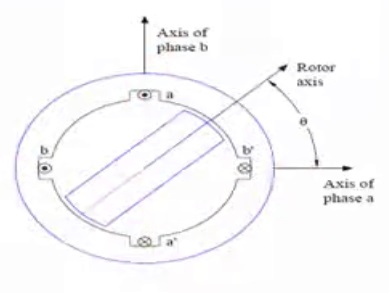 No winding is placed in the rotor. It should be noted that in actual switch reluctance motor the number of phase winding on stator may be more than two. Since the rotor is of salient construction. 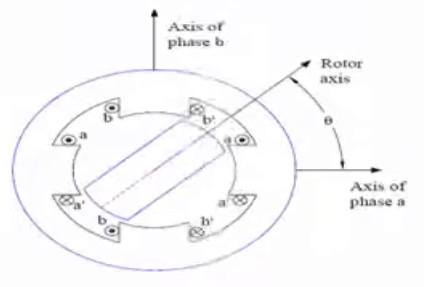 When stator phase winding is de-energized and the winding b is energized the rotor aligned itself along b phase as shown in a figure. This is the figure 2.

In switched reluctance motor torque is developed by the variation of the reluctance or permeance of air gap.

Derivation of the torque produced:

An axial field is further classified into two category:

So these are the classification of switched reluctance motor.

The next topic is advantages and disadvantages of switched reluctance motor. So the advantages of SRM is it does not require an external ventilation system as the stator and rotor slot projected or we can say that construction the airflow maintained between the slots amino the rotor does not have winding since therefore no need to keep the carbon brushes and the slip ring assembly since the absence of permanent magnet. Such motors are available at cheaper price. Simple three or two phase pulse generators is enough to drive the motor. The direction of the motor can be reversed by changing the phase sequence. Self-starting and does not require external arrangement. Starting torque can be very high without excessive in rush current. It has also high fault tolerance. Switch reluctance motor the phase losses do not affect the motor operation provide high torque and inertia ratio. High starting torque can be achieved in case of SRM.

Next is the disadvantages of switch reluctance motor create torque ripple at high speed operation. The external rotor position sensor is required external rotor position sensors positions. So we can say that the noise level is high at the higher speed the motor generate harmonics to reduce this we need to install large size of capacitors. Since the absence of permanent magnet the motor has to design to carry high input current it increases the converter KVA requirement.

Now the next is an application of SRM so it is used for demonstrating applications or domestic appliances such as: