The water of the oceans of the world is almost always in motion hardly interrupted ever, waves break at the coast line sometimes stronger sometime weaker. There is enormous potential that is available around the clock and free of charge. The tidal power plant is developing technologies to convert the inexhaustible energy into electric power without any emission of harmful greenhouse gases.

Tidal power is form of hydropower that converts the energy from natural rise and falls of the tides in the electricity. Tidal energy is a source of renewable energy which is used for the generation of electricity. This is very ancient technology like wind energy. Tides are caused by the combined effects of gravitational forces exerted by the moon, sun and rotation of the earth. The movement of tides generate electricity. Tidal power plants can only be installed along the coastlines. Coastlines often experience high tides and low tides on daily basis. The difference in water level must be at least five meters high so to produce electricity.

The power of the ocean and the turbine advance technology guarantee and much more predictable energy output than other renewable resources. The twin 16 meters rotor on horizontal axis to capture kinetic flow. The 180 degree pitch control is used to generate power from flood and ebb tide providing a predictable run time up to 20 hours per day. The turbines are permanently connected to the power grid and produce 1.2 MW clean energy. 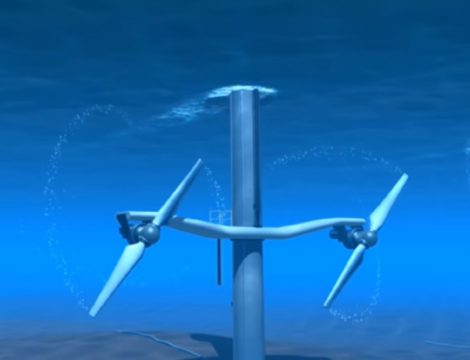 Ocean tide is basically raise and fall of water occurred twice in each lunar day. It occurs due to gravitational force of moon and sun on ocean water and is affected by spinning of earth around its axis and the relative position of earth moon and sun.

The difference in the level of ocean water between high tide and low tide results in the ocean tidal energy.

The gravity of the moon which interacts with earth will generate the tide. So basically this is moon power. During high tide in the ocean the level of water increases with reference to the low tide level. The tidal energy is basically the difference of the potential energy of high tide and low tide. Tidal energy is predictable it can give us energy for long time. The renewable energy is energy that is replenished by nature so that it can be used over and over again. The rise and fall of tides in the surge of ocean waves produced electricity. Tidal range is the dam difference that uses the difference in sea level between high and low tides. The turbine converts the potential energy into electricity just like a conventional hydropower plant.

We can harness some of this vast energy from the changing tides and tidal currents. The gravity of the moon, sun and earth combine to move the tide in and out. The tides change at predictable times linked to the cycle of the moon. In some part of the world the speed and the difference in in height of the tides is greater because of the local geography and the earth tilt.

Global warming becoming a greater concern it is our job to find alternative ways to provide energy that are more available and sustainable than fossil fuels.

Tidal electricity can be created from several technologies the ones are:

Tidal barrages are the most efficient tidal energy sources tidal plants can only be install along coast line. A tidal barrage is a dam which by changing the high and low tide height generates potential energy. This energy generate electricity by turning a turbine.

Tidal currents are a device that captures the kinetic energy from the flow of the current to convert energy. Tidal turbines can be mounted on structures fixed to the seabed or on floating platforms. Tidal power is very attractive energy because it is same dependable till two low tide and two high tide.

Tidal fences are turbines that operate like giant turnstiles whereas tidal turbines are similar to wind turbine only under water in both cases electricity is generated when the mechanical energy of the tidal currents turns turbine connected to a generator. The generator produces electricity; ocean currents generate relatively more energy than air current because ocean water 832 times more denser than air and therefore applies greater force on the turbines.

Tidal power is easy to install and renewable having no direct greenhouse gas emissions and a low environmental impact because the ocean tidal patterns are well understood. Tidal energy is very predictable energy source make it highly attractive for electrical grid management. This sets apart from other renewables that can be more unpredictable. However adoption of tidal technologies has been slow and so far the amount of power generated using tidal power plants is very small. Tidal cycles do not always match the daily consumption of electricity and therefore do not provide sufficient capacity to satisfy the demand.

Generation of electricity from tidal energy:

The electricity is generated by using tidal energy. A dam is constructed in such way that a basin gets separated from the sea and a difference in the water level is obtained between the basin and sea. The constructed basin is filled during high tide and emptied during low tide passing through the tunnel called sluice and turbine is mounted on that passage. So during the high tide the water level rises and as the basin is separated from the sea and there is only one passage kept between sea and basin flow the water that is called sluice. So as soon as the wall of the sluice is opened. The water starts to flow from sea to basin because of the potential head and as the turbine is mounted in between this passage. It gets rotated and mechanically energy is generated here. This mechanical energy it is making a rotary mechanical energy. It is converted into electrical energy with the info coupling electric AC generator to the turbine.

The potential energy of the water stored in the basin is used to drive the turbine which in turns generates electricity as it directly coupled with generator.

Now based upon the basic used it can be classified as: 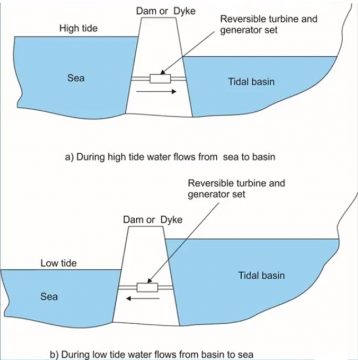 When the incoming tide sea level and tidal basin level are equal the turbine conduct is closed then the sea level rises and about how we high the turbine walls are opened and the sea water flows into the basin through the turbine runner generating power. This also rises the level of water in the basin the turbine will continuous to generate power until the tide passes through its high point and begins to drop. The water head than quickly diminishes till it is not enough supply to no load losses bypass wall than quickly opens to let water into basin to gain maximum water level. When the sea and basin water level are again equal the walls are closed as well as the turbine conduit. The basin level then stay constant while the tide continues to go out after sufficient has developed during the low tide. The turbine walls are again opened and water now flows from basin to sea there by generating again power. The plant continues to generate power till the tide reaches its lowest level and again during the high tide water flows from the sea to tidal basin there by generating power. So this cycle it goes on continuous during each  tide. In this way the power generation it is done intermittently during the high tide or during the low tide.

The main drawback of the single basin tidal power plant is that it cannot generate power continuously.

In double basin power plant it can provide power continuously or on demand. It consists of two basins called upper and lower basin. One basin is maintained always at a lower level than other. So this lower basin it is always maintained at a lower level than the upper basin. A dam is constructed between sea and basins as well as between basins. A power house is mounted in between the dam constructed between the upper basin and lower basin. Power house means the equipment which is used to generate power or electricity. The lower level reservoir empties at low tide, the upper reservoir replenish at high tide. So during the low tide the lower basin it gets emptied and during the high tide. The upper basin is replenished. 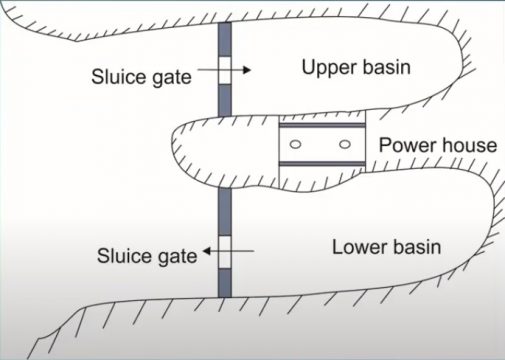 When there is ocean there tidal force the incoming and outgoing tidal effect occurs at different time along coastline. This means there is always a time where the tidal force is active. The gravitational force of the sun and moon regulate the earth tidal flows like clockwork. Tides are powerful, dependable and predictable in years in advance while tidal height may vary its lateral force may remain a consistent source of power harnessing the immense of power of the world oceans and rivers. The sea urchin is a third generation tidal technology addresses the key issues associated with power generation. The sea urchin turbine is easily transported in flat pack form. The sea urchin system more compact to transport than wind turbine and it is quick and easy to assemble. It is also easily transportable on both land and sea. Submerged tidal generators are not visible from the shore line. The tugboat proceed to the location marked by the locator. The sea urchin turbine produce reliable base load or predictable power while turning gently at just 25 revolutions per minute driven by tidal or continuous flows. As the tide changes the sea urchin gently swings to align with the tidal flow. The unique method of transform ensures the sea urchin swivel in control manner without twisting the electrical cable. 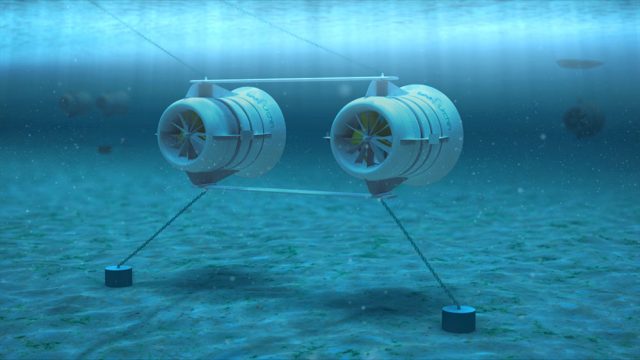 Benefits of the sea urchin: