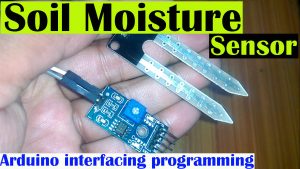 In this tutorial, you will learn how to use a soil moisture sensor with Arduino. A soil moisture sensor has many applications, especially in agriculture. Before I use this sensor in some intermediate and advanced level projects, first I decided to make a very basic getting started tutorial to explain the basic connections and programming. This tutorial covers

Recently, I added an advanced level project based on Irrigation. In this project I used the Capacitive Soil moisture with the Nodemcu ESP8266 along with the Lora Transceiver modules by the Reyax technologies. This is really an amazing project, which I designed for one of my customers. 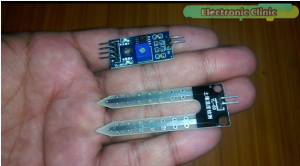 A soil moisture sensor actually consists of two components, the board and the part having these legs.

This is component number1 provided with 2 male headers, with the help of these two male headers it can be interfaced with the blue board using the Female to Female type jumper wires, or if you want solid connections, you can solder these pins. 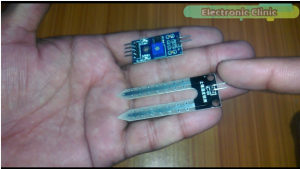 And this is component number 2. 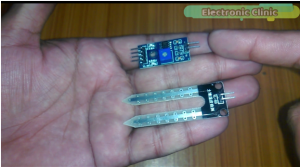 Component number 1 is basically a two-legged lead, that goes into the soil, as you can see this component has two male headers which connect to the component number 2 which is an amplifier/ Analog to digital converter circuit. 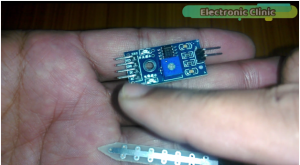 This circuit is connected with the Arduino using these 4 male headers. These 4 male headers are labeled with Vcc. Ground….D0 and A0. D is for the digital while A is for the analog. So it means we can get values in both Digital and Analog. The digital output is in the form of 0 or 1which can be controlled using this potentiometer.

This module has also two led’s, one led is the power ON led, while the other led works with the digital output pin. When the moisture is below a certain value which is set using the potentiometer then led remains off. When there is moisture, this led turns ON.  While the analog output can be any number between 0 and 1024. This value will entirely depend on the water content present in the soil. So now we can say that the soil moisture sensor has two modes

First of all, let’s cover the analog Mode. 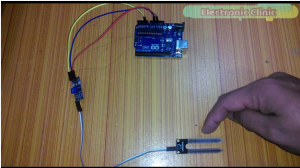 Then using two if the conditions we can turn on and turn off the led. When the sensor value is greater than 500 and the flag is false then turn on the led, which means that it needs water. And then change the flag status to true and use a delay of 1 second as 1000 milliseconds are equal to 1 second.

If the value is less then 300 then simply turn off the led. And change the flag status back to false. 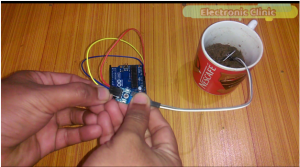 Now simply remove the yellow wire and connect it with the digital output pin and connect the other end with digital pin 4 of the Arduino.