Energy meter are used for the measurement of energy and the energy is measured by measuring the power over a period of time.  Energy meters are also known as watt hour meter.

The unit of power is watt and for time we used hour. So the unit for energy is watt hour. The energy meter measures the amount of power consumed by the electrical product.

Energy meters are used in homes and in industrial application where we want to found that how much energy are being consumed by the home appliances and electrical equipment. When we are using energy meters for heavy load then we have to use some protection because when heavy current is passing through the energy meters they can be damaged whereas for low currents they can be directly connected with the instrument means with the appliance whose energy we want to measures.

Single phase energy meter is used for home appliances. The single phase energy meter is directly connected between the line and load. It consists of two electromagnets one is the shunt magnet and other is the series magnet and in between these two magnets we are having the aluminium disk. So this aluminium disk is rotating in the magnetic field. The speed of this disk is proportional to the part which is consumed by the appliance. Read my article on the Electrical House wiring, in this article you will learn how energy meter is connected, and also explains the complete house wiring. 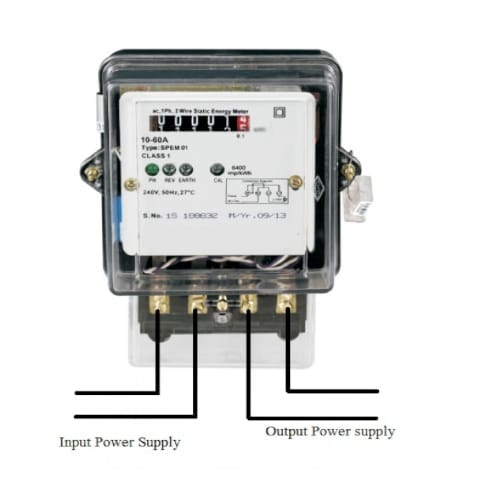 Three phase energy meters are used for the power above the 10KW power. This meter is also called poly phase meters. This means it can be used to record energy consumption for more than one phase simultaneously. The same parameters are present in the three phase meters which are present in the single phase energy meter. There a few differences and changes in usage in the three phase meter. The three phase meter also records consumption in kVAH and kVArH. With this we are able to check on the meter how much load the consumer has actually used on the site and how much power factor has been used. There are advanced types of three phase meter which has advanced features like it is tamper proof, it has such features that if someone tries to remove the top cover and it gets opened, there is immediate display showing a cover open symbol along with the data and time stamping. If meter is immune from any magnetic influence and radio frequency influence or even if anyone try to used electrostatic discharge the meter will display the tampering done. 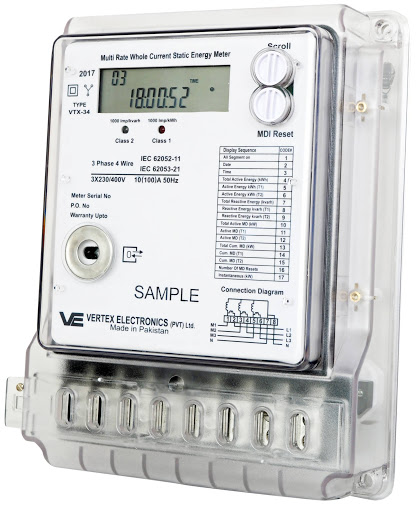 In the three phase meter there are 8 terminals to meet the 3 phase 4 wire distribution system requirement. The eight terminals are in arranged in such way that four wires incoming in which three are phase wires and one is neutral wire

How the readings of energy meter slow down?

The disc in the meter revolves due to the magnetic field built by the current passing through the current coil and the pressure coil. This disc is attached to the spindle and the spindle in turn is attached to the counter. The counter works due the revolutions of the disc. It is necessary that the spindle remains fixed and stays vertically at 90 degrees angles. If we try to tilt or twist the meter it will reduce the speed of revolution of the disc. This will lead to suspicions that the meter can be slow down by tilting or twisting it. The meter reading could thus be suspect it will not giving correct reading. Also mechanical part such as the spindle deteriorates over time. The meter reading can also slow down because of this.

The energy meter measures the instantaneous power as we know that power is the product of voltage and current.

Types of energy meter on basis of display:

There are two types of energy meters on the basis of display.

The input side of the digital energy meter is represented by L1, L2, L3 and N. L1, L2 and L3 are attenuated through potential divider in the voltage sensor block. While the line currents are measured through shunt resistance in the current sensor block. We are getting analogue output from the voltage and current sensor block. This analogue output is converted into digital data through adc that is analogue to digital converter in four quadrant metrology processor. This is also feedback to the terminal block making the energy meter transparent for the installation. The metrology processor perform four quadrant multiplication to determine the amount of active power consumed as well as the amount of reactive power loading domain. These calculated resulted are forwarded to system controller which besides display and memory management controls the data transmission between energy meter and central data collection point. This transmission is done through RS-485 interface. This interface can be design for half duplex or full duplex. In half duplex we can send data in both direction but one at a time, while in full duplex we can send data in both directions at the same time. The example of half duplex is wireless while the example of full duplex is telephone. 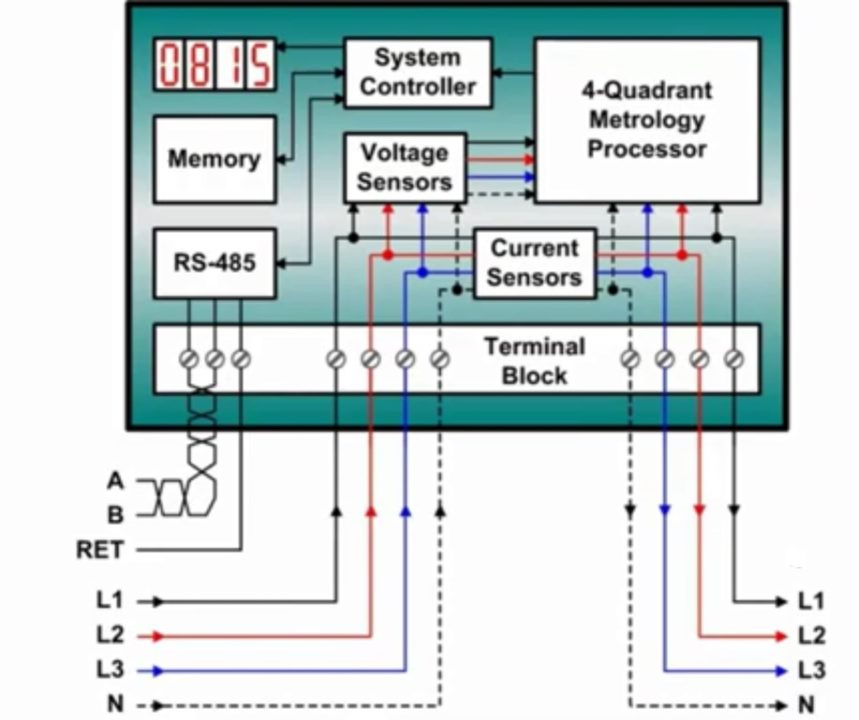 Types of energy meters on the basis of application:

Different type of energy meters are used on the basis of its application such as:

This is the oldest type of energy meters and it consists of rotating aluminium disc which is rotating in the magnetic field of a permanent magnet.

It consists of the following components: 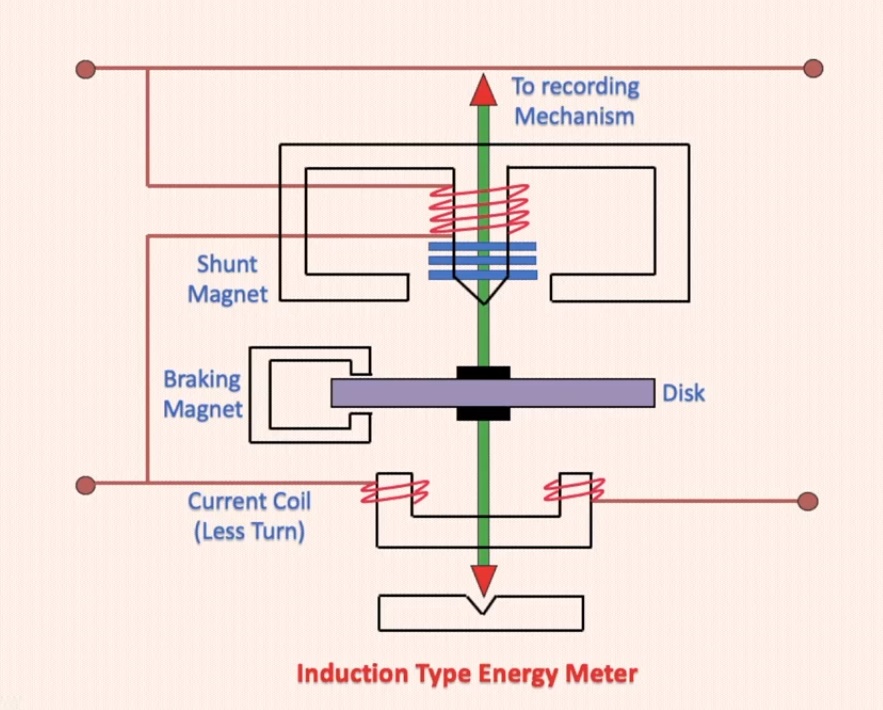 Two coils are wound on the series magnet and this coil is called current coil and this coil has very few numbers of turns. It is called series magnet because it is connected in series with the line. Whereas on the shunt magnet we have pressure coil and this pressure coil has many number of turns as compared to the current coil. It called shunt magnet because it is connected in parallel with the line. Other than these two magnets we have a break magnet which is permanent magnet which applies a force opposite to normal disc rotation to move the disk at balance position. When no power is applied to the circuit the disk should not be rotating so this break magnet is going to bring the disc back to its normal position or balance position. When current is flowing in these pressure coils and the current coil, the current is load current which is proportional to the load flowing through the pressure coils. So due to the current flowing in these magnets there will be a magnetic field and due to magnetic field emf will be generated and this emf is going to rotate the aluminium disk with this disk a pointer is attached. We will take the reading with the help of this pointer which is moving over a scale. Series magnet produces flux which is proportional to the current. Shunt magnet also produce flux which is proportional to the voltage. As for power we require current and voltage. Now these two fluxes are 90 degree in there will be phase difference the flux which will be 90 degree because here we are having the inductive flux due to the inductive nature voltage and current there will be a lagging relationship between them. Now due to interaction of these two fluxes there will be an eddy current generated and this eddy current is going to generate a force which moves the disc. This disc is connected with the vertical spindle or shaft. So as this disc moves and to the disc vertical shaft is connected this shaft is also going to move and to the shaft a pointer is attached. So the pointer over the scale and this scale provides the reading of the power. These types of energy meters are sample in construction and they are accurate. But some time there  accuracy is less due to the creeping action of the aluminium disk because due to the creeping and friction  is also there so if there is external field present. It will affect the reading of the energy meters. It is commonly used in the domestic and industrial applications.

These energy meters are very highly accurate, precise and reliable as compared to the induction type of energy meters. It consumes less power and starts measuring instantaneously when connected to the load. These can be of two type’s digital and analogue energy meter. In analogue meters the power is converted to frequency. In digital meter power is measure directly. Electronic meters have an LCD display and the reading is clearly visible due to the back lit screen. We can view the date time and the mdi reading in this meter. Electronic meters have many advantages over the electromechanical meters. Electronic meters show the connected load as well as the current passing through the meters along with the current MDI. These meters also save the MDI for the previous 4 months. Ac static watt hour meter means that no component of this meter is revolving

Single phase electronic meters are used for loads up to 1KW to 10KW. To use the new energy meter first check that it has no breakages and scratches. The electronic meters have two seals one seal is put by the company manufacturing the meter while the other seal is put by the distribution company. Along with meter, a meter report is also provided by the supplier company.

These energy meters involve some intelligence system through that system we are measuring the power that how much power is to be consumed by the appliance and what is the maximum level, minimum level, all is set by that intelligence system so that is why they are smart energy meters. It measures energy remotely, switches the supply to the customer and remotely control the maximum consumption.

How to check reading in the energy meter:

In energy meters we usually see that red colour led are blinking which shows us that the load is connected when it blinks fast it shows us that connected  load is maximum and the led will blink slowly when the connected load is minimum. When this led blink 3200 times then the one unit is complete. Similarly in disc type of energy meter when the disc revolves 600 times then the one unit is complete. In Pakistan usually the digital energy meters are used which consist of four types of LEDs.

This led will which will show us that the energy meter is power on.

This led will blinks when the load is connected. In some meters this value is change depending upon on their programing.

In every digital energy meter there are five types of readings. The sequence of the reading is usually give on the meter.

First the energy meter will display the serial number

Then the total units of the meter will be displayed

In this previous month power will be displayed

Then the current month max power will be displayed

This will show the current power of the load connected