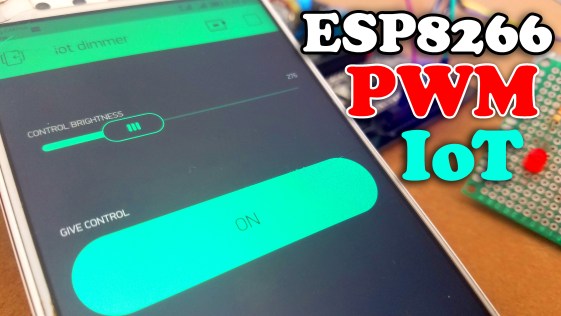 ESP8266 PWM based LED dimmer using IoT– This is a basic getting started tutorial in which you will learn how to use the PWM “Pulse width Modulation” using Nodemcu ESP8266 Wifi Module to control the LED brightness using the Blynk application and a variable resistor or Potentiometer. For the demonstration purposes, I am using an LED that is connected with one of the PWM pins of Nodemcu ESP8266 Wifi Module, but if you want you can also connect a DC motor. The LED brightness can be controlled using a slider from anywhere around the world as this small project is based on IoT technology.

This tutorial can be easily modified, you can replace the LED with a dc motor and motor driver, this way you will be able to control the speed of a DC motor or you can replace the LED with a Solid State relay and control the brightness of a 110/220Vac light bulb. This project can be used in so many advanced level projects. This is totally up to you how you are going to modify this?

Note: For the practical demonstration and step by step explanation watch video given at the end of this article.

Just like the Arduino Uno, Nodemcu ESP8266 Wifi Module also has the PWM pins. The digital pins D0 to D10 can also be used as the PWM pins which you can confirm by opening the Blynk application. You can use any of these pins. 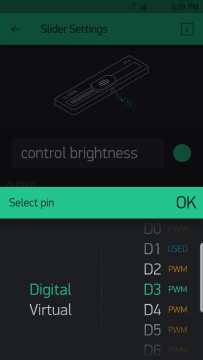 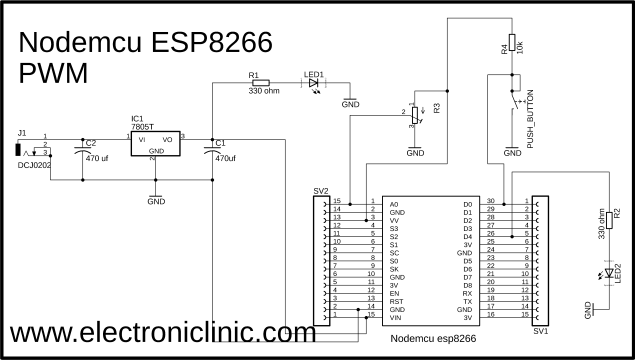 Finally, I connected everything as per the circuit diagram. Now let’s make the Blynk application, follow the same exact steps. 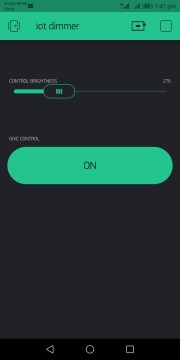 Before you start the programming, first of all, make sure you download all the necessary libraries by clicking the download button given below.

This is the authentication code which was sent via email while making the blynk application. I simply copied the code and paste it over here.

then I defined a software based timer.

I defined a pin for the LED, which is the gpio pin 2 and is the PWM pin. I selected the pin name as the SolidState_Relay because later I will use the same project for controlling the brightness of a 110/220Vac light bulb using a solid-state relay.

A pushbutton is connected with the digital pin D0.

then I defined variables for implementing the timer. So that I can count the seconds.

the potentiometer or variable resistor is connected with the analog pin A0 of the Nodemcu ESP8266 Wifi Module.

int Vresistor = A0; // to control the brightness manually

The value coming from the potentiometer is stored in the variable VRvalue.

int VRvalue; // the variable resistor value is stored in VRvalue.

Inside the void setup() function, first of all, I activated the serial communication using the serial.begin() function and selected 115200 as the baud rate. I will only use this for the debugging purposes. Then I activated the Blynk using the blynk.begin() function which takes three arguments as the input, the authorization token code, the Wifi router name and the password. Then using the pinMode() function I set the pushbutton and variable resistor as the input while the solidstate_relay which is the PWM pin is set as the output. The ReadVR and ReadButton are the user defined functions and are executed after every 1 second. These functions are used to read the variable resistor and to check if the pushbutton is pressed or not.

Inside the void loop function, I am only using two functions which are the timer.run() and Blynk.run() functions.


As I said earlier, ReadVR() function is a user defined function. It has no return type and does not take any argument as the input. The purpose of this function is to read the variable resistor and then control the LED brightness.

This condition means if the button on the blynk app is turned off then read the variable resistor using the analogRead() function and store the value in variable VRvalue.

The following if condition means if the value is less than 5 then assign a value of 0 to the VRvalue variable.

Now for implementing the PWM “Pulse Width Modulation” we use the analogWrite() function.

ReadButton() function is a user defined function, it has no return type and does not take any arguments as the input.

This if condition means if the button is not pressed then makes seconds equal to 0.

This if condition means if the button is pressed and start counting the seconds. if the seconds are greater than or equal to 2 then simply turn ON and turn OFF the LED depending on its current state.

In the end, I uploaded the code and start testing the project. 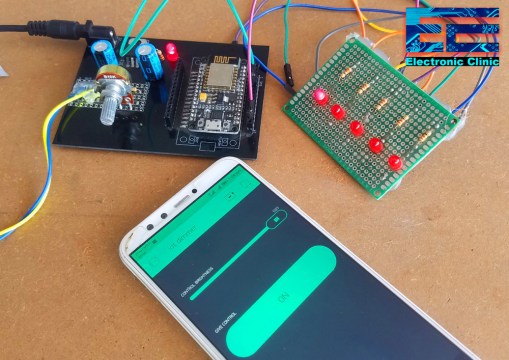 I successfully controlled the LED brightness using the on-screen slider button and the potentiometer. For the practical demonstration watch video given below.