Earthing means establishing an electric link of metal parts of electrical appliances with the earth. A system wherein exterior metal sheaths of electric appliances or electrical machines are connected with ground or earth through a thick wire (which has almost zero resistance) in such a fashion that in case of fault or leakage, immediate and safe discharge of electric energy can be ensured anytime, is known as earthing system. In other words, connecting metal components or exterior sheaths of electrical machines and other appliances through a wire, which has negligible resistance, with specific parts of the earth, is called earthing system.

Earthing or earthing system can also be defined as follows;

Connecting metal components of machinery and appliances with an earth plate or earth electrode, buried in moisturized earth (ground) through a thick conductor, is called earthing.

As the body or metal sheath potential of electrical appliances turns out to be zero (as earth potential for all practical purposes is treated zero), therefore any person or operator, who intentionally or unintentionally touches it, does not go through an electric shock. Metal conduits, outer casings of the lead-covered wiring system, electric iron, table lamps, electric heater, and other household appliances connected with a metal tube, generators, motors, and metal frames of all other machines must essentially be earthed. Earthing system does not mean that an earth lead must just be touching the earth or installed above the earth, rather earthing means that earthing of all installations be done in such a manner that earth lead has permanently been fixed along wet part of the earth and leakage current could discharge towards the earth without any sort of danger or damage.

In Pakistan, all types of electric appliances (e.g., motors, generators, transformers, machinery wherein electrical power is employed, appliances which control and regulate electrical energy, and all medium voltage appliances) are advised to be earthed from at least two separate places. In this way, all installations can have a better safety arrangement.

If the outer sheaths of all the electric appliances are completely insulated (that’s they are manufactured from insulated type material), there is no need for any sort of earthing on it, because current cannot pass through as a result of accidentally touching phase wire. As it is very expensive to fabricate insulated sheaths for electrical appliances, therefore metal sheaths are normally brought into use. By using metal, we mean that in case of any sort of defect or fault, if a phase wire touches a metal segment, current will be transmitted on the metal and the person touching the metal portion will suffer a severe electric shock, which can prove fatal to human life. Thus, to avoid electric shocks, metal parts of electric appliances must be earthed as a precaution. As such, earthing System is done for the following reasons;

(i). In order to protect human life and appliances against the danger of a leakage current

(ii). In order to keep voltage stable in a healthy phase in case of a fault or defect in another phase

(iii). In order to protect and safeguard appliances and buildings against thunder

(iv). In order to perform services as a return conductor in communication and traction works

The insulation of electrical wires being used in electrical machines and appliances normally gets tattered as a result of moisture, heat, or abrasion. Therefore, some part of the current shifts onto metal sheaths instead of passing through its original path (i.e., through wires). This type of current is called leakage current. In such a situation, if hands or any other part of a person or operator’s body touch that metal sheath, the leakage current will pass through the body of that person and enter into earth. As such, a severe electric shock will be felt by that person as a result of the completion of the circuit or flow path of an electric current, which can prove deadly. Thus, the importance of the earth cannot be denied for safeguarding human life against electric shocks.

If metal sheaths of electric appliances are properly earthed, then there remains no danger to human life in case of a leakage current resulting from any sort of a fault, because leakage current completes its circuit to earth through the earth wire connected with metal sheaths of the appliances. As overall resistance of a protective system is very low, therefore as a result of the flow of excessive fault current through the circuit, safety gadgets (e.g., fuse, circuit breakers) come into operation and disconnect the electric appliances from the supply of faulty circuit (i.e., disconnect electrical appliances with supply). As such, the risk of a fire breaking out or an electric shock to a person or operator working on these machines, accidentally touching it, eliminates. To achieve this very objective, electric appliances and installations are earthed.

A complete system of earthing can be distributed into the following three segments;

In figure 1.8, these different components of an earthing system have been illustrated. A detailed description of the aforementioned components is as follows;

Figure 1.8 – components of an earthing system 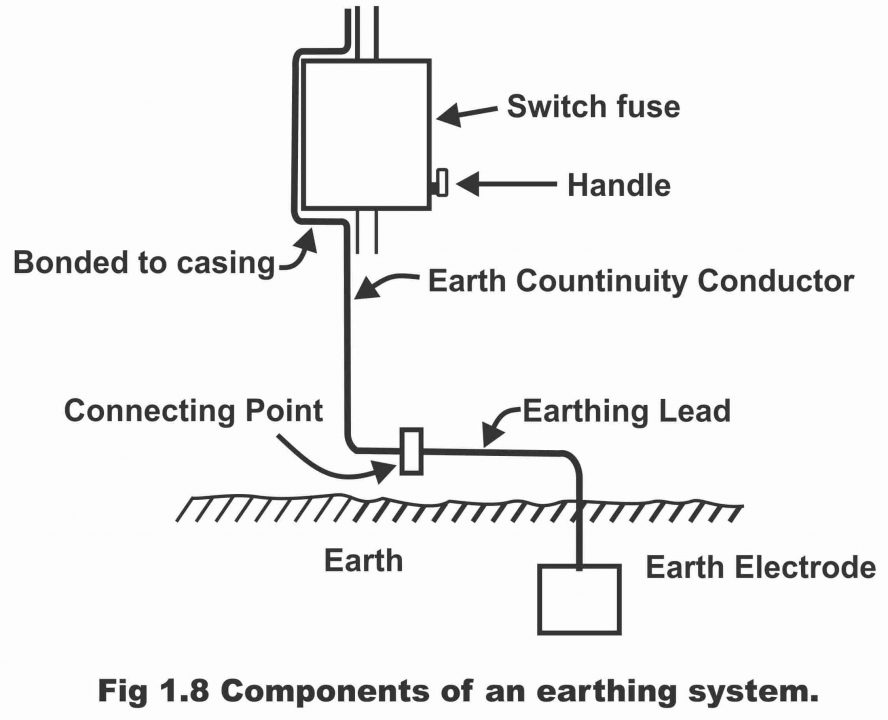 That component of an earthing system, which connects all metal parts (e.g., conduits, ducts, boxes, metal sheaths for switches, switch fuses, distribution boards, regulating and controlling equipment, metal sheaths of machines, and any metal framework on which electrical appliances are fixed) and ultimately connects them with the earthing lead, is called earth continuity conductor. In other words, an earth continuity conductor is a wire or strip through which metal sheaths of electrical appliances are connected and finally linked with the earthing lead. It is actually a brass wire, which connects specific parts of electrical appliances with an underground buried earth electrode via the earth lead. In figure 1.8, an earth continuity conductor has been illustrated.

Normally, bare copper wire is driven inside the conduit for applying it as an earth continuity conductor. However, for keeping a vigilant eye on the earth wire, it can also be run along a conduit openly. In figure 1.9, the earth continuity conductor has been illustrated driven both inside and outside the conduit. If earth wire has been run outside the conduit, in such a situation it should be affixed or installed along pipes or conduits through conduit clips in a beautiful and fortified manner.

Figure 1.9 – outside and alongside conduit, or inside the conduit with the current-carrying cables 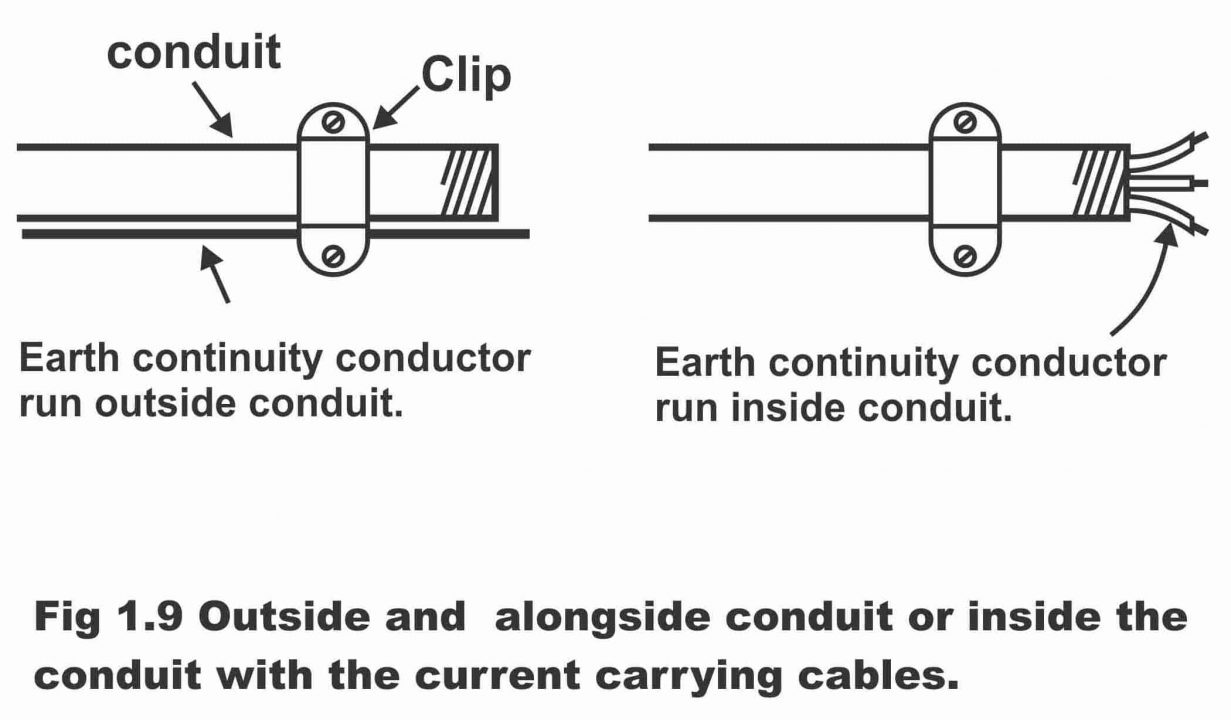 A wire which connects the earth continuity conductor with the earth plate or electrode is known as earthing lead and the point where the earth continuity conductor and earthing electrode unite together is called connecting or union point. These points are made at such safe places for the sake of testing, where they could easily be accessed. The conductors of earthing lead are also brass made and they individually have the capability to let the entire fault current pass through it. Every earth electrode has two accompanying earth leads. In figure 1.8, earthing lead and a connecting point have been illustrated. Earthing lead is normally short in size and straight as far as possible.

Earth lead is normally passed through a G-1 type or galvanized iron pipe and driven up to the electrode buried into the earth. Zinc pipe protects the earth’s lead against rust and mechanical shocks. And at times of need, water can also be supplied to the plate or electrode through this pipe, so that artificial moisture surrounding the plate remains intact.

Motors, generators, transformers, etc. should be earthed with the earth plate from two separate spots. The correct method which can be applied is that two earth plates have to be installed under the water level and as far as possible, both the plates should be kept apart from each other. If the water level is quite deep, it is not necessary to carry the earth plate up to the water level. In such a situation, two or more than two secondary plates are buried in the earth after a 10 feet excavation. The existence of moisture around the plate is essential. To ensure it, water is regularly poured onto it through an external pipe. To preserve moisture, a thick layer of ground wooden coal and lime mixture is built around the vertically buried plate. 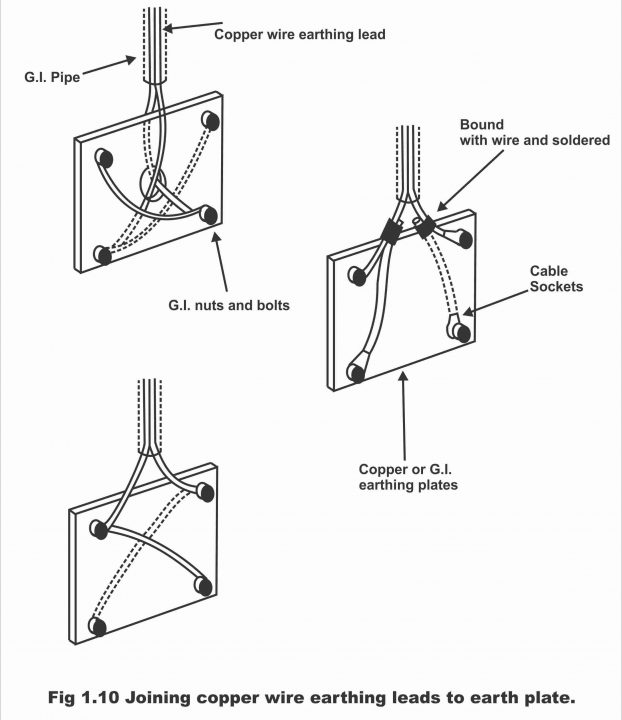 As per electrical rules, all-electric machines (e.g., motors, generators and transformers, etc.) must be required to be earthed from two separate places. The advantage of such a practice is that if a wire breaks down or ruptures due to some shock or rust, other earth continues to work as usual so that no accident takes place. In this way, the entire installation has better and more comprehensive protection. In the double earthing method, both earth wires are not joined with a single earth plate, rather every wire is connected with a separate earth plate. The mutual distance between both these plates should be between 5 feet to 8 feet. In figure 1.11, a motor has been shown to have been earthed in two separate places.

Next Topic: Earthing System for home: Plate and Pipe Earthing