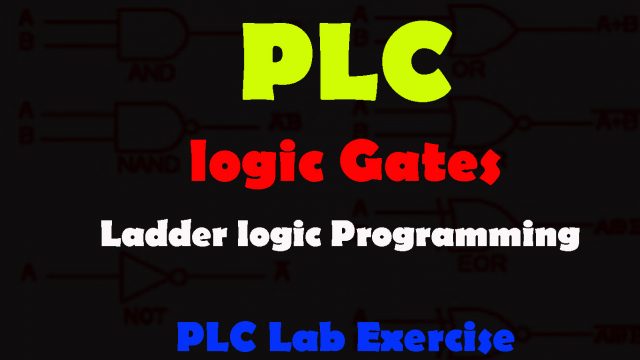 PLC Lab Exercise Logic Gates – If you are a student of Electrical, Electronics, or Software engineering, etc, then you probably know about the importance of Logic gates and that’s the reason you are here because you want to learn more about the Logic gates and how these Logic Gates are implemented in the PLC ladder logic diagram/programming whatever you call this.

We know from the books we studied “Logic Gate is building block for Digital Circuit”. A logic gate takes Binary Input in the form of 0 or 1 and gives a Binary Output based on the Input provided; the output of the Logic Gate is also in the form of 0 or 1. Due to its importance logic gates are most frequently used in the PLC ladder logic programming, and that’s the reason when you start learning the PLC Ladder logic programming, the first thing that you are introduced to is the Logic Gates.

This is the PLC Lab Exercise Logic Gates tutorial, which explains how to use the most basic Logic Gates in the PLC Ladder logic programming. For this PLC Lab Exercise Logic Gates, you don’t need to purchase a PLC. We will use be using the WinProLadder PLC ladder logic programming Software. In this software, we can write our ladder logic programs and we can also run simulations. I have a separate Tutorial on; how to use the WinProLadder Software and covered all the basics like for example how to start a new project, how to select a PLC model, how to use comments, how to write your first PLC program, and what is the best PLC for the beginners. So I highly recommend you should read this article and then you can resume from here.

In today’s Tutorial which is based on the “PLC Lab Exercise Logic Gates”, I am only going to explain the Logic Gates and how they are used in Ladder Logic Programming. In this tutorial, we will cover the following gates

Without any Further Delay, let’s get started!!!

Before I explain how these Logic Gates will be used in the PLC Ladder Logic programming, first I would like to tell you, that these Ladder Logic Programs will be written for the Fatek PLC FBs-14.

A NOT Gate is usually known as the inverter or Buffer is a logic gate that implements logical negation, in simple words the NOT Gate is used to convert 1 into 0 and similarly 0 into 1. The NOT Gate takes only 1 input and gives only one output.

This is how a NOT Gate is implemented in the Ladder Logic programming. As you can see in the pictures above when there is no input the output Y0 is high, while for high input we have low output at Y0.

I hope that now you have an idea of how the logic gates are used in the PLC Ladder logic Programming. I am leaving the XNOR Gate Truth Table and the XNOR Gate PLC Ladder Logic Diagram as an assignment for you. Let me know in the comment the output of the XNOR gate.

For more PLC and SCADA based projects subscribe to my Website. You will get a notification email, each time I upload a new article. If you have any question let me know in a comment.