A tube consisting of five electrodes is called a pentode.

If an additional grid is inserted between anode and screen grid in order to eliminate the unpleasant effects of a tetrode (i.e. negative resistance characteristics on low anode voltage and secondary emission), the tetrode tube becomes pentode. Through pentode tube, different drawbacks of a tetrode can be overcome. And different advantages of tetrode (low grid to anode capacitance, high amplification factor and high-power output) can also be achieved. This additional grid is called suppressor grid, grid 3 or G3.It is normally connected with cathode either inside the tube or from outside. Thus, this additional grid gets negative with respect to anode. Due to the grid being negative, the secondary electrons emitted from anode after forcefully crossing the negative field of suppressor grid, instead of reaching screen grid, prefer to retreat back to anode. The secondary emission of anode though does not stop altogether due to this grid, the process of screen grid attracting anode electrons towards it, stops, however. Therefore, unlike tetrode, characteristics curves of pentode are not curved or tilted.

The construction and specifications of a pentode tube has been shown in the below figure. From construction point of view, a pentode tube consists of 5 electrodes, first of which is the cathode, second control grid, third screen grid, fourth suppressor, and fifth anode. The grid closer to the cathode is the control grid, then there is a screen grid and the third grid is the suppressor grid. The task of which is to close, stop or suppress the secondary emission of the anode (due to which it is called suppressor grid). The mesh of the suppressor grid is scratchier and has more open holes compared to the mesh of the control grid and this plate is very close to the anode. Unlike tetrode, pentode does not fully encompass screen grid for shielding purposes, because there is a risk of suppressor grid’s utility becoming less. Suppressor grid is placed between screen grid and plate so that all advantages of screen grid could be availed and simultaneously, the dangerous effects of electrons attracting towards screen grid through secondary emission could also be averted. Thus, a pentode includes all the benefits of a tetrode (e.g. low grid to plate capacitance, high amplification factor, and high-power output)

When pentode is used as an amplifier, a control grid is used to control plate current. Screen grid, which has been provided fixed positive voltages, is used to minimize control grid to plate capacitance. And suppressor grid, which is connected directly or indirectly from within or outside with cathode, provides cathode potential. It is effective in abolishing the unnecessary impacts of secondary emissions. Whereas, anode and cathode in pentode also work like cathode and anode found in other tubes.

As a negative potential exists on suppressor grid according to plate, therefore it pushes secondary electron emitted from plate back towards the plate. This operation continues despite the existence of greater potential on screen grid compared to plate. In this way, effects of secondary emission come to an end. And the dip or curve found in the characteristics of tetrode plate also finishes, due to which the range of useful operation further increases. The shielding between plate and control grid become more effective due to the presence of suppressor grid and thus control grid comes to a more commanding position i.e. the controlling capacity of control grid further improves. Resultantly, amplification factor boosts up. Due to maximum amplification factor (ranged 100-500) pentode’s voltage is most widely used as amplifier.

The action of Suppressor Grid in Pentode 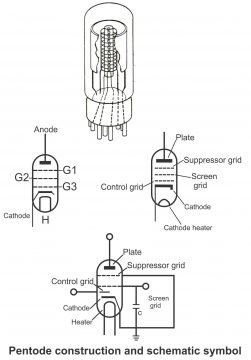 Due to the presence of suppressor grid, the shielding action between anode and control grid increases further and thus the mutual capacitance between anode and grid further declines. As a result, anode current is more independent from anode voltage in pentode as compared to tetrode. As anode voltage has very little influence on anode current due to a high screening, therefore anode resistance and its amplification factor in pentode, is quite high.

In order to know the static attributes of a pentode, the suppressor grid is always kept on cathode potential, while the screen grid is provided a constant voltage. The changes taking place in plate current through providing control grid a constant negative value and increasing plate voltage step by step are depicted by a graph in the shape of curves. As has been shown by the pentode’s characteristics curves drawn between anode voltage and anode current is first in the below figure. Thus, a new curve ensues as a result of a grid voltage and different curves are drawn on various grid voltages. is second in the below Figure also shows the circuits through which such characteristics curves could be understood and drawn. According to the circuit shown in the figure, the value of Q is kept constant; R is adjusted on a suitable control grid circuit, while plate current is noted through changing the value of P. 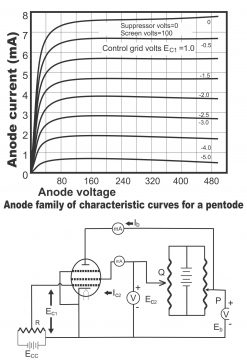