As its name implies, multi-electrode valves are values or tubes consisting of more than one grid, due to which the acquisition of desirable characteristics, which cannot be achieved from triode, becomes possible. In other words, m.e.v tubes help in overcoming the deficiencies found in triodes.

However, screen grid is relatively loose and it is located between control grid and anode. It encompasses anode almost completely. It acts as a veil between control grid and anode that’s why it is known as a screen grid or just screen. As this grid was invented after grid control, it is also called grid 2 or G2, whereas control grid is called grid 1 or G1. It acts as an effective electrostatic field between anode and control grid. Its connections are put on pins at the bottom of tube. Normally, anode voltage keeps changing in tetrad tube; however, screen grid voltage remains constant. The structure and composition of tetrad has been shown in figure 1.16.

The necessity of invention of tetrad was felt because when triode tube is used as a radio frequency amplifier, a capacitance develops between triode grid and anode, the value of which is very low. Due to which the operation of amplification either becomes unstable or it fails completely and oscillation generated in amplifier. We know that greater the frequency, the lower will be the magnitude of reactance developed through capacitor. 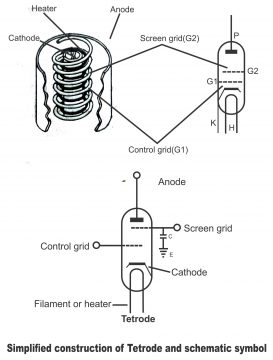 That’s capacitance reactance and frequency are mutually inversely related i.e. XC= 1/2 fc,as a result, some portion of radio frequency voltage produced on anode, returns back to grid. The returning of circuit voltage back to it back is called feedback. The unpleasant effect of this feedback results in unstable operation of tube. The capacitance present between grid and anode has been shown in the figure through a diode line.

The value of capacitance from grid to anode in a triode normally ranges between 2-5 micros – micro farad. However, through fixing additional shielding electrodes in triode gives it the shape of tetrad and this capacitance reduces to 0.01 micro-micro farad. In this way, feedback operation finishes very effectively and using a radio frequency in amplifier, stable outcomes are achieved via tube. Effect of anode voltage on space charge ceases by reducing inter-electrode capacitance via screen grid. Further, variations in plate voltage also stop and anode current gets approximately stable/ constant. In this way, signal gain enhances.

In other words, the issue of feedback can easily be solved through screen grid. As screen grid is located between anode and control grid, it stabilizes the tube operation by removing capacitance existing between anode and control grid through effective shielding. Normally, screen grid is earthed through a large value capacitor (as shown in the figure). This capacitor provides an easy path to alternating voltages passing through screen towards earth. This capacitor is called screen bypass capacitor or just screen bypass. As the existence of screen creates hurdles in the flow electrons towards anode, it is therefore, necessary that positive voltages are also provided to screen. Screen grid not only reduces the mutual capacitance between anode and control grid. Its other great advantage is that it causes an unbelievable increase in amplification factor.

A Tetrode can also be operated like a triode. Its cathode is kept on earth potential. Control grid is supplied with lesser negative (bias) voltage whereas anode is provided sufficiently high (several hundred volts) positive voltage.  The screen grid of Tetrode also kept on high positive potential with respect to cathode, however; its value is small compared to anode voltage. The positive voltages of screen grid help electrons moving swiftly towards anode, while keeping them on its path and as such cooperate with anodes’ electro static field. Some of the electrons generate currents through striking with grid screen, which is not beneficial. However, many of the electrons succeed in reaching anode and create current through passing the pores of screen.

If anode voltage is increased further with respect to screen voltage, anode practically attracts all electrons coming from cathode. Further, in such a situation anode also start attracting electrons present on the screen grid and only those electrons are left behind on-screen grid, which are blocked and cannot pass through the screen. In such a situation, the value of anode current becomes too high (equivalent nearly to the total space current), while the value of screen current diminishes and it assumes a constant value. If a further increase is made in anode voltage, its impact is very negligible due the field effect of screen and anode current becomes nearly independent from the effect of anode voltage (in such a case, there will be no change on anode current of an increase in anode voltage) This characteristic of tetrode can be divided in the following 3 parts for the purpose of simplification.

The characteristics curves of tetrode clearly indicate that despite an increase in its voltage, a decrease occurs in plate current in the XY region (opposite to ohm’s law). This negative current characteristic is known as negative resistance, while the tube instead of being known for being an apparatus of energy consumption, is referred to as a source of power (that’s it produces power in such a situation). Under particular conditions, anode current cannot remain stable due to such a behavior of tetrode as oscillation is produced. That’s the reason that the value of anode voltage is increased so much, that it does not reach negative resistance region through drop, due the presence of signal voltages on the grid. (In order to overcome this deficiency of tetrode, pentode tube came into being) However, it has to be kept in mind that this negative resistance characteristic of tetrode is used in special oscillation circuits.

We know that by inserting a screen grid in tetrode tube a new problem comes up due to secondary emission. When the potential of screen grid exceeds plates’, several free electrons get attracted towards the screen. The plate current becomes lower due to this effect which also makes the working range of tube limited. Due to these undesirable characteristics, tetrode is used rarely. The following drawbacks are found in tetrode.