Amazon Purchase Links of the most commonly used tools:

A Diode is a two-terminal electronic component that allows the flow of current only in one direction. If a diode is installed in the other way round i.e. in the reverse direction, this will block the flow of current. The diode is therefore a polarized component. It has the + and – sides which are often called the Anode (+) and the cathode (-).  This means a Diode can’t be installed in any direction (e.g. the resistor which has no polarity).

The connections of the diode are called the anode (+) and the cathode (-), the cathode side has the silver band as well. A common one Type of application is the polarity reversal protection. When power any electronic device, you simply connect the positive and GND wires with the desired input terminals or power jacks. What would happen if you connect the Positive wire with the GND and GND with the Positive? If there is no diode used it will destroy the entire circuit for a portion of it. But, if a diode is used then nothing will happen. The diode blocks the flow of current in the event of polarity reversal and protects the circuit from further operations Damage.

While using electronic breakout boards you will understand this point. Because I accidentally damaged many sensors as many sensors do not come with the diodes, so when the power supply wires are connected in the wrong way, the sensor is damaged in no time. So, use diodes for polarity reversal protection.

When dealing with diodes, you should note that the diode has a certain forward voltage. Ordinary diodes that we use for our Circuits that use are mostly made of silicon and have a forward voltage of approx. 0.7 V. In the circuit planning, this means that 0.7 V of a supply voltage already drop at the diode. This must be taken into account while designing a power supply. There are various other possible uses for diodes:

A special form of the diode is the light-emitting diode or LED for short. An LED is considered to be one of the most basic electronics components. The designation comes from the English and stands for Light Emitting Diode, a light-emitting Diode. Unlike incandescent lamps, an LED does not have to glow in order to generate light. The LED generates light of a certain wavelength by accelerating electrons. As a result, LEDs only need a fraction of the electricity that one would consume an incandescent lamp. We also differentiate between the LEDs Anode and cathode. Normally the longer lead is the positive and the short lead is the GND. The LED is a live component. It means that a constant current source or a series resistor to limit the current to operate LEDs necessary is.

The LED (like the normal diode) needs a certain forward voltage, which is also called flow or threshold voltage. When the voltage reaches the threshold voltage or the forward voltage, the LED starts to light up. Depending on the level of the forward voltage a current flows through the LED. The characteristic of a diode describes typical behavior. Different LEDs have different voltage and current ratings, if the rated voltage is exceeded the LED is damaged permanently. To avoid any damage to the LED a resistor in series is used with the LED.

A simple example for determining the series resistance using the example of a white LED:

The LED has a forward voltage of 3.2V and requires a current of a maximum of 20mA. 5V is available as a supply voltage at the series resistor. So a voltage of 1.8V should drop and the current to 20mA be limited. So you know the excess 1.8V voltage difference must drop at the series resistor. The ideal current flow is also you with 20mA known. The only unknown remains resistance. Here comes that again Ohm’s law for use.

In the rarest of cases, you will get exactly the resistance with the calculated value to have at one’s fingertips. Simply choose the next higher one here. The forward voltages of colored LEDs also differ according to their Color values ​​(see table 1). However, you can always find out the exact value in the Datasheet of your LED.

In my case I use the 330-ohm resistor, this one is easily available, and ensures the long term working of the LED. As per the calculated value, you can also use a 100-ohm resistor, the LED will be much brighter.

LEDs can be used in many ways, e.g. when:

A capacitor is an energy storage device and is one of the most important basic electronics components. In the simplest case, there is a capacitor made of two parallel conductive metal plates covered by an insulating layer which is also called dielectric. The amount of charge on a capacitor is called capacitance and is measured in the unit Farad (F). How high the capacitance of a capacitor depends on several factors. On the one hand, the distance between the plates plays a major role, as does the area of the plates as well as the material of the dielectric. There are many different capacitors Designs and types of manufacture. Common types of capacitors are ceramic capacitors, foil, and electrolytic capacitors.

If you want to study in detail about what is a capacitor, its types, uses, and working?

A capacitor is often used as a buffer or protection against voltage spikes. On the Raspberry Pi, you will find an electrolytic capacitor directly behind the Micro USB socket. This primarily dampens voltage peaks from the power supply unit and compensates for short voltage drops thanks to its property as an energy storage device out.

You can also see two 470uF Decoupling capacitors at the input and output sides of the 7805 voltage regulator. 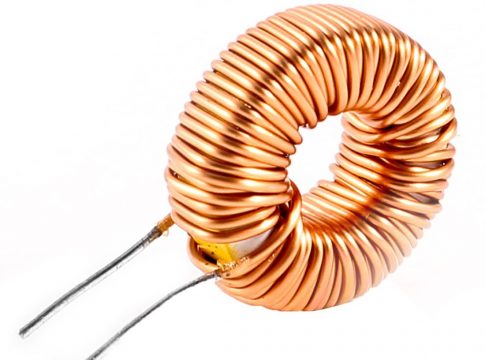 The coil also serves as an energy store but behaves completely different from the capacitor when used with the DC voltage. The coil is an inductor and is measured in the unit Henry (H). A simple coil consists of an iron core wrapped with the copper wire. If a DC voltage is applied to a coil, the current flows through the coil and only builds up a magnetic field there. To put it simply: the current flowing into the coil takes some time until it flows out of the coil again. If the magnetic field of the coil is built up, so the current flows almost unhindered through the coil. The word almost suggests that it does there is something that opposes the current. On the one hand, this is the line resistance stand of the copper wire, on the other hand, the effect of self-induction. This works against the current flow of the coil and represents an inductive resistance (Lenz’s Law).

The effect of energy storage is when the supply voltage is switched off clear. If there is no input voltage at the coil, the magnetic field builds up the bobbin. The regression of the magnetic field creates a current flow, which is maintained for a short time even after the voltage has been removed. There are also many possible uses for coils. For example, they serve as:

In principle, the transistor is an electronic switch and is considered to be the most important electronics component. A transistor is just like an ordinary mechanical switch but both are operated in different ways. A mechanical switch is controlled through some physical approach, like you turn the switch ON and OFF with your hand, etc. While a transistor can be turned ON and turned OFF through a signal. A transistor is a three-terminal semiconductor device. It has three terminals Emitter, Base, and Collector. A transistor has two types PNP Type and NPN Type. So, basically, a transistor is a BJT “Bipolar Junction Transistor”. If sufficient current flows into the base, the distance between the collector and emitter offers low resistance and lets the current flow.

It gets a bit more extensive if you consider the different types of transistors. On the one hand, there are bipolar transistors: These consist of three differently doped layers. For one, there would be a combination of P (positive) – N (negative) – P (positive) possible. In this case, one speaks of a PNP transistor. If the layers are built up in the order N-P-N, then it is an NPN transistor. The difference between the two types is the polarity:

You can distinguish the transistor types in the circuit diagram by the direction of the arrow in the symbols (see Figure1).

Other types of transistors are field-effect transistors or FETs for short. These transistors differ in their physical operating principle. So is for that In contrast to the bipolar transistor, driving the FET does not depend on the current, that flows into the control input, but the voltage that is applied there. As well as the connections of a FET transistor are called differently. The control input is the gate, the switching path lies between the source and the drain. 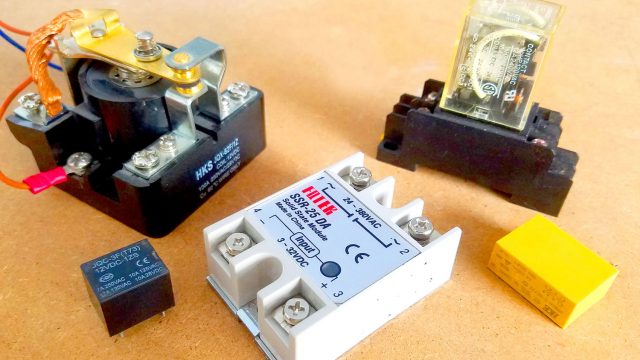 A Relay is an Electromechanical device that is used to control an AC or DC load. The functionality of a relay is between a mechanical switch and a transistor. To switch the Relays, it requires the voltage which is used to energize the relay coil to make the magnet inside the relay and mechanically connect the switching path. If the magnet is removed i.e. when no voltage, the contacts separate again.

Since there is mechanical movement in the relay, the reaction speed in a relay many times slower than that of a transistor. Hence be Relays mostly used to switch large loads. Likewise with a relay AC voltage can also be switched. Due to the physical separation of the control magnet and switch contacts, the control circuit is completely galvanically isolated from the working circuit. At a Short circuit in the relay’s working circuit remains on the control side (e.g. the Raspberry Pi) completely free of damage.

Also due to the structure of the relay, you will hear a click when the relay switches. In the case of many designs, the switching status can already be seen optically. Relays are available in a wide variety of sizes and designs. They also have relays over almost any number of connections. There are versions with changers, break contacts, and Normally open contacts and combinations of all three. If you want to use a relay in connection with the Raspberry Pi, it is important that you install a free-wheeling diode in the control circuit (see Figure 2). The magnetic coil in the relay is one of the inductive loads. Here it is necessary to limit possible voltage peaks by means of a freewheeling diode D1.

I would like to another electronic component in the list of the basic electronics components which is a Resistor. Recently I uploaded to articles on,

What is a Resistor, its types, and uses?

If you are learning electronics then I highly recommend reading the above two articles on the resistor, as it explains the extreme basics.

Types of Relays and how to use them?

What is a Capacitor and its types?

What is Inductor and its Types