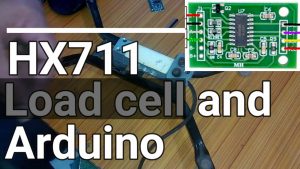 HX711 and Arduino- This tutorial is based on the HX711 breakout board, Arduino Uno and a Load cell or Strain gauge. This tutorial explains step by step how to use the load cell or Strain gauge with the HX711 breakout board and how to write a basic Arduino Uno program to access the values and print them on the Serial monitor. The HX711 and Load cell are used in building a weighing scale. The same program which is used in this tutorial can also run on Arduino Mega.

Read my latest article, in which i used the HX711 with the Nodemcu ESP8266 Wifi Module and designed an IoT based Weighing Scale. With the help of this project, the weight can be measured from anywhere around the world using the Blynk application.

Recently, I designed a highly accurate version of the Weighing Scale using ESP32 WiFi Module. I was simply amazed with the final measured values. I highly recommend read this article.

Video Available at the end of this Article.

Hx711 has different gain values which are selectable 32, 64 and 128.  Any of the mentioned gains can be selected and used in the programming. 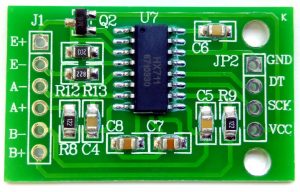 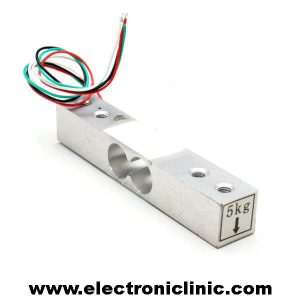 A load cell or a Strain Gauge is basically a  Transducer which generates an electrical signal whose magnitude is proportional to the force applied. The various load cell types include Pneumatic, Hydraulic, and strain gauge.

For the Easy interfacing, you can solder some jumper wires with the contacts of the HX711 break out board for this you can use male to male type jumper wires. After the soldering makes sure you check the short circuit using the digital multimeter.

As you can see in the picture above, the Load cell has an Arrow. While installing the load cell make sure this arrowhead points downward. For the best performance install the load cell or strain gauge on a metal base and secure the load cell with the screws, so that there is no movement.

Before you Start the Programming, first of all, make sure you download the necessary library. The HX711 library can be downloaded from the GitHub, the download link is given below.