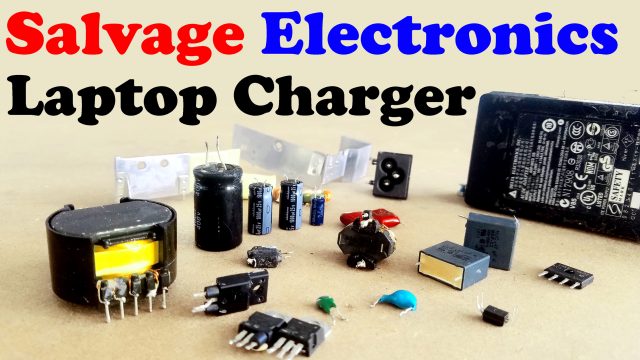 Note: for the de-soldering and explanation watch video tutorial given at the end of this article. 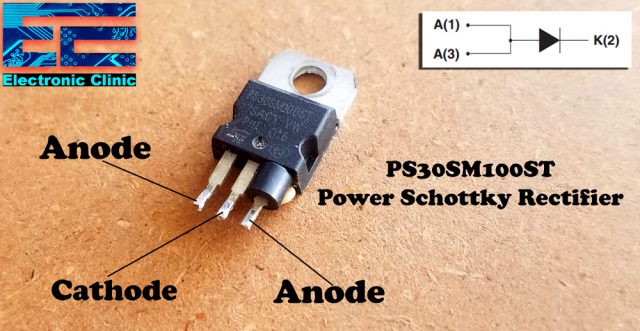 First, let’s start with the PS30SM100ST Power Schottky Rectifier. I salvaged two of these. This single Schottky rectifier is suited for high frequency switch mode power supply. This device is intended to be used in notebook, game station and desktop adaptors, providing in these applications a good efficiency at both low and high loads. As per the datasheet, Pin number 1 and pin number 3 are internally connected and are the anode pins, while pin number 2 or the middle leg is the cathode. So this is basically a dual Schottky diode with common cathode and is used in high current applications. This device has an average forward current of 30A and Repetitive peak reverse voltage of 100V.

The package consists of two diodes in parallel increasing the current rating and reducing the package size and cost. Since the Schottky diodes are faster and efficient (low voltage drop) they are commonly preferred over normal diodes provided the reverse voltage is need not be high.

So, this is basically a full wave rectifier, as you can see 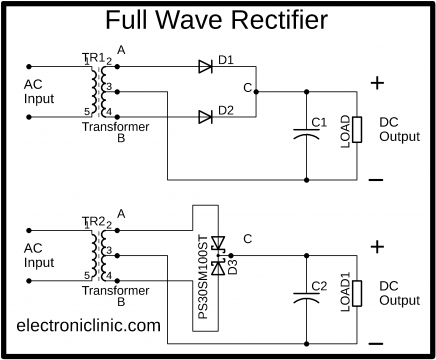 This is the Full wave rectifier, which I am sure you are quite familiar with, as you can see the two cathodes are connected together at point C and has two anodes A and B are connected with the secondary side of the centre tapped transformer. So, now I am sure you know how to use the PS30SM100ST Power Schottky Rectifier. 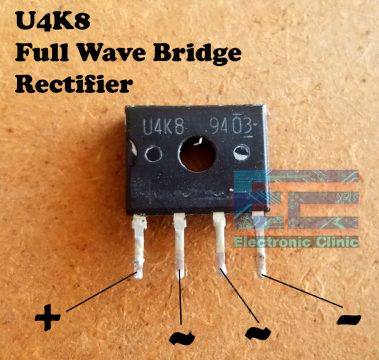 As per the datasheet the U4K8 Full Wave Bridge Rectifier has the maximum repetitive reverse voltage of 800 volts, Maximum RMS bridge input voltage is 560 Volts, and the DC reverse voltage is 800 Volts. The average rectified forward current is from 3 to 4 Amps.

The first leg is the +, the middle two legs are the AC input lines, while the 4th leg is the – or GND leg. It’s use is just like the other bridge rectifiers like the one you can see below.

This one also have 4 legs which are labeled with the AC, +, and – signs. I have used this type of bridge rectifier in so many projects; I will add a few links at the end in the related projects section, if in case you want to check. 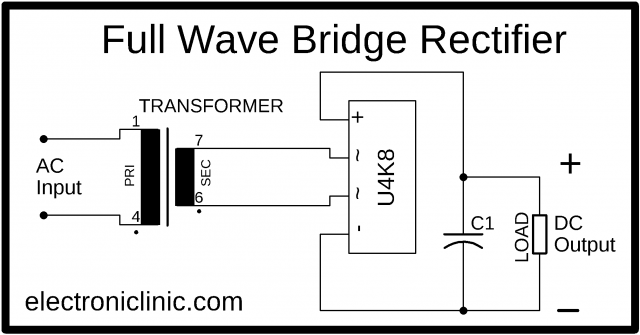 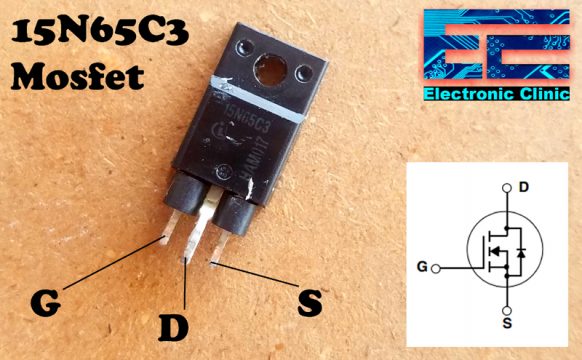 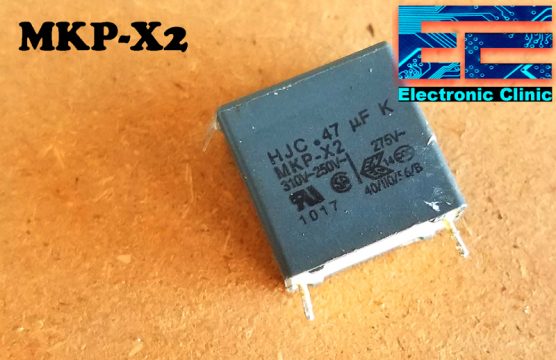 The TTC 474 is a thermistor “Temperature Sensor” very cost effective and has a wide resistance range of 470000 Ohms. The operating temperature range is -40 to +125C. This temperature sensor can be used in different projects like for example, 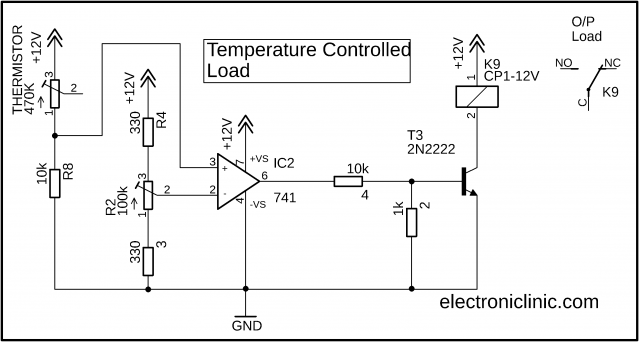 V2 = the voltage coming from the TTC 474 Thermistor and 10k resistor.

The V2 varies as the temperature varies.  When V1 > V2 the output get High, and at the output we get voltage which is approximately equal to the input supply voltage which in our case is 12 volts. The output voltage of the LM741 IC is not exactly 12 volts it can be around 10 to 11 volts. So when the output is high we get around 12 volts.

At this point we are able to differentiate if the temperature is increased or decreased and accordingly we get 0 volts and 11 volts approximately.

Now the next step is to use this output voltage to control a Relay which can be used to control a light Bulb, Buzzer or an AC Fan or a DC Fan. So now we will make a driver for the relay. But if you look at the datasheet you will find that the output current of the LM741 IC is 25milliamps which is not enough to turn on a 12v relay. The relay I have used in this circuit needs around 32milliamps. So it means we will need some kind of driver to control the relay.

As we know the output voltage of the LM741 IC is around 12 volts when in ON state so if this voltage is directly connected with the base of the 2n2222 NPN transistor it will completely damage the transistor. Now to solve this problem we will need to use a voltage divider to reduce the voltage. So that’s the reason I used 10k and 1k resistors in series. Thus the base voltage never exceeds 6 volts. Now we can turn ON and Turn OFF the 2n2222 NPN transistor without any problem. The transistor will be used to control the 12v relay. This relay is of the type SPDT “Single Pole Double Throw”.

This relay can be used to control any type of bulb, AC or DC. You can also connect a buzzer instead using a bulb. Now it entirely depends on you for what purpose you are going to use this Circuit.

This is the PC123 Optocoupler. 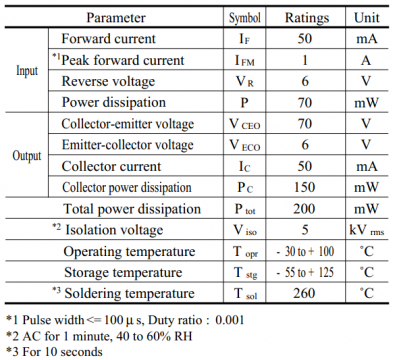 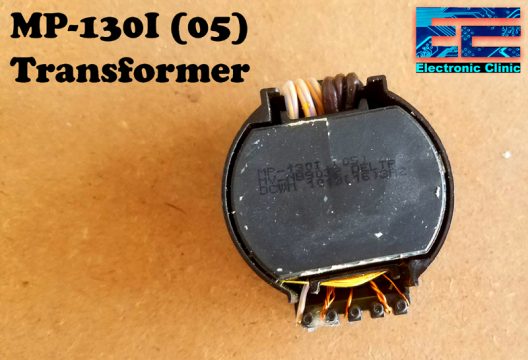 This is the MP-130I (05) Transformer with multiple taps. Using this transformer we can make a power supply for the Arduino and power up other electronic devices.

The other components that I salvaged were the Polarized and non-polarized capacitors, some heat sinks, some coils and an AC plug.

I hope you have learnt something. If you have any questions regarding these components you can let me know in a comment.

use of bridge rectifier in Piezo electric generator: