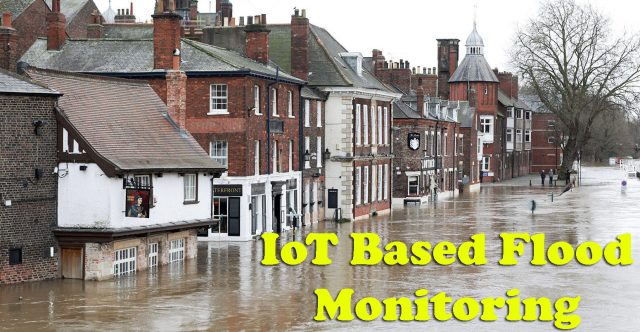 A few days back I got an email from Sneha Shinde asking for the IoT early Flood Detection and avoidance system. I found this project very interesting and decided to build the one using the internet of things based technology.

If you search on the Google you will find different IoT-based Flood monitoring projects based on the ThingSpeak IoT platform, which I personally didn’t like. Those projects send the Flood alert values after every 10 or 20 seconds. These are long delays, due to which the water levels cannot be monitored in real-time. We need a quick system that can send the values at least every 1 second.

Amazon Purchase Links of the Components used in this project:

Why we need an IoT based Flood Monitoring System?

In the peninsular countries like Pakistan and India, with extreme weather and climatic conditions, the occurrence of heavy rainfall is normal. Multiple times, the arrival of very heavy rains results in the heavy discharge of water or because of the sudden melting of the glaciers due to global warming.

Especially, in the monsoon which normally begins in the mid of June and lasts till October, thousands of people lost their lives by drowning and their habitats were collapsed. The leftover were evacuated by the state and central disaster relief authorities. The severe water logging brought daily work to halt. In order to save the lives of the people, their habitat and the economy, the major step is to monitor the data on real time basis and if the situation is reaching a certain threshold, then alert is to be provided to the concerned person living in the area which is currently at risk. Even if it is difficult to abandon the natural calamity but the mandatory steps are to be taken by the government agencies to shift the population to a safe region and the losses will get reduced to less than 30%.

In this modern era, there are multiple systems working and are deployed at different locations but the alert notification is passed to government agencies and this ends up in slowing down the process. The reason behind this is that flood is very spontaneous disaster and government agencies have to follow multiple steps before reaching to a decision. In this case, awareness among the people is very necessary along with the government officials. So, that a combined and better result will be achieved.

In my proposed system the water level can be monitored in real-time using a cell phone, no matter you are in a meeting, outside your home, etc. You will be able to see everything in real-time. You can check the App at anytime and find out about the water level, if it’s increasing or decreasing. Different level can be defined. Alert messages are generated automatically when the desired conditions are met. 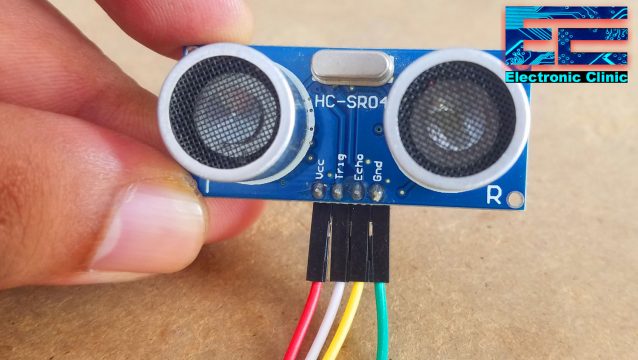 This is the HC-SR04 Ultrasonic Sensor which will be used for monitoring the water level. This Module has a total of 4 male headers clearly labeled as VCC, Trig, Echo, and Gnd. The connection of the Ultrasonic Sensor with the Nodemcu ESP8266 is explained in the Circuit Diagram. 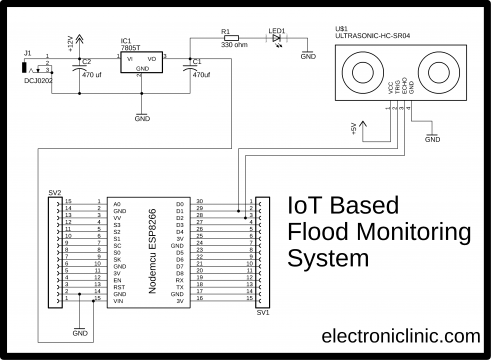 J1 is the female power jack and this is where we connect the external power supply used to power up the entire circuit. The external supply can be a 12V battery, an adaptor, a solar panel, etc. The voltage and ground pins of the female power jack J1 are connected with the Input and ground legs of the LM7805 voltage regulator. Two 470uF decoupling capacitors are connected at the input and output sides of the voltage regulator.

A 330-ohm resistor is connected in series with a 2.5v LED. This is a current limiting resistor. This is the circuit power ON LED. It has no role in this project, except to let you know that the circuit is powered up. 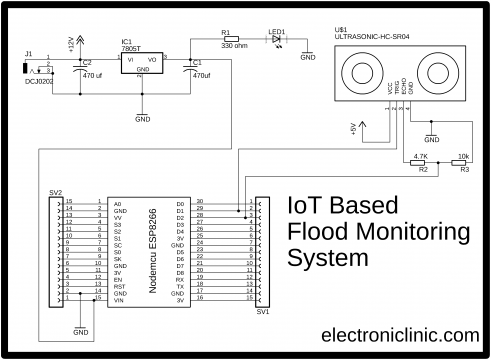 Two resistor R2 “4.7K” and R3 “10K” are connected in series which makes the voltage divider circuit. This simply works as the voltage level converter; it converts 5 volts from the Ultrasonic Sensor into 3.3Volts.

You can also find Ultrasonic Sensor modules that can be powered up using the 3.3volts. Then you won’t need the voltage divider. You might be wondering about the SV1 and SV2, these are the female headers.

First I checked all my connections on a breadboard. After, I was satisfied with the results then I designed a PCB board for the Nodemcu ESP8266 WiFi Module, which I can use as the development board.

To reduce the wiring, and to make everything look good, I designed my own PCB board for the Nodemcu ESP8266 Wifi module using the CadeSoft Eagle PCB designing software. 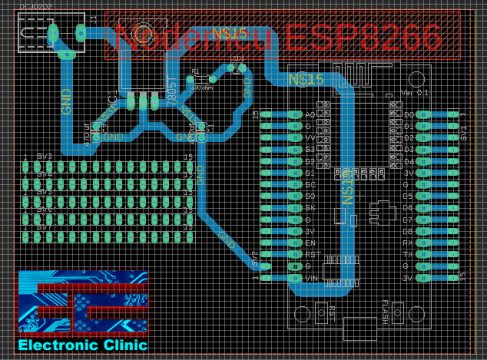 After I completed the PCB design, then I sent my PCB board Gerber files to the PCBWay Company for making High-Quality PCB’s. If you don’t know how to generate the Gerber files then watch my video given below.

This is how the final PCB board looks like. This PCB is manufactured by the PCBway Company. As you can see the quality is really great, the silkscreen is quite clear and the black solder mask looks amazing. I am 100% satisfied with their work. The download link of the Gerber files is give above.

Then I completed the soldering and double checked all the connections for any short circuits. 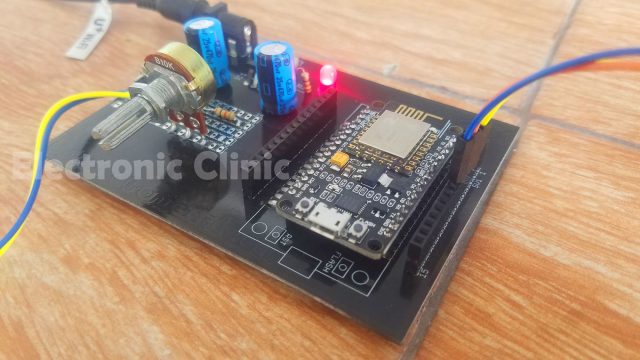 After the testing, then I checked the board with the simple led program to confirm my hardware works.  When I was completely satisfied with the hardware. Then, finally, I interfaced the Ultrasonic Sensor with the Nodemcu ESP8266 as per the circuit diagram already explained. 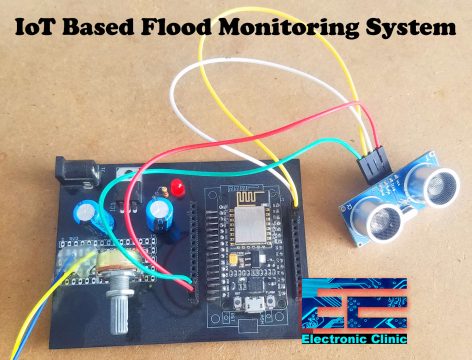 Our IoT Based Flood Monitoring System Hardware is ready and now we can start with the programming. The Nodemcu ESP8266 WiFi module can be programmed using the Arduino IDE, but prior to the programming, you will need to install the ESP8266 board.

After, I installed the Nodemcu ESP8266 Board, and download the Blynk Library. Then I was ready for the programming. The download link of the libraries used in this project is given below.

As usual I started off by adding the necessary libraries.

The Trigger pin and Echo pin of the Ultrasonic Sensor are connected with the Nodemcu ESP8266 D1 and D2 pins respectively.

The following two variables are used to store the duration and distance values.

I uploaded the code, and performed some tests. I was able to monitor the values on the serial monitor. For the testing, I placed an object in front of the Ultrasonic Sensor, changed the distance and I was able to get the distance values.

After, successfully running the code, then I started making the blynk application. Follow the same exact steps.

Make sure, you have downloaded and installed the Blynk application. 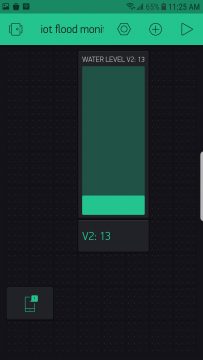 After I was done with the IoT based Flood Monitoring Blynk application designing. I powered up my hardware, and pressed the play button on the Blynk application. I kept moving my hand in front of the Ultrasonic Sensor and I was able to monitor the distance value and I was also able to receive the notification messages.

For the final testing of my project “IoT based Flood Monitoring System”, I fixed the Ultrasonic Sensor on top of the Plastic Bucket containing the Water. 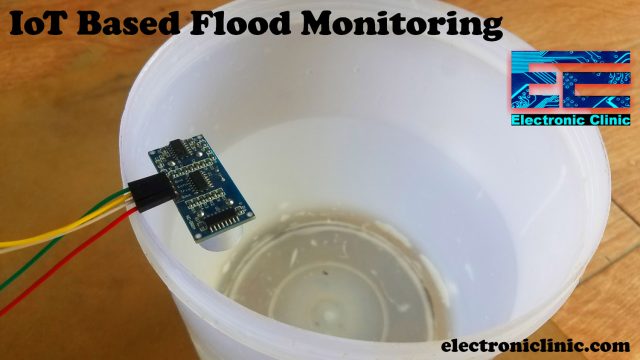 I powered up my circuit using a 12V Adaptor and opened my Blynk application and pressed the Play button. While my IoT based Flood monitoring application was connected with the Nodemcu ESP8266, I started adding the water, to increase the water level. I could monitor the water level in real time, I continued add the water till I received the notification. You can see this in the picture given below.

In the first image you can see the level was 16, then 13, then 11, and when reduced below 10 it generated the Alert. I tested this project many times and it worked perfectly. I hope you have learned something new from this project. If you have any questions regarding this project, let me know in a comment.