This mechanism is relatively simple as light will be blocked by particles suspending in the liquid.

The turbidity can be measured by detecting the amount of light going through the liquid sample.

The turbidity unit is measured in NTU “Nephelometric Turbidity Units” which is global standard. The larger the turbidity is, the cloudy of the sample is. Turbidity sensor connects to the microcontroller through an analog to digital converter through this A to D converter. 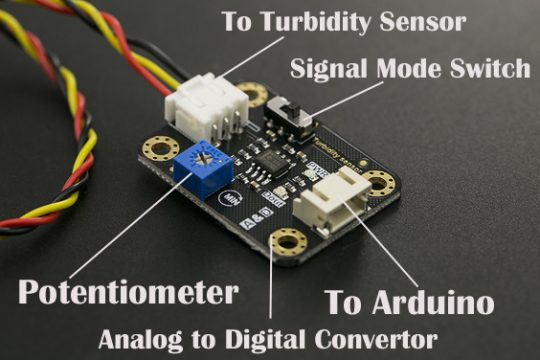 The output signal can be switched between analog and digital. Under analog mode the signal wire from A to D converter goes to the analog input pin on the microcontroller. The turbidity is represented by the voltage of the output pin.

Clear water with NTU less than 0.5 give us a voltage around 4.1 volts.

The larger the turbidity is, the smaller this output voltage will be. The voltage ranges from 0 to 4.5 volts. Under digital mode the signal wire from the converter goes to the digital pin of the microcontroller the sensor sends out a 5v signal when turbidity reaches a threshold value. This value can be adjusted by the on board potentiometer on the A & D converter. Turbidity sensor is often used in water quality monitoring.

In my previous articles, I covered

What is Water Turbidity- Dangers of Cloudy River and Drinking Water?

Water turbidity is an important measuring unit to determine water quality and describes the degree of water cloudiness.

Turbidity in rivers or lakes is often caused by human activities like construction, mining and agriculture. Storm water runoff after a rainfall can wash up sediments from urbanized areas, industries and farmland. 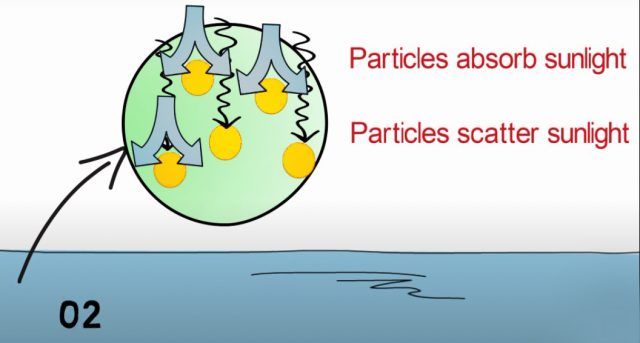 Suspended particles absorb heat from the sunlight and lead to water temperature increase. Also, a high turbidity scatters the light so that photosynthetic activity at deeper water levels is minimized. Both reduces the amount of oxygen which causes a decrease of aerobe microorganisms and deterioration of the self-cleaning effect of water. 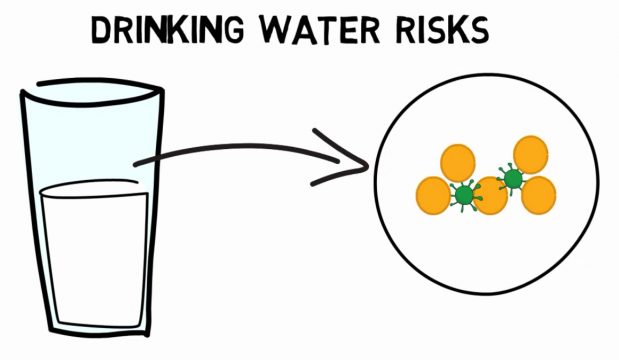 Turbidity in drinking water and tap water can cause diseases because viruses or bacteria can be attached to suspended solids. Even disinfectants such as chlorine or UV sterilization have only limited success at high turbidity levels. This is because suspended solids interfere with the disinfectants and act as shields for viruses and bacteria.

Tap water travels through miles of water supply pipes and can pick up cloudiness due to broken or dirty pipes. The WHO (World Health Organization) published that the turbidity of tap water should ideally be below 1 NTU. If you are unsure about the quality of your tap water, you can test it with a turbidity meter. This is what, this article is all about. We will design our own Water Turbidity Meter.

In wastewater treatment plants flocculants and coagulants are dosed to water with high turbidity. They alter electrical charges of particles so that they clump together and form bigger particles. The bigger particles are then settled down in sedimentation basins which are often equipped with lamella clarifiers for enhanced particle settling.

As you should learnt that the suspended particles in the water scatters the light. So we will use this to measure the water turbidity.

Turbidity measurement not only depends on the turbidity standard but also on the light source.

ISO 7027 stipulates an infrared source which lies in the non-visible wavelength range since colors only occur in the visible range the infrared measurement is not influenced by the medium’s color. 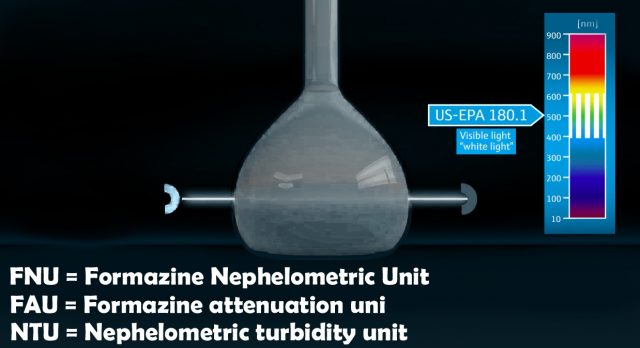 The most widely used measurement methods for turbidity are, 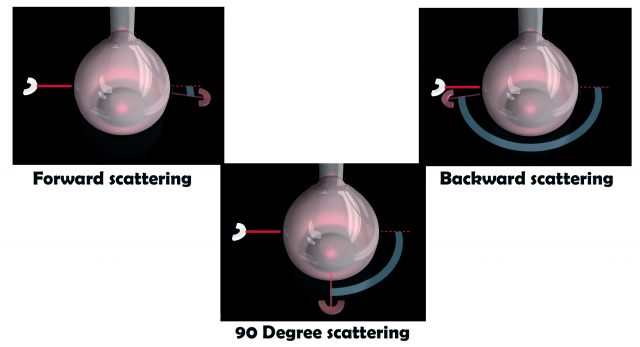 Here the detector is positioned at a right angle from the light source to measure the light scattered to 90 degrees from the incident light. This method is suitable for low turbidity values in applications with higher turbidity values. Sensors are used that measure back scattering at 135 degrees, for example, very turbid media contain so many particles that the main part of the light beam is back scattered, this means differences in turbidity can be detected much better in the back scattered light sensors that are equipped with four detectors measuring at 90 degrees and 135 degrees are able to cover a wide measuring range.

Now let’s take a look at the attenuation measurement also described in ISO 7027 here again a light beam is radiated through the medium. However in contrast to the scattered light methods the transmitted light is measured, because the detector is positioned in one line with a light source. This method is suitable for average to high turbidity values, because it delivers definite results and offers high reproducibility.

The signal curve of turbidity sensors depends on the method used when using scattered light measurement the signal curve rises up to a certain particle density because the light is scattered towards the detector. When the particle density increases further, the measuring signal weakens again, because the light is scattered so strongly that the radiation no longer reaches the detector. That’s why; scattered light measurement does not always deliver clear results. This phenomenon does not occur with attenuation measurement; here the signal consistently weakens with increasing turbidity.

Now, after explaining the very basics, now it’s time to start working on the Water turbidity meter. Thanks to the DFrobot for making this amazing low-cost water turbidity sensor.

Digital Output: High/Low-level signal (you can adjust the threshold value by adjusting the potentiometer) 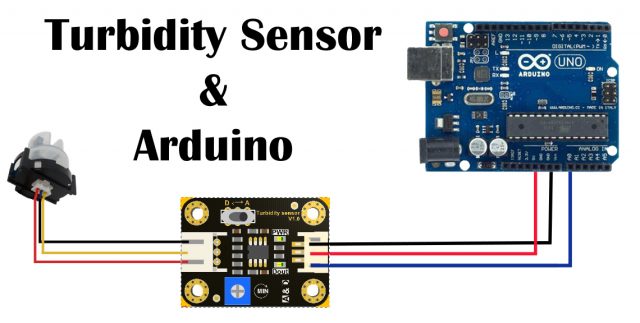 You can start with the following code. This program reads the Arduino’s analog pin A0 to which the Turbidity sensor is connected. This program simply converts the analog signal into the voltage. From this voltage we can decided if the water under test is clean or have impurities in it.

After uploading the above program. Simply open the Serial monitor, select the desired baud rate 9600. You should be able to see the voltage. If you can read the voltage then congrats you have successfully done it. Now you can continue with the testing. Go ahead select different liquids or you can fetch clean water dip the turbidity sensor and start adding mud or sand and you will see change in the voltage.

This time the signal mode switch is set to D and the Dout is connected with the Arduino’s digital pin D2. Now using the potentiometer “the Blue color thing” you can set a threshold value. So when the turbidity sensor value will increase or decrease than the threshold value, an output signal of 5V will be fed to the Arduino’s digital pin D2. So, at any given time, the Arduino will get 0 or 5V as the signal. Using this 0 and 5V information then you can turn ON and turn OFF some buzzers, or you can activate other circuits, you can switch ON 220Vac light bulbs, or you can turn ON a Water pump, etc. It’s totally up to you. For demonstration purposes, I will control the onboard LED available on pin 13.

Upload the above code and make sure the Dout wire from the A & D converter is connected with the Arduino’s Digital pin D2. The LED will turn ON and Turn OFF depending on the water purity. Start with clean water and start adding mud and you will see when the turbidity value will cross the threshold value the LED state will be changed. Of course, you can replace this led with a relay to control a pump or a buzzer to let you know.

So, now after covering the very basics, now it’s time to take this project to another level. This time we will display the water turbidity sensor values on the I2C LCD. This way you won’t need a laptop and you can monitor the values in real-time.

For real-time monitoring set the signal mode switch to A ”Analog”. Connect Dout with the Analog pin A0. For displaying the values you can use I2C 16×2 LCD to reduce the wiring. You can also use a regular 16×2 LCD but this will need more wires. So my recommendation is the I2C LCD. In Arduino SCL is A5 and SDA is A4. So, connect the SCL and SDA pins of the I2C 16×2 LCD with the Arduino’s pins A5 and A4 respectively. If you want to further reduce the size then you can also use I2C Oled Display Module. Anyhow, I will continue with the I2C 16×2 LCD.

Before, you start the programming; first of all, make sure you download all the necessary libraries. You will need the Wire.h and LiquidCrystal_I2C.h libraries. 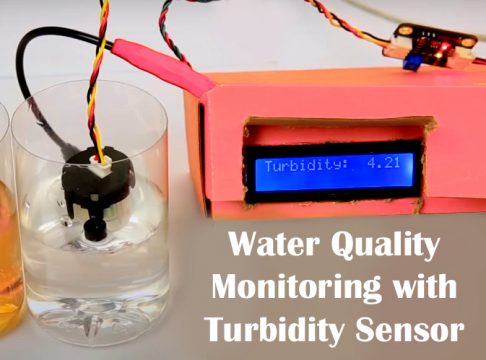 After uploading the above code. Simply turn ON your Arduino and you should be able to see something on the LCD. Now you can start with clean water. If the value on the LCD is 4.2 or 4.21 then there is no need to calibrate the sensor it’s working great. But, if you are getting a different value on the LCD then you will need to calibrate the Turbidity Sensor by adjusting the potentiometer available on the A & D converter circuit. Rotate the knob till you see a value of 4.2 or 4.21 and you are all set.

A graph from the DFrobot shows the relation between the NTU ”turbidity” and the voltage. 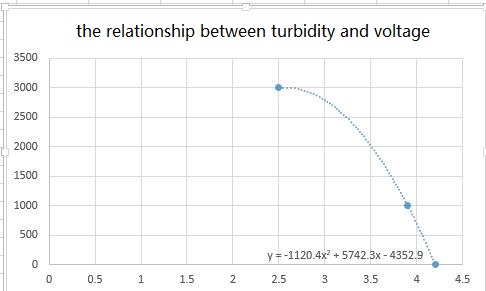 At the bottom of the graph, you can see this formula

Where x is the voltage, and I already explained how to measure the Turbidity sensor voltage

this line of code gives you the voltage.

Then we can use the following formula to convert the turbidity sensor Voltage value into NTU value. In the Arduino code we will simply write

So, using the above formula we can convert the Turbidity Sensor voltage value into the NTU value without putting a lot of effort. Let’s take a look at the final code.